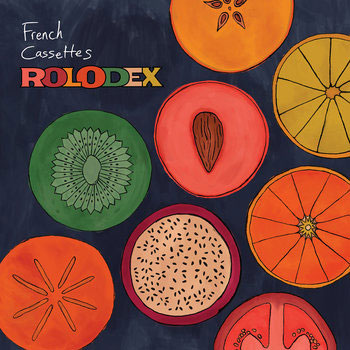 It’s been a lot of years and a number of different styles for San Francisco’s French Cassettes. But on the long-gestating Rolodex – released December 11 on Portland, Ore.-based Tender Loving Empire Records – the group gets it right.

Guitarist Scott Huerta formed French Cassettes in 2006. “We started having a concrete lineup around 2008,” he says. “That’s when we were like, ‘Okay, this outfit works. Let’s start playing some serious shows.’” His brother, bassist Thomas Huerta, has been with the group since its start, and the lineup has been “pretty solid with minor changes for more than six years.”

Huerta laughs when asked if French Cassettes’ current musical character resembles the vision he had for the band when it began. “I feel like I’m deserved a little slack here,” he says. “Because I was in high school!” At its start, the band modeled itself after what Huerta calls “semi-experimental psych rock like Mars Volta. We just wrote this really math-y, progressive rock stuff. I don’t know how well we succeeded.”

French Cassettes took its time finding a style that fit. “We even went through a stage in high school when we decided, ‘We need a horn section,’” Huerta recalls with a chuckle. “We had trombone and sax. They were awesome players; it was cool, and it worked for a while.”

Huerta doesn’t regret the group’s varying guises; they all led to where French Cassettes ended up. “I think a lot of indie bands get the temptation to make their own Arcade Fire,” he says. “We got to do ours for awhile, and then we were like, “’All right: four piece, keep it simple, pop songs.’”

That happened by 2011, when French Cassettes released its debut EP, Summer Darling, followed in 2013 by a full-length, Gold Youth. Those records reveal few hints of the band’s early prog and horn-pop approaches; instead, there’s an emphasis on catchy melodies, with Thomas Huerta’s hyperactive, sinewy bass lines adding complexity to straightforward, energetic pop tunes.

And while some seven years would pass before French Cassettes returned with Rolodex, the pure pop values have remained at the center of the band’s sound. Yet there are subtle changes: at times, the nervy vibe of Gold Youth feels like a cheery rethink of Radiohead, but Rolodex is the sound of a confident band that has found its footing. The skittering, glitchy percussion on tracks like “Utah” gives the songs an edge, but Huerta’s lush melodies steer the album confidently back into ear candy land.

The complexity is there in the songs, but it’s understated. “On Gold Youth, we picked a theme,” Huerta explains. “Rock out from the first five seconds of the song.” In contrast, many of the tracks on Rolodex change things up, even inside the framework of under-four-minutes pop tunes. “The beginning won’t sound anything like the end of the song,” Huerta says.

Seven years is an eternity in the world of popular music, so it’s fair to ask why French Cassettes took so long to release its second album. “I hope that people assume that ‘They needed to take the time because they wanted this to be the one.’” Huerta says. But he admits that the long period between albums wasn’t planned. It had more to do with the fact that the band members live in different cities, and because they were experimenting with different methods of writing songs.

“Instead of rehearsing and writing for ten hours every Sunday in our apartment in San Francisco,” Huerta explains, “we didn’t get in the same room nearly at all to write.” For his part, he was living in a closet – “a big upgrade from the pantry where I had been living before,” he says – writing alone. 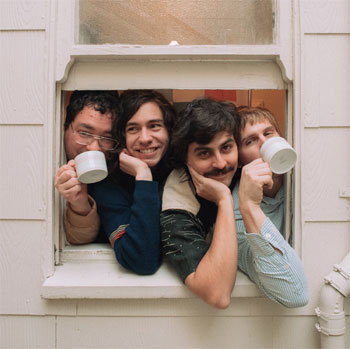 “Imagine just staying up until 7 a.m. and you’re tired out of your gourd and just trying to write and record demos alone,” Huerta says. “A lot of weird stuff came out of those little closet demo sessions.” But he cautions other songwriters against following his lead. “I would never recommend it,” he says. “If someone’s trying to get a song done under two years, that is not the way to do it, for sure.”

The band demoed some of the songs before hitting the studio to make Rolodex, and many of the tunes found their way into the group’s live set. Huerta admits that some of the band’s longtime friends and fans might hear the new record and say, “They played that song at a show four years ago!”

But Huerta says that he learned some important lessons in the five-year period in which the Rolodex songs were written. “I [used to think], ‘Oh, I gotta write a hook. I gotta write a melody. As long as you write a good melody, you’re good.’” But he eventually discovered that lyrics are more important than he had thought.

“I never really thought I had anything to sing about, because I didn’t think my point of view was interesting,” he admits. “For Gold Youth, I was like, ‘Oh, I’ll just sing about whatever.’” But he was inspired by the work of groups like Magnetic Fields, and says that he realized, “Lyrics can be ten times more powerful than the perfect melody or the perfect hook.” So during those pantry and closet writing sessions, Huerta put more effort into the words. “I was like, ‘Eh, just try to turn it up a little bit. Talk about stuff honestly, at least. Then if they suck, they suck. But at least it’s an honest account.’”

Rolodex’s production aesthetic has an intimate, you-are-there feel that reinforces the honesty Huerta aims to put across. And the album balances the increased lyrical emphasis with the part of French Cassettes’ style that was already working: catchy melodies. The group’s press materials go do far as to label French Cassettes “power pop,” a term that can sometimes paint artists into a stylistic corner. But Huerta doesn’t see it that way; he thinks of it more as pop with a little something extra. “We try to pack a lot into each song,” he suggests, “rather than just find one thing that’s like, ‘Oh, that’s cool’ or ‘That’s catchy,’ or whatever and just ride that into the sunset.”