WNC Music Community Faces the New Challenges in a Variety of Ways
There’s no escaping the fact that musicians have been hit hard by the global pandemic. While many musicians turn to songwriting and recording as creative outlets, it’s often live performance that forms the foundation of their livelihood. But with creativity and inspiration often comes innovation. While everyone in the music industry waits out the shutdowns, musicians have found different ways to express themselves, connect with audiences, and make ends meet.

Bluesy Americana singer-songwriter and recording artist Ashley Heath’s strengths as a musician are matched by her work ethic. “Before the pandemic, I was able to completely support my lifestyle with my music,” she says. She averaged more than a dozen live shows per month, and says that with her band the Heathens, she entered 2020 with a full live tour schedule. That all ended abruptly in March. “I’ve definitely lost thousands of dollars due to COVID-19,” she says. 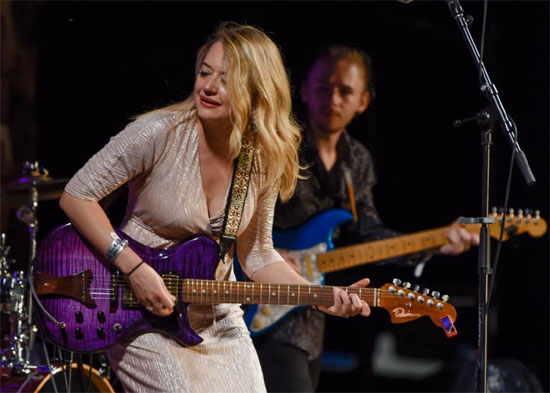 Heath took advantage of unemployment compensation newly offered to self-employed persons, as well as North Carolina’s PUA (Pandemic Unemployment Assistance). Those relieved some of the financial pressures, but she still sought ways to keep the music going. One of her chosen approaches has been livestream performances on Facebook and Instagram. “We’ve played livestream shows at Archetype Brewing, the Orange Peel, and The Grey Eagle,” she says, and she found the venues’ health and safety measures impressive. “I felt very safe in those environments,” she says.

Heath says that while the livestreams brought in some money during Phase One of the state’s lockdown, “as soon as Phase Two started, the revenue went down.” But by that point—May 22—she had already launched a new initiative. Dubbed “Singing Grams,” the concept for the donation-based program is simple: as she wrote on Facebook, “Dedicate a song to someone you love, and I will call them and sing it to them!” Heath found herself consumed in a flurry of Singing Gram activity around Mother’s Day.

For now, the Singing Grams and livestreaming represent Heath’s only performances. Speaking for herself and the Heathens, she says, “We miss and love playing live music, [but] we’re probably going to wait this out until the end of the year and reassess how things are then.”

Based in Hendersonville, Blake Ellege is known for his extraordinarily busy music calendar. In addition to solo performances, the singer leads at least seven bands, each focusing on a specific musical genre. (In November and December, he also makes appearances as Santa Claus.) “The more that I’m involved in music, the happier I am,” he says. Ellege has been full-time in the music business for more than 25 years. He says that pre-pandemic, he “held a day job working 40 hours a week running a personal business and still averaged five to six paid performances a week.” COVID-19-related shutdowns have caused him to lose about one-third of his income.

Shortly after shutdowns began, Ellege organized the Quarantine Concert Series, hosted by Asheville’s Orange Peel. As the pandemic worsened, he suspended that series but hopes to revive it again when conditions improve. Ellege predicts that for bands like the ones he leads, regular concert schedules won’t return until “at least the end of 2021.” Meanwhile, he’s cautiously booking select shows at venues that practice and enforce social distancing protocols.

Christopher Everett is fully immersed in making music as well. A full-time musician since 2006, today he plays guitar in Hustle Souls, a popular Asheville band that plays locally and tours nationally. Noting that live music tends to be seasonal, dropping off during the winter months, he says that prior to widespread shutdowns, he was playing “an average of 20 to 25 shows a month.”

Everett notes that four of those monthly “shows” were—and continue to be—in his role as band director at a local church, and that underscores an important point about professional musicians: the ones most likely to achieve a level of financial security tend to diversify. In and around Western North Carolina, it’s quite common for performing musicians to play in multiple groups, take on last-minute “pick-up gigs,” lend their talents to recording sessions, and even offer private instruction to students.

All of those endeavors figured into Everett’s work mix prior to the pandemic. He says that teaching represented about half of his income, but since COVID-19 hit, he’s lost about half of his students. As a solo artist and with Hustle Souls, Everett has played a number of streaming shows, but like Heath, he notes that the novelty seems to have worn off a bit for audiences. Part of that is due to the nature of a not-in-person performance. “It’s easy to play a similar show to a different audience every night,” he explains, “but when the audience is the same, it gets a little tricky.”

For now, Everett—who has long made a point of remaining debt-free, a good position to be in when a global disaster comes around—stays afloat by focusing on his band director work and teaching. Thanks to technology, he’s able to transition more of his intermediate and advanced guitar students to online instruction. “If anything, long term I think I’ll be in a better [financial] spot when all this is said and done,” he says. “But I worry about all the people in town who are relying 100% on live performing.”