The Coalition’s study found that in Asheville and Buncombe County, more than 3,300 jobs were created or supported by music industry fields, and that “for every one job related to the music industry, another job was supported in the local industry.” The music industry in Western North Carolina as a whole (including recording) represented $171 million—nearly 45%—of the local economy’s $383.4 million in Gross Regional Product.

All of those figures highlight the fact that the region does provide job opportunities for those in music or music-related endeavors. Western North Carolina provides nearly 12% of all music-related jobs in the state, and through 2019 those numbers were on the rise. The concentration of jobs in those fields is more than 7% greater than what would be expected of an average region of its size. That, Reiber says, points to “talent and specialization that distinguishes the region.” Projections for future growth would seem to offer optimism; according to Reiber, “based on the past 15 years of employment history, the [music-related] industry group is projected to further grow over the next five years and to continue to outpace the national rate.”

Still, if one’s primary motivation is high pay and job security, a life in live music is perhaps not the best choice. As defined by the nonprofit advocacy group Just Economics WNC, a living wage is defined as “the minimum amount that a worker must earn to afford his or her basic necessities, without public or private assistance.”According to that organization’s analysis, the living wage rate for Buncombe County (including Asheville) in 2020 is $15.50 per hour ($32,240 annually for a full-time worker), or $14 per hour ($29,120 per year) if an employer provides health insurance. Because the cost of living in and around Asheville is higher than the immediate surrounding areas, the organization pegs the living wage for other WNC counties somewhat lower at $12.60 per hour ($26,208 annually).

It might come as a surprise to many of the hard-working musicians in the region, but according to figures provided by Riverbird Research, the average hourly earnings rate for musicians and singers in WNC is $33.67. That figure is misleading, however, because while musicians spend untold hours practicing, composing, and traveling to and from gigs, those activities are nearly always unpaid. That means that being a performing musician in Western North Carolina rarely works out to 40 hours of paid work per week. As a result, many, if not most, professional musicians in the region make ends meet by adding a day job (sometimes known as a “side hustle”) to their income-generating activities.

For purposes of research, Riverbird Research classifies a number of occupations within what it calls the “live music industry group.” Some of those occupations are somewhat peripheral to the creative endeavor of making music: security guards, material movers, ushers, lobby attendants. Some are concerned with both live and recorded music: audio and video technicians, sound engineering technicians, art directors, managers, and the like.

As such, determining the size and scope of live music as a market force isn’t easy, but Riverbird’s studies indicate that the businesses in that live music industry group account for purchases of $43.4 million in 2019, with more than half of those purchases, 55%, in North Carolina. “There is a true industry cluster and talent supporting live music in WNC,” says Heidi Reiber, “as most supply needed to sustain the representative group of industries is found within the region.”

All of the preceding data should be considered bearing in mind a major caveat: the information is based on numbers through 2019. That means that it does not take into account the economic and societal effects of the 2020 worldwide COVID-19 pandemic.

Local Stages Go Dark
As public health officials struggle to contain or mitigate the spread of the novel coronavirus, many businesses have been forced to shutter. Whether by choice or government decree, nearly all live music venues in Western North Carolina ceased live performances in March 2020; as of this writing, the few that have made tentative steps toward reopening have done so under significant restrictions. From the point of view of performing artists, the pandemic has meant a stop to live shows as well: concert tours have been canceled (or rescheduled for 2021), and even local shows are a rarity. Instead, like a good portion of American society, the region’s musicians have opted to shelter in place, hoping to survive (physically and economically) until the danger passes. 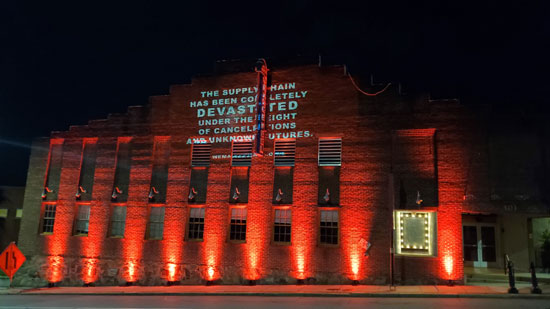 The Asheville music community has seen some high-profile negative fallout associated with the pandemic. In June, Jon and Amanda Hency announced the closure of their popular West Asheville music venue The Mothlight. While they made clear in an official statement that COVID-19 was only a contributing factor in the decision, it certainly hastened the venue’s closure. “The Mothlight is a small piece of a very large and important puzzle,” the Hencys wrote. “Venues all over the world are facing this same struggle.”

Organizers of local festivals faced difficult decisions as well. Begun in 1988, Asheville’s Downtown After 5 is an extremely popular free, outdoor concert summer series; attendance at the shows averages around 5,000 people, with some shows drawing more than 8,000. Asheville Downtown Association executive director Meghan Rogers says that each event generates between $10,000 and $12,000 in net income. The not-for-profit ADA uses those funds for member benefits and programs as well as advocacy. 2019 was a very successful year for Downtown After 5, generating above-average revenues, and plans were well underway for the 2020 season when the pandemic reached the critical stage. Because of health and safety considerations, the 2020 season wouldn’t unfold as intended. Rogers estimates that “based on 2019 numbers, we will experience a net loss of about $70,000.” That figure doesn’t include losses from the ADA’s other events or other COVID-19 related general losses.

In recent years, the high-profile LEAF Festivals have drawn 12,000 people to the lush, green outdoor environs of Lake Eden just east of Asheville. In 2015 LEAF Global Arts added another signature event, the free LEAF Downtown festival, and according to executive director Jennifer Pickering, that event draws some 30,000 people. Both LEAF and LEAF Downtown feature a number of local and regional performers. The pandemic forced a rethink of those festivals, but that wasn’t the only hit facing LEAF: “We had just opened LEAF Global downtown,” Pickering notes. That music, arts, and culture venue employed 12 people, and it was forced to close as soon as it opened. “We had to immediately lay everyone off on the Global team, and then we gave everybody on the year-round staff team the choice to either go on furlough or to have a salary reduction,” she says.

But the creativity of venue owners, event organizers, and the musicians themselves meant that even a worldwide health crisis couldn’t put a stop to the music; organizations and individuals quickly set about pivoting to face the new reality, developing and implementing plans to survive the pandemic.