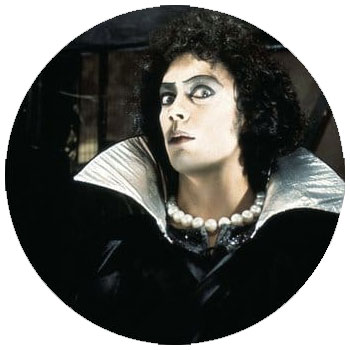 Even though today I’m (cough, cough) middle-aged, when The Rocky Horror Picture Show first came out, I was too young to appreciate it. In fact, as an 11-year-old, I was too young to have appreciated it, even if my parents had allowed me exposure to the film (and they would not have done). But its influence upon pop culture was so pervasive, that I learned about it in a number of once-removed fashions.

First of all, when Meat Loaf scored big with the Todd Rundgren-produced over-the-top Bat out of Hell LP in 1977, most every feature or review discussed his earlier role in RHPS. And in 1979 when Rock ‘n’ Roll High School hit theatres, Ramones (AND P.J. Soles) fans adopted the Rocky Horror practice of dressing up, shouting out dialogue and aping the onscreen action right there in the darkened cinemas. I was a big RnRHS fan, and when I got into all that, fans of Rocky Horror quickly set me right about the true origins of what seemed to me a most original and unusual way of dealing with a movie.

But as far as the music from Rocky Horror, it only seeped slowly into my consciousness over the coming years. Which is just as well; the showy, campy character of the music would have been lost on a younger me. Today I’m old enough to appreciate it for the masterwork that it is. In fact, for a number of years in the mid 2010s, I was keyboardist and sometime lead vocalist in a glam-rock cover band called The Glampas (get it?). And we covered “Time Warp” to great success.

Yet somehow the Rocky Horror Picture Show soundtrack LP never found its way into my collection. Until now, that is. In celebration of the 45th(!) anniversary of its release, Ode Records/The Orchard has reissued the album. But it’s not a straight (double entendre intended, heh) reissue: The cover and credits are gone, but instead of yer plain ol’ black vinyl record comes a vivid picture disc. Remember those? Well, they’ve come a long way from the days when buying a pic disc meant you got a cool color image and a crappy audio document. This record sounds sublime. 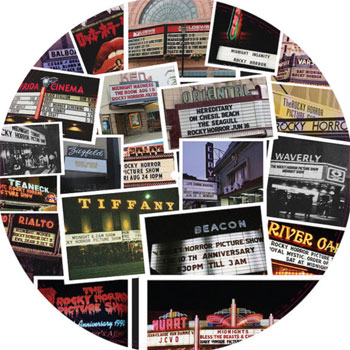 And the music! Beautifully arranged (and often orchestrated), ht features top-flight musicians like B.J. Cole and Mick Grabham (Procol Harum) and John “Rabbit” Bundrick (The Who). And of course they’re merely the players. The vocalists include the aforementioned Mr. Loaf, the inimitable Tim Curry and better-than-one-might-expect vocals from Susan Sarandon and Barry Bostwick.

Far too many soundtrack albums – especially thematic ones in which the music is part of the actual story – simply don’t hold up as listening experiences. Rocky Horror Picture Show is very different: it’s successful as a purely audio experience, wholly separate from the motion picture. There are bits of dialogue here and there on the LP, but they’re kept to a minimum. The result is an album that flows from start to finish.

Heck, even if you’re not a fan of the movie, the album remains essential; it perfectly encapsulates the sort of National Lampoon vibe of the far-too-maligned 1970s. It’s as much a part of our shared cultural experience as, say, the early years of Saturday Night Live and those Firesign Theatre albums that only made (a sort of) sense if one was stoned off his or her gourd. But as outré as its subject matter was for that era, Rocky Horror Picture Show is perhaps more accessible than either of those touchstones, and it’s arguably worn better over the four-plus decades that have followed.