Chocolate Samurai: More from My Conversation with Fantastic Negrito (Part One) 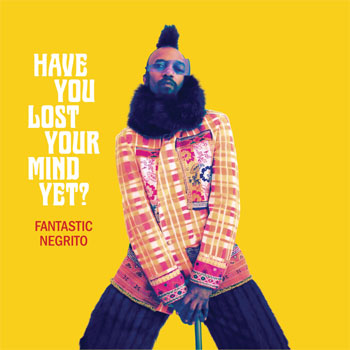 Thanks to my friend and former bandmate Jeff Japp, I discovered the music of Fantastic Negrito right around the time he released his stunning – and eventually Grammy-winning – debut, The Last Days of Oakland. I’ve also been lucky enough to see him live onstage no less than three times, and I’ve had at least four interviews – including one in person – with him over the last several years.

His releases are always compelling; it’s a well-worn cliché to say that a given artist “transcends genre,” but there’s no other way to describe Fantastic Negrito. Nominally a blues artist, he makes music that (as I wrote in a recent feature for SF Weekly) is blues but almost never sounds like blues. There’s plenty of rock, soul, funk, hip hop and what-have-you to be found in his music.

His third album, Have You Lost Your Mind Yet? was released in August. As I expected – he’s never less than a superb interview subject – our September conversation yielded more good content than the SF Weekly story could hold. So herewith is an edited transcript of the best parts of what went unused.

What were some of the major issues that informed the music you wrote for the new album?

First of all, Have You Lost Your Mind Yet’s content is really based on mental health. Mental illness, mental wealth. Like, how are we existing, coexisting? I feel like there is a blooming mental health crisis in this country. There’s access to all these events whether it’s tragic, divisive, whatever they are, we can even overdose every day. And where it’s specific to America it the level of violence. I would say, number one, the level of gun violence which we kind of accepted like Starbucks. Eight people will go into a place and shoot everybody. “I’ll have a tall latte” shit, you know what I mean? It’s in the same lexicon.

And I just took all these topics – and now Covid-19 – this virus that reveals how sick we really were, how much we are in need of therapy. My therapy is [music]. Every song that I wrote I targeted this person, that person. It’s the hardest album I’ve ever made, because I think I’m on a more micro level. I felt like we can really be responsible for the stuff that happens on a micro level.

Having addressed topical issues on your past albums – and again now in a micro fashion – do you feel that you have a responsibility to keep doing that?

I have a responsibility as a living, breathing human being on this planet. Especially being a middle aged guy, I’ve accumulated some wisdom. And I think this is why we live. Why do we wake up every day? We wake up every day to take care of those behind us. And take care of people who are less fortunate, to people who don’t have all the opportunities, our children, our neighbors’ children, our nephews and nieces. I think that’s why we exist. So, absolutely, abso-fucking-lutely actually, yes. Yes, and double-triple yes, I have a responsibility. And I’m very pleased to have this responsibility, as imperfect as I am.

Your core group of musicians has remained consistent among all three albums. When you’re writing, would you say you subconsciously have their skills, abilities and styles in mind?

Absolutely not. When I’m doing the [basic tracks for an] album, I don’t let anybody in the room. I write, I play it; it’s very cathartic, man. I play every bass note, every keyboard, guitar licks. [The other musicians come in later and add or replace parts.] Songs like “How Long?” I kept a lot of my guitar as well; it just felt like it needed to be as funky as it wants to be. With this album I definitely was in a funkier mood than the last album … which is okay. You know, it’s like whatever the mood is.
So then later I bring everybody in and they scratch their heads: “What have you got?” That’s kind of how it goes. They’re like, “Oh, you have a Hammond B3 this time? No more apps and plugins.” Yeah, I’ve got the actually B3 that Tony! Toni! Toné used on all their records.

Masa Kohama plays some fairly extended lead guitar parts, which is a little different than the last couple of albums.

I want to be different every album. I invited rappers in on “Searching for Captain Save a Hoe.” And my [fellow] NPR [Tiny Desk Contest] winner [Tank] on “I’m So Happy I Cry.” So I did open up the album more. And that guitar solo on “Your Sex is Overrated” was one take; it was very human. We were all sitting in the room, I’m playing keys and I’m like, “This is it; nothing else needs to be said.” We did it awhile ago, actually; I had buried it, and I brought it back to life.

When you’re writing, how much thought, if any, do you give to how a track will go over live?
Zero. I couldn’t care less. Yeah, zero. I don’t care about that, man. I just care about when you’re in the studio it’s a sacred, special place and you can feel the vibrations of what’s happening in that studio which is definitely what’s very important and very powerful and it can go wrong quick. When we’re in that studio, no one’s allowed in. No faults can get in; none of that. You’re not a Grammy winner; none of that. You’re in there and you’re a human being fighting for your life. And I put zero thought into that because they’re two separate, different things. Because it’s not a performance in the studio, I don’t believe. You know, I think it’s like a sacred ritual. I’m in there now [doing something]. You get your self and your spirit to connect with these vibrations from all this music that was laid down before us.