Adi the Monk: The ‘Cosmic Thread” Running Though His Music

Asheville’s music community features an impressive number of unique personalities. But it’s safe to say that only one has a personal history that includes a period spent as a Vaishnava monk. Ādi Puruṣa Das performs and records as Adi the Monk, making instrumental music that – on the surface at least – has little to do with his devotional practices. But as showcased on Soul of the Earth, his fourth and latest release, his jazz/funk/blues instrumentals are informed by his time in Nepal and India. He will celebrate the album’s release with a socially-distanced August 29 lawn concert at Isis Music Hall.

On his earlier releases, Adi played all of the instruments. And many of his live performances around Asheville – whether at venues or on downtown sidewalks – were solo affairs as well. Soul of the Earth was made using a similar approach, but it was created with the idea that the songs would be played live by a trio. “I’ve just been waiting for an opportunity, really, to put the Himalaya Soul Trio together and to start a group of my own,” he says.

The trio format – featuring bassist Jhon Bellizia and drummer Perry Lavin – brings an energy to the music that builds upon the approach of Adi’s previous releases, including his full-length, self-title debut album from 2018. He says that having a band makes the music “more dynamic, because you have the elements of the personalities and tastes of all of the members all mixed together on the palette.”

Adi says that for him, playing alone is a sort of prayer or meditation: “It’s a lot like talking to yourself.”

He characterizes the experience of leading a trio as “more like being in a conversation. There are so many more elements every time you add a new musician.”

Even though he name-checks Miles Davis and Jimi Hendrix among his favorite artists, neither those influences nor many others manifest themselves in an overt way in his original music. “I wouldn’t say that I’ve put a whole lot of time into imbibing or trying to mimic any particular artist’s style,” he says. He does acknowledge that both jazz great Wes Montgomery and Howlin’ Wolf sideman Hubert Sumlin have influenced his approach on the guitar. 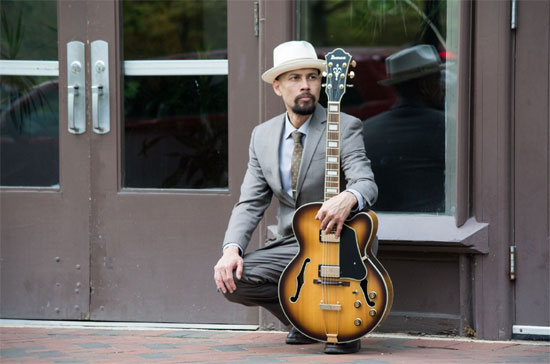 Echoes of Montgomery’s guitar tone show up across Soul of the Earth’s eight tracks. But Adi prefers to chart his own musical path. “What’s really important [to me] is to be able to express myself through the music,” he says. “So, I’ve really never been one too much for trying to imitate another sound. My thing is making my own music and just enjoying whatever comes out naturally.”

The song titles on the new album suggest a contemplative mindset: “The Cosmic Thread,” “Way of the Ancients” and “The Art of Letting Go” are representative examples. But Adi isn’t explicitly conveying philosophy within the compositions. “I generally name the songs generally after they’re written, and I usually pick the name based on the type of feeling or sentiment or thought that it awakens within me,” he admits. “I certainly don’t expect it to have the same effect on everyone.”

Even so, Adi’s background as a monk does color the music he makes. “My motivation for doing anything is affected by my spiritual path, and the time that I spent pursuing deeper understanding of that spiritual nature,” he says. “The way that I do what I do, the reasons why I play music, my expectations from playing music, and my drive behind playing music: those are all directly influenced by my spirituality, which is still very much a part of my everyday life. My spiritual practice is not something that I left behind in the temple many years ago.”