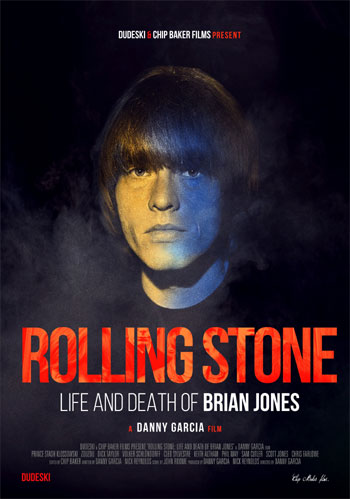 Sometimes I cringe a bit when learning that there’s been made a new film purporting to explore a notorious scandal or controversy of the past. There’s a very high likelihood that the story has been played out as far as it can go absent new information, and a nearly as great chance that the film is little more than an exercise in exploitation (of both the subject and fans who would eat up any morsel of tangentially relevant information).

That’s the baggage I was carrying when I learned about Rolling Stone: Life and Death of Brian Jones. As it happened, I was able to evaluate review copies of both the film and its companion soundtrack LP. I dealt with the record first; that review is here.

As much as I enjoyed the record, listening to it didn’t exactly assuage my potential concerns about the film. The music was all over the place, and the inclusion of some ersatz “Stonesy” music moved the needle on my uh-oh meter. Still, I did my best to approach the DVD with as much of an open mind as possible.

I’m happy to say that was a good idea. Rolling Stone is not designed – and does not function – as a tool for exploitation. It’s a well-crafted documentary (sans narration, as is the seeming custom these days) that replies largely on the recollections of people close to the late Rolling Stones guitarist and founding member. Not surprisingly, it also draws upon the perspective of authors who have written books on the subject.

A film strictly about the controversies surrounding Jones’ 1969 “death by misadventure” – those British expressions are droll, aren’t they? – wouldn’t fill up a segment of the old Unsolved Mysteries television program, so the filmmaker wisely places the story into a biography of Jones’ life and musical career. Though his childhood was emotionally fraught, he grew up in relative comfort, as evidenced by the surprising number of (silent) home movies that exist. Those are fleshed out by the accompanying recollections of friends (okay, friends might be too strong a word, as Jones’ somewhat dissolute and self-centered personality was too problematic to cultivate such relationships).

A kind of pop-psychological portrait of Brian Jones emerges in the film’s first half, one that might seem to foreshadow his death at (or perhaps only near) the bottom of a swimming pool. His time with the Rolling Stones is covered as well as can be expected in a film that uses not a note of actual Rolling Stones music. Happily, some superb stock of the Jean Luc Godard film Sympathy for the Devil provides some of the most intriguing visuals in the film, but potential viewers should be advised that the accompanying audio from Godard’s movie is not included.

I was also pleased to see discussions – however brief – of the Pipes of Pan at Joujouka and A Degree of Murder, two projects with which Jones was involved (to the degree he was able at that stage). They’re placed in the context of his worsening physical and psychological states, and against the backdrop of a pair of drug busts, at least one of which seems dodgy.

Once the film gets around to the matter of Jones’ demise, it draws from conflicting accounts, eventually leaving the viewer to decide what happened. Did he simply drown while having a late night swim after ingesting too much drugs and alcohol? That seems exceedingly unlikely. At the other end of the conjecture spectrum, was he the victim of a contract murder, a hit put out on him by Mick and Keith? Even more preposterous, and those interviewed for the film emphasize that point. (Allen Klein – no sweetheart he – didn’t order the supposed hit, either.)

In the end, as it so often the case in mysteries set in the bucolic English countryside, it’s nearly a case of “the butler did it.” In this case, however, the most likely suspect is a renovation contractor whom Jones had finally – belatedly, it would seem – dismissed. And the circumstances suggest some degree of manslaughter – a fight – rather than any kind of premeditated act.

The whole thing, it seems, could potentially be cleared up if the presiding constabulary would allow access to the case files. There seem to be any number of suspicious turns in the case, most of which have a strong whiff of post-crime cover-up of the “nothing to see here, move along” variety. As to who might be behind the alleged cover up, there’s a long list of potential suspects to consider, including names you’d recognize as well as the police themselves.

But apparently said files are locked under what’s known in the United Kingdom as a “75 Year Rule.” That means that – since Jones perished more than 50 years ago, we’re unlikely to learn anything of significance for another quarter century, by which time anyone with any kind of culpability in the matter will have shuffled off their own mortal coil.

In the meantime, however, a viewing of Rolling Stone: Life and Death of Brian Jones provides fodder for further discussion for those so inclined.