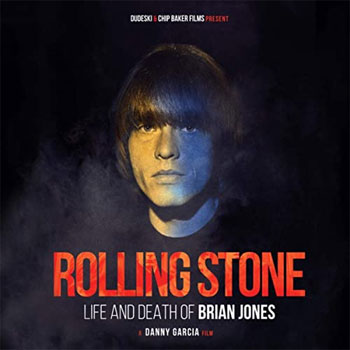 There are at least three categories of film soundtrack albums. One is a collection of songs, scores, cues and the like, often by a single composer/artist, music created expressly for a film or television show. Another is what my esteemed colleague Derrick Bang (author of the new two-volume book series on Crime and Spy Jazz) calls “jukebox soundtracks.” Those are merely a collection of songs, chosen seemingly at random (or with an eye toward the budget and/or potential ancillary profits). The third fits in between: a collection of songs by various artists that fit somehow, some way, with the tone, scope, message or perspective of the film.

It’s that third category into which Rolling Stone: Life and Death of Brian Jones seems to fit. Not a collection of recordings by the Rolling Stones nor the Pipes of Pan at Joujouka, and not a collection of various-artists covers of that material, instead it’s an album of songs by artists fitting into a kind of psych-revival bag. Considered in that light – as having no particular relevance to the film for which it’s named – it’s a solid set.

The Proper Ornaments open the set with the somnambulant “1969” (not the Stooges song). It sounds quite a bit like the sort of thing Brian Jonestown Massacre might do, so there’s a (tenuous) connection. On “Ain’t Nothing Here to Change My Mind,” Greg Prevost of The Chesterfield Kings does a fine imitation of The Chocolate Watchband’s Dave Aguilar … okay, I’m kidding, but just a bit. He sings in a Jaggeresque manner while the band plods along in a kind of early’ 70s junkie-era Stones manner.

Dick Taylor, of course, has an actual connection to the Rolling Stones. The Pretty Things guitarist handled bass guitar duties in the early Rolling Stones before Bill Wyman came on board. With a group he calls The Red Squirls, he turns in a Stonesy instroblues on “Edith Grove,” and returns later on the LP with “14A Chestnut Street.”

Former Thee Hypnotics guitarist Ray “Sonic” Hanson and his Whores of Babylon contribute a nearly static blues with “Dusted.” The slide guitar is nice enough, but the tune itself is flat on its back. Much more successful is “Riding the Dog,” a track by the Deadbeat Poets featuring Frank Secich of underrated ‘70s midwest power pop legends Blue Ash. Yes, it’s basically the 3,000th rewrite of “I’m a Man,” but it’s energetic and fun.

Spanish multi-instrumentalist J.M. Baule – already known for his many previous tributes to both Brian Jones, the Rolling Stones in general and even Bob Dylan – creates an instrumental that evokes Satanic Majesties-era Stones on the sitarfest “The Path of the Meeting.” British rockabilly Steve Hooker contributes a thin rewrite of “Jumpin’ Jack Flash” with “Tighten it Rough.”

Sounding a bit like Bert Jansch crossed with Jimmy Page, one John Perry (about whom I can find little) is represented well by an instrumental he calls “Brian.” And though they’re known as an electronica band, British group Alabama 3 sounds like ZZ Top on “(I’ll Never Be) Satisfied.” The title might be meant to suggest “(I Can’t Get No) Satisfaction” but the tune does no such thing. Nor does it contain any discernible Stonesy sonic elements. Its greatest virtue its its brevity.

Winning the award for longest title on the LP, The Bermondsey Joyriders turn in a tune called “Brian Jones (The Real True Leader of the Rolling Stones).” They sound a bit like New York Dolls, but the lyrics might be a bit too on-the-nose for some listeners. New York City outfit The Primadonna Reeds aim for a sound and feel halfway between Television Personalities and early Robyn Hitchcock on “Glitter Girl.” It might not have any particular relevance to Brian Jones, but it rocks, and may well be the catchiest thing on the entire soundtrack LP.

The album concludes with a symphonic/orchestral track called “Muddy Waters.” Even in the removed-from-context album, it seems out of place, a classical-leaning instrumental designed for the later half of end credits, one supposes. It’s lovely, though, and perhaps unexpected from an artist (John Roome) more often associated with hip-hop, breakbeat and collaborations with The Orb.

Though it’s inescapably a strange, near grab-bag collection, Rolling Stone: Life and Death of Brian Jones is an enjoyable listen.