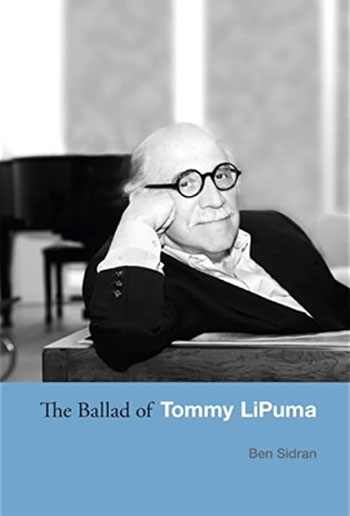 One might think that an insider tale such as the biography of a record producer wouldn’t have wide appeal. That thinking goes that unless that producer is one of the most famous – say, Phil Spector or just maybe Sir George Martin – the story would be too centered around the technical details of how an album is made.

I had a similar concern when I received an advance review copy of The Ballad of Tommy LiPuma by Ben Sidran. Not sure what to make of it, I opened to a random page and read a bit. The page upon which I landed was a brief tale about LiPuma and an associate going to Vegas on a whim, dropping windowpane LSD and witnessing a woman in a strapless gown riding a fish and playing “Smoke Gets in Your Eyes” on a harp. No, really.

I knew then and there that I would be reading the whole thing.

That vignette was no outlier; Sidran’s book does not disappoint. The author – who’s also an acclaimed jazz pianist – is a masterful storyteller. And it helps that he has great material from which to draw. LiPuma’s life is a kind of Horatio Alger tale: his Italian roots, his youth in Cleveland, his bucking of convention to follow his own path. Yes, you’ve read biographies with a similar arc. But few are as lively and entertaining as this.

LiPuma’s sparkling wit shines through the entire book; Sidran quotes him extensively. And not to ruin anything with a spoiler, but LiPuma passed away in 2017, so it’s fair to assume that Sidran drew quotes from his many years of friendship with his subject.

The book does get a bit into LiPuma’s philosophy of production, but – this time I won’t spoil anything – the description (and LiPuma’s method itself) lends itself to understanding and appreciation by anyone, music insider or not.

The Ballad of Tommy LiPuma is a funny book, but it’s also warm-hearted, the product of an author who knew and clearly valued the friendship of the subject. It’s also admirable in its candor and forthrightness. And it’s so well-written, so full of memorable passages, that I lost count how many times I interrupted my dear wife – busy reading a book as well – to quote extensively from Sidran’s pages. As an indicator of just how much I enjoyed the book, I cannot think of a higher kind of praise.

The woman with the harp is merely one of a seemingly endless parade of characters that features in The Ballad of Tommy LiPuma. But at its core, the book is about LiPuma’s skill at working with difficult people, and at navigating his way through daunting circumstances with style, class and – most of all – wit. Recommended.