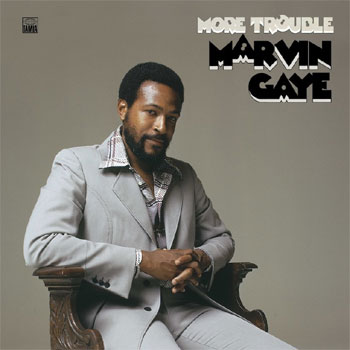 I’ve read critical essays that characterize Marvin Gaye’s Trouble Man as part of a triptych of albums, one of three soundtrack albums for ‘70s “blaxpliotation” films. Yet against the backdrop of Isaac Hayes’ Shaft and Curtis Mayfield’s Super Fly, Gaye’s 1972 album is little known and less remembered. Part of the reason for that may be that while Shaft and Super Fly were both box office smashes, Trouble Man (the film) fared poorly both critically and commercially. And unlike the singles from those soundtrack LPs for those movies, Gaye’s “Main Theme from Trouble Man” – though a hit – somehow didn’t pass into sustained pop culture.

But coming as it did on the heels of What’s Going On, Marvin Gaye’s soundtrack album did indeed sell well, faring nearly as well as Gaye’s acknowledge opus. The album represented one of few opportunities he would have as an artist to exercise a great measure of creative control upon his work. Critics – including Andrew Flory, author of I Hear a Symphony: Motown and Crossover R&B – have remarked upon Trouble Man as a tantalizing hint of what Gaye might have been able to do had that latitude been at his disposal for other subsequent projects.

Listing to Trouble Man, it’s notable just how sparingly Gaye uses well-worn tropes of the era – wah-wah guitars, congas, bongo drums and the like – in his arrangements. Those elements are in evidence, to be sure, but he employs them as part of a much wider and more textured palette of sonic elements. Orchestration and layered vocal work play a far more prominent role in the Trouble Man’s suite of thirteen (mostly instrumental) songs.

With that in mind, an album of outtakes from the Trouble Man sessions would be worthwhile, if only as a means of providing a window into Marvin Gaye’s creative process. Happily, when the album received an expanded 2CD reissue in 2012, a passel of previously-unheard material was featured as the first (not second!) disc.

Now, eight years later – and 48 years after the original album’s release – those “bonus” tracks have re-appeared as a standalone album of their own – on vinyl, no less – titled More Trouble. And the tracks on this new release do indeed allow listeners a glimpse into Gaye’s process of constructing the soundtrack.

Considered purely on its own merits, More Trouble wold be a minor entry in Gaye’s catalog. But of course it was never intended for release in such a manner, so to consider it by that measure is unfair and less than useful. Think of it instead as a companion to the original Trouble Man, and its qualities are more reasonably appreciated.

As it happens, Flory not only co-produced the new More Trouble release, he wrote its enlightening liner note essay. That essay places the material into its historical context, and specifically into the timeline of Gaye’s work. He significantly notes that while Gaye has “a full orchestra and the run of the recording facilities, he nonetheless “never really had the chance to finish [Trouble Man] the way he wanted.” That may well have been the case, but listening to both the band and orchestral-focused tracks, the quality of the More Trouble outtakes do underscore just how successful he was.

More Trouble comes packaged in an attractive gatefold sleeve, and while the album doesn’t include the kind of detailed session notes for which deep-dive listeners might wish, that information is widely available elsewhere. More Trouble is highly recommended, with the caveat that you’d do yourself a disservice to not also have a copy of the original Trouble Man as well.