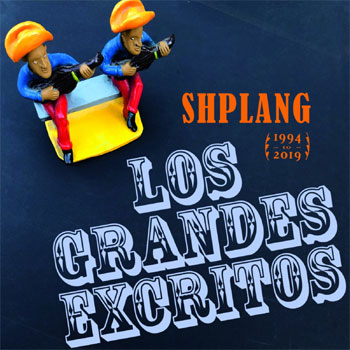 It’s always a bit of a head-scratcher when a band I’ve never heard of releases a best-of set. But then I remember that – try as I might – for every great artist I discover, there are likely dozens or more that escaped my notice. With that in mind, I popped Los Grandes Excritos into my CD player. And then I discovered the wonder that is — and has for many years been – Shplang.

Humorous, tuneful, unassuming, catchy, chiming, memorable. Those are the adjectives that immediately come to mind as this CD spins. This collection draws from four of the band’s previously released albums, dating from the middle 1990s to around 2000. A 2009 album, My Big Three Wheeler, seems not to have been sourced, but the set also features three previously-unreleased (and undated) tracks.

The music is on the quirky side, showing a lyrical approach not too far from that of They Might be Giants. Shplang shares with the two Johns a focus upon well-crafted songs, done in a dazzling variety of styles. But the whimsy is balanced with a knowing sense of rock/pop values. The arrangements are simple but never homespun.

Highlights are many. “Spanish Galleons” and “I Don’t Know Love” are standouts, but the 14 tracks on Los Grandes Excritos are admirably consistent in quality. “Delacroix” is resolutely strange, Serge Gainsbourg meets Papas Fritas. Or something. The winning vocal harmonies are perhaps the music’s strongest defining characteristic, but there’s much to like. This set serves well its stated dual purpose of introducing the band to an audience who (like me) missed them the first time ‘round, and whets appetites for promised new music to come.