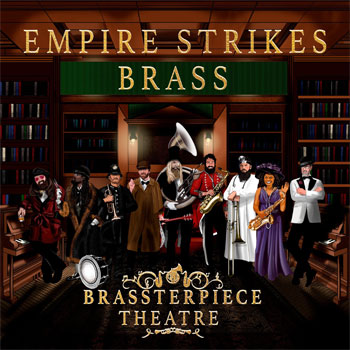 Some creative projects are the result of a carefully thought-out plan. Others happen through a special combination of good fortune and the participants’ openness to whatever develops. The latter is the case for Asheville’s Empire Strikes Brass. The group came together in 2012 for what was planned as a one-off event. Founder and saxophonist Paul Juhl assembled a musical collective of top local talent to play music ina New Orleans second line style.

Things went better than expect, and Empire Strikes Brass became a proper group. But the band developed its own sound and character, one that added funk and soul while hanging onto its N’awlins flavor. The band’s 2017 debut, Theme for a Celebration, was a varied and exuberant release that captured ESB’s energy and showcased the instrumental prowess and knowing musical interplay of its eight members.

The group quickly established itself an in-demand live act; in between the members’ many other musical commitments, Empire Strikes Brass toured, adding a hometown show into its schedule whenever possible.

Almost three years would pass before the release of a second studio album from the powerhouse octet, but for those who delighted in Empire Strikes Brass’ distinctive musical approach, the wait was worth it. In November, Brassterpiece Theatre was released.

A quick read of the ten titles on ESB’s latest makes clear that there’s a playful, partying mindset at work within the group; how else to explain titles like “Sneak the Freak” and Mr. Fatty McNasty (Lemme Get a Drag).” The second-line horn work of the ensemble is backed up by a deeply funky rhythm section. Rubbery analog synthesizers (from Lenny Pettinelli and Sean Donnelly), Nik Hope’s loose-yet-somehow-tight drumming and a rock solid bass foundation (courtesy of JP Furnas) are trademarks of songs like the opener, “Pile ’em Up.”

Part of Empire Strikes Brass’ creative success lies within its size: eight players – several of whom sing – means that the band can tackle complex yet resolutely accessible arrangements. The band’s sound has echoes of Mother’s Finest and (more obviously) Sly and the Family Stone, but the crack horn section allows the band to lay down an atmospheric (and at times cinematic) ambiance. The opening strains of “Mr. Fatty McNasty” hint at a soundtrack direction, but the group quickly takes a left turns into a Bourbon Street meets uptown funk vibe.

The gospel-flavored soul of “Circle” features plenty of those horns, along with a tasty electric guitar solo from Kelly Hannah. And Hope’s drumming on “Tongue” leans in a trip-hop direction, while the other players lay down a soul jazz vibe that suggests British acts like the James Taylor Quartet (not that James Taylor) or DC Fontana. On paper, the two styles might not seem to mesh, but in the capable hands of ESB, they do.

Even though the band features several strong vocalists, Empire Strikes Brass remains a primarily instrumental group. The carefully layered arrangement of tracks like “Allz Em” shows that the players are serious about presenting a finely textured body of music, yet the head-nodding “Poundin’ the Pavement” shows that ESB places equal focus on crafting streetwise music that’s right for dancing. Brassterpiece Theatre is a fully realized effort that demonstrates the facility of this powerful musical outfit.