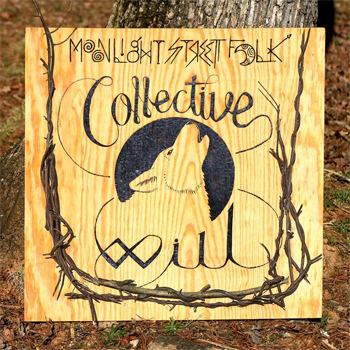 There’s no shortage of acoustic-based, folky bands in Western North Carolina. Standing out from the crowd is thus more of a challenge than it would be for musicians operating in another musical idiom. But Moonlight Street Folk have developed a distinctive sound that sets them apart. The Asheville quintet’s debut album, Collective Will, features seven songs built on a solid foundation.

“Light and Darkness” opens the album and establishes the Moonlight Street Folk approach. Seemingly effortless, laid-back vocal harmonies (led by Amalia Grannis) are supported by Haley Swift’s insistent – but never jammy or noodly – mandolin. The song itself rarely ventures beyond a two-chord vamp, but the group understands that a good song has less to do with how many chords it has, and more – everything, really – do to with how they’re used. The song is hypnotic in a way that suggests an unplugged arrangement of Neil Young and Crazy Horse’s “Down by the River” (or, if you prefer, Pink Floyd’s “Breathe”). The rhythm section distinguishes itself by hitting a perfect balance: the playing feels loose, but it’s supremely tight.

The tail end of “Light – Darkness” reveals some piano that had been buried in the mix. As “Gaze of the Toad” opens, that piano shows up again, but it’s soon subsumed by a beefy bass guitar line from Charlie Sprayberry, identified within the band only as “Mr. Charlie.” There’s a kind of gospel-chorus feel to the song, with chirpy vocals out front, contrasted with percussionist/keyboardist Ariel Joseph’s deep and soulful vocals that initially serve as a response. But as the tune develops, his lead vocal takes over. Halfway in, the tune becomes a chant, with a strong folky campfire vibe. There’s a vaguely sinister air at work. Nick Marino’s splashy drum work pushes the song forward. There may only be five people in Moonlight Street Folk, but together they sound far larger and more formidable.

“Still We Rise” opens to the sound of crashing waves; the precisely picked mandolin, the lilting 3/4-time and minor-key chanting combine to create a distinctly Celtic feel. The vocal harmonies are deeply textured. The song’s second half pushes the instrumentation farther into the background; as the song concludes, a chorus vocal break does away completely with instruments; the effect is sublimely spine-tingling.

“No Stressin’” opens with what sounds like a modern take on Gregorian chant, joined by a crystalline piano figure. Next, Swift’s mandolin takes the spotlight, and the arrangement takes its time before the vocals begin. Though the song is miles away from reggae, it creates a feel-good ambiance that has much in common with the best music in that style. The electric bass serves as a splendid counterpoint to the acoustic instruments (piano and the ubiquitous mandolin). In the end, “No Stressin’” – like all of the tunes on Collective Will – is acoustic in nature but acoustic/electric in execution. A simple yet lovely piano solo exists at the center of the song.

“Dim Little Head” is the album’s musical outlier. With a spirited lead vocal, sharply-attacked mandolin and an aggressive bass line, the song leans in a rock direction. But – and this is a testament to the group’s well-honed musical vision – “Dim Little Head” still works within the context of Moonlight Street Folk’s approach.

“Call My Bluff” dials down the energy in favor of an arrangement that places the focus back on the most prominent of the band’s many assets: vocals and mandolin. Persistent as the latter is, it’s never once in danger of overstaying its welcome.

The record wraps up with the self-referential “Brother Ant.” The song opens with a lively dialogue between piano and mandolin, but quickly shifts gears into a stomping, good-timing tune with a jug band feel. If the Mamas and the Papas had been shorn of their studio sheen (and not supported by the “Wrecking Crew”), they may well have sounded like this.

There’s a quiet confidence in everything about this record. The musicians sound as if they’ve developed a preternatural level of unspoken communication, and they apply that to their music. The playing is resolutely in an ensemble fashion; nobody’s competing with anyone else, and every sound is employed in service of the ultimate collective goal. Flawlessly written, sung, played, arranged and produced, Collective Will is an exemplar of nominally acoustic folk-pop.