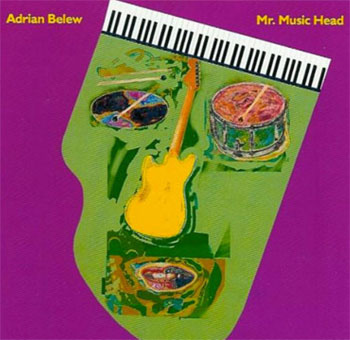 By 1989, Adrian Belew was well into the high-profile phase of his career, one that continues to present day. The guitarist’s star had been in ascension since being discovered by Frank Zappa and added to his band, subsequently joining David Bowie’s band, and going on to work as a sideman for Tom Tom Club and Talking Heads.

Scoring a solo record deal, Belew released Lone Rhino in 1982. He spent the next three years in King Crimson, but still managed to release 1983’s Twang Bar King and an instrumental set called Desire Caught by the Tail in 1986. His pop-leaning group the Bears was active touring and recording during that period as well, though it fell apart in the face of poor support from its label.

But it was in 1989 that Belew finally focused squarely upon his solo work. The product of that focus was Mr. Music Head, a solo album in both name and character. The well-regarded collection traverses genres and includes Belew’s trademark quirkiness both in his instrumental approach and lyrics.

The most well-known cut on Mr. Music Head is the opener, “Oh Daddy.” With squalls of bent-note guitar, the tune presents a humorous dialogue between the guitarist and his young daughter. Equal parts weirdness and pop melody, it distills the guitarist’s multifarious talents into the space of three minutes.

The other tunes on the album are a varied, high quality if deliberately oddball lot. “House of Cards” makes use of found sounds, initially betraying the influence of Bowie and Eno. But it eventually unfolds into yet another pop raver. The Beatlesque “One of Those Days” is bouncy and benefits from some great backing vocals (like nearly everything on the album, created by Belew himself).

The clattering “Coconuts” features layers of sizzling guitars and an infectious beat. “Bad Days” is built on a lively piano figure, and features what sounds like backward guitar (with Belew, you can never tell). “Peaceable Kingdom” sounds like a pop rethink of the Brian Eno/David Byrne collaboration My Life in the Bush of Ghosts.

Is that a recording of an animal that opens “Hot Zoo,” or is it Belew’s treated guitar? The answer likely lies somewhere in between. The deeply layered, atmospheric tune is vaguely reminiscent of Paul McCartney’s “Nineteen Hundred and Eighty Five,” though the similarity doesn’t run deep; Belew’s song is far more idiosyncratic.

Belew’s expansive understanding of music is explained in part by his facility on drums; the beats on Mr. Music Head often sound electronically created and/or treated, but they exhibit a complexity that borders on polyrhythm; that’s a characteristic not often found within the confines of pop. “Motor Bungalow” is an exemplar of his skill with beats, but the corkscrew guitar lines are worthy of admiration as well.

“Bumpity Bump” has all of that and more; Belew is one of the few artists who’s as comfortable in a progressive context as he is making danceable tracks like this one. “Bird in a Box” has many of the same qualities – and some nifty vocal harmonies as well – but it’s a bit less accessible, thanks in part to a weird and squealing (yet technically superb) lead guitar part.

“With a title like “1967,” one might expect a baroque pop affair. This song features finger snaps and twangy acoustic guitar, and it gets more complex (read: weird) as it unfolds. “1967” is equal parts country blues and psychedelically meandering excursion. Mid-song, the baroque arrangement makes an appearance, with bowed bass (by Mike Barnett, the only musician other than daughter Audie to join Belew on the LP). The song ends abruptly, to the sound of Belew announcing, “I gotta go now.”