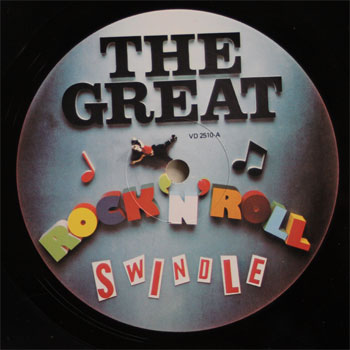 The same is true—even more so—when the Sex Pistols attack “Stepping Stone.” Jones changes the chords around, and Lydon flails as is his wont, but here he seems to know all of the words. The cavernous production aesthetic isn’t really needed, but the tracks works on all levels. The other band members help out on the “Aye-yi-yi-iy-iy” vocal refrain. Jones overdubs a “solo” of sorts that’s really just a squall of feedback, but it fits nicely in this context.

Another gratuitous track follows: French street musicians performing a gypsy-flavored “Anarchiè pour le U.K.” As a joke, it works, but three and half minutes of “Anarchiè” is at least three too many.

Continuing on the foreign-language theme, the next track is titled “Einmal war Belsen Vortrefflich.” In English, that’s “Belsen Was a Gas,” one of the Sex Pistols’ most off-color numbers. Featuring Sid Vicious on bass, the live recording dates from the group’s final performance at San Francisco’s Winterland on January 14, 1978. Lyrics aside—which isn’t easy—it’s an exemplar of punk.

In one of the odd soundtrack’s oddest moments, yet another version of “Belsen” follows. This time it’s titled “Einmal war Belsen wirklich Vortrefflich” (“Belsen Vos a Gassa”) and features Ronnie Biggs, notorious as one of the gang who carried out the Great Train Robbery of 1963. Biggs escaped prison in 1965 and was in exile at the time of this recording (and, indeed, until 2001). Jones and Cook traveled to Rio de Janeiro to record the Swindle version of this and one other tune with Biggs. He’s no singer of note, but then one could argue that neither was Rotten in those days. There’s nothing remotely punk about Biggs’ gurgling vocal delivery, though.

Side Three of The Great Rock ‘n’ Roll Swindle focuses largely on material cut without any involvement by Johnny Rotten. The opening cut is “Silly Thing,” featuring drummer Paul Cook on lead vocal. It doesn’t really sound much at all like the Pistols (well, perhaps a de-fanged version of the band), but it’s a solid enough pop tune, and Cook acquits himself surprisingly well.

One of the few moments of any redeeming value in the Swindle film is a Sid Vicious showcase, a reading of Paul Anka’s “My Way.” The first part of the recording is built upon a lugubrious orchestral arrangement of the schmaltz classic, with Vicious camping his way through the lyrics in a mock-husky voice. After a moment or two of that nonsense, a sort of “orchestral punk” arrangement takes over, and Vicious—who, as a singer, still doesn’t hold a candle to Rotten, Cook or Biggs—is much more in his element. He seems to be parodying himself, and perhaps he is.

“I Wanna Be Me” likely comes from the 1976 sessions. It’s surprising that the song wasn’t cut for Never Mind the Bollocks. The band is tight, handling a mid-song full stop with accuracy, and—since it’s a band original—Rotten seems equipped with a full set of lyrics.

Next, Sid Vicious shows that “My Way” notwithstanding, he can sing after a fashion. A cover of Eddie Cochran’s “Something Else” is quite solid. Still, it’s perhaps more than a little unnerving to hear piano trilling along on a Pistols tune. For their trouble the band scored a #3 hit on the U.K. charts; the British have always had a greater appreciation for American classic rock ‘n’ roll than do Americans.

Another guest vocal—this time by Edward Tudor Pole / Ten Pole Tudor—is another cover. This time it’s Bill Haley and the Comets’ “Rock Around the Clock.” Tudor can’t sing worth a damn, and try as they might, the Pistols sound a bit tired here.

Steve Jones sings his “Lonely Boy.” Though he’d eventually do better on his solo album Mercy, here his vocals are hopelessly weak. His lyrics aren’t much better, and the rote chord changes are wholly unremarkable.

Ronnie Biggs sings “No One is Innocent,” a tune credited to him, Cook and Jones. Musically it sounds like nothing so much as a rewrite of any number of other Pistols tunes. Biggs’ lyrics (“God save…”) are meant to be funny or clever; they’re neither. The chorus’s unison refrain about Biggs having sold his soul for punk is almost clever.

The fourth side of Swindle opens with another Sid Vicious vocal. Again he’s covering Eddie Cochran; this time it’s “C’mon Everybody.” His lack of vocal ability doesn’t work against him here; in fact it’s an asset, helping to give the already-rocking tune just the right punk edge.

Another hopelessly strange track is “EMI (Orch),” which is just what it sounds like: a strings-and-tympani reading of the track from Never Mind the Bollocks, with Steve Jones providing a spoken-word recitation of the lyrics. As a recorded performance, it’s totally without value.

The title track from The Great Rock ‘n’ Roll Swindle is a standard yet catchy enough pop-punk number; it features vocal contributions variously from Vicious, Cook, Jones, Tudor, McLaren and others. It probably worked better in the film than it does on record. 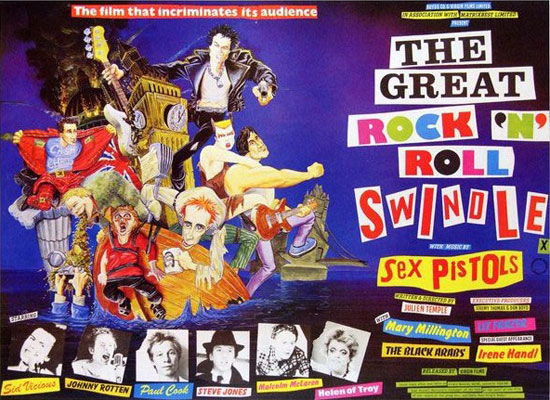 A spirited reading of the drinking song “Good Ship Venus” (retitled here as “Friggin’ in the Riggin’”) is an album highlight. The arrangement attempts to hybridize punk and orchestra music, and on that level it’s reasonably successful. Americans will recognize parts of the melody as “Yankee Doodle Dandy.” With a vocal from Steve Jones, the track was—inexplicably—one of the Sex Pistols’ highest-ever charting singles.

Even against the backdrop of the bizarre selections on Swindle, “You Need Hands” is deeply strange. Malcolm McLaren sings Max Bygraves’ 1958 music hall ditty while an orchestra provides support. Its inclusion seems designed to test the patience of viewers and listeners. If that’s the case, mission accomplished.

The Great Rock ‘n’ Roll Swindle concludes with “Who Killed Bambi,” sung by Tudor. It sounds like a tune from a stage musical, albeit one with the worst singer possible. Depending on one’s viewpoint, it’s a perverse or perfect way to end this mess of an album.

Upon release, Swindle charted in the UK, eventually reaching #7 on the album charts and earning a Gold record. Six singles were released from the album, and all made it to the Top 40 in England. Intentionally uneven, confusing and confounding, The Great Rock ‘n’ Roll Swindle nonetheless remains an essential part of the Sex Pistols’ (uneven, confusing and confounding) legacy.