They Go to Pieces: Peter Asher and Jeremy Clyde Team Up

Note: This is the first of two feature/interviews with Peter Asher and Jeremy Clyde, originally written for two different print outlets. There’s a tiny bit of overlap in the introductory sections, but the bulk of each story features original material unique to that feature — bk 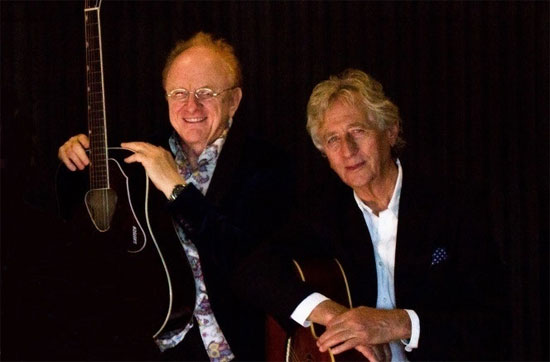 Pop music fans of a certain age will remember the duo Chad & Jeremy. They scored their first hit with “A World Without Love,” a song written by Paul McCartney. Right? No, wait: it was Peter and Gordon who had a 1964 U.S. Top 10 hit, and it was called “A Summer Song.” Right?

Wrong, on both counts. But that confusion is something that dogged both British pop duos throughout their heydays. Both groups enjoyed fame; Peter and Gordon (pals of the Beatles) scored quite a few hits at home and in the U.S., while Chad & Jeremy gained traction mainly in North America.

Gordon Waller passed away in 2009, and today Chad Stuart works mostly behind the scenes in the music business. But Jeremy Clyde has continued his acting, songwriting and performing career. And Peter Asher – nearly as well known for his production work (James Taylor, Linda Ronstadt and dozens of others) – remains active onstage. And now they’re together as a performing duo.

Aware that teaming up might only further confuse fans, Asher and Clyde make the most of the situation. Their live show is a highly engaging mixture of witty banter, rich storytelling and tuneful pop music.

“People would congratulate [Peter and Gordon] on being on the Patty Duke Show, and congratulate [Chad & Jeremy] on being on Ed Sullivan,” Asher says with a warm chuckle. “It was actually the other way around!” The two London duos certainly were aware of each other during their hitmaking years; in fact they were good friends. Chad & Jeremy helped give Peter and Gordon one of their first big breaks.

Clyde recalls that in the early ‘60s he and Chad Stuart were nearing the end of an extended engagement at a London hot spot. The owner was looking for an act that could take over the lunchtime gig. “There’s my friend Peter Asher and his mate Gordon Waller,” Clyde replied. “They’re over at the Pickwick Club; I’ll ask them.” They got the job.

“And then within the year we were in the charts – both of us – and nobody could work out which was which,” Clyde says.

The pair unravels the confusion in the up-close-and-personal live show. Asher has toured his own acclaimed song and stories show, but says that collaborating with old friend Jeremy means “twice the stories and twice the hits.”

He pauses, turning mock-serious on that point. “Someone rather uncharitably pointed out that between us, there’s well over a hundred years of stories,” Asher deadpans. “Which is an appalling thought!”

The show features Asher and Clyde harmonizing and taking turns singing lead on hits like “Woman,” “A World Without Love,” “I Go to Pieces” and “Lady Godiva” (all Peter and Gordon hits) as well as Chad & Jeremy singles “Yesterday’s Gone,” “A Summer Song,” and “Before and After.”

A century’s worth of combined experience yields some wisdom. Asked to cite the best advice he ever received as a performer, Peter Asher quotes his late father: “Don’t leave your wallet in the dressing room,” he chuckles.