Sloan: Past, Present and Future 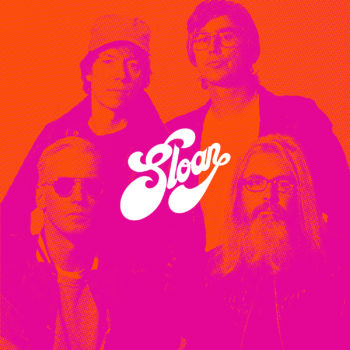 Indie rockers Sloan have built an impressive body of work since forming in Halifax, Nova Scotia back in 1991. Whether the foursome should be classified as indie rock or power pop is open for debate; what’s certain is that the group makes memorable, hooky rock in a style that recalls both the Beatles and Fountains of Wayne (to name just two), but has an inimitable character all its own. The band recently released 12, another winning collection of original songs.

Bill Kopp: There’s a kind of consistency across Sloan albums. Some bands feel the need to do certain things to inspire themselves: use a different studio, a different producer, maybe add an instrument they don’t usually use, bring on a guest musician, and so on. Does Sloan make a point of avoiding those kind of strategies?

Jay Ferguson: We usually make the record ourselves with the engineer. And when we’re making records, we’re doing it on a budget. Everybody has family and they’re tied close to home. So, generally, we like to work in Toronto and we have our own studio; it’s kind of fun.

I can only speak for myself, but for outside inspiration, I think you just look to yourself or from a record that you just heard. It’s like, “Oh, wow. I really like that drum pattern. I’m gonna write a new song over top of it.” Or it could just be you have old songs leftover from five years ago and you’re just gonna work on those again. I listen to music a lot and I enjoy it. Whether it’s something new or something old, I’ll often find something either lyrically or musically that will set me on a path to create something new.

Bill Kopp: Most every interview—and by extension, most every story about Sloan—remarks on the fact that the band’s lineup has been stable and that all four of you write. To what degree do you think those two things are related? Perhaps, in terms of helping maintain a balance within the group … unlike, say, late period Beatles when George Harrison got frustrated with getting one song per album.

Jay Ferguson: Yeah, I think that’s probably a big part of it. You’re right, and the Beatles are a good example. Not including Wonderwall and Electronic Sound, his first full album was a triple record. So, obviously, he had a lot of catalog that wasn’t getting the time of day. During the Let It Be sessions, he’s trying to sell “All Things Must Pass” to the band and they’re not that enthused by it. He’s probably quite frustrated at that point.

So, with us, the band is an outlet for everybody, a way to express your own songwriting and sort of do whatever you want, and it’s just gonna flow.

Sloan consistently earns high marks from critics. But the band has never broken through on a large-scale commercial level. Is doing that even a goal?

To break through on a large level, you really need somebody spending a lot of money on your behalf. I do think we have records that could fit in on rock radio, but maybe not pop radio anymore. It’s a different landscape, but of course, it would be great. But I don’t think it’s our goal.

We’ve had good commercial luck in Canada, but not so much in the United States. But we realize that it’s a timing game, it’s a young man’s game, often, and also it’s a money game as well. If you want a song on radio, you really have to spend a lot of money in radio promotion to get it across to people. We’re not oblivious to the way things work. And I don’t mean that from a cynical point of view; I just mean that from a realistic point of view.

When I first saw Sloan live onstage, I was struck at how—at least on that day and solely from my perspective—the band sounded quite a bit different from its studio recordings. What do you see as the relationship between live performance and the art of making albums?

When we’re mixing an album, I don’t know if we’re really considering how it will sound live. The studio is a different thing than a live show. And sometimes, on songs in the studio, it might not be everybody playing live at the same time. So, for example, Andrew [Scott] plays drums in the live setup. For the songs that he sings on record, often, he’ll play guitar on them, and kind of do everything. And there are some some songs of mine where Chris [Murphy] may play the drums and I’ll play all the guitar. So take a couple of scenarios like that and put it in a live situation: I’ll be playing bass on Andrew songs, and Patrick [Pentland] will be playing guitar on my songs, and Andrew may be playing drums on my songs. They can change a little bit in the live scenario, and sometimes they’re heavier, or sometimes they’re faster or slower. So what you get live is … we’re not trying to do something different than the record, but just by the nature of who’s playing what it will all sound a little bit different with it.

What’s the best advice you ever received with regard to your musical career?

I think we had good advice from our manager early on. He, originally, was our co-manager, and then he became our sole manager, and now he’s sort of more just an overseer business manager, just sort of looks at contracts and things like that. His name is Chip Sutherland, and he was really wise in the early days. He told us to set up our own record label and invest in that while we were on DGC. He said, “You know what, guys? Who knows how long DGC will last?” DGC is gone now, and we’re still here.

We were sort of eager to put out our own EP at first and we did that, and also to put out some other records from other local bands from Halifax just to spread our good fortune and opportunity around. He was like, “Keep that going; keep that percolating in the background. Put out some things.”

I know it’s a bit premature to ask this when the new album’s just come out and you’re touring in support of it. But what’s next for Sloan?

We’re already sort of working on the next project right now, another reissue project. Over the past few years, we’ve done a couple of reissues. We did one of Twice Removed [1994], our second album, and then did a reissue of One Chord to Another, our third album [released 1996], and we made box sets out of each record. The one we did for One Chord to Another was a three-album box set where you get One Chord to Another and then a second album of demos and outtakes. The third album was like a homage to the Beach Boys’ Party! record from the 60s where we’re playing a bunch of covers in sort of a faux party atmosphere, and there’s also a 7-inch single with a couple of demos and a 32-page book.

And then we toured One Chord to Another and played the album front to back. So, we’ve kind of, in recent years, been hopscotching: do a new album and a tour, and then do a reissue box set and a tour behind that, and then do a new album. So, the next project we’re working on is our fourth album. It’s called Navy Blues [1998] and we’re prepping a box set for that record, which will have two albums of demos and outtakes, and a big book. That’s probably [going to be released] fall of 2019.