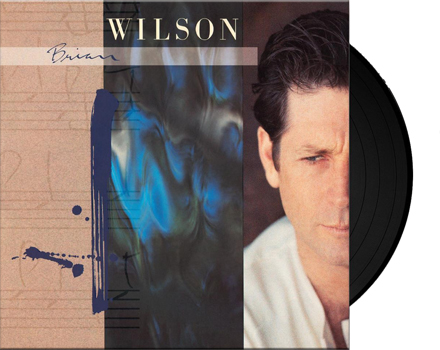 If we’re being honest with ourselves, most sympathetic critics grade the post-Beach Boys music of Brian Wilson on a curve. Unquestionably a musical genius, Wilson is responsible for Pet Sounds and the legendary long-thought-lost SMiLE, arguably two of the most revolutionary albums in the history of popular music. The Beatles certainly regarded Pet Sounds as such.

Wilson’s personal issues are the stuff of legend (and book, and film), too: his issues with domineering father Murry Wilson, his deafness in one ear (and how it may or may not have got that way), his battles with some of his Beach Boys band mates over the direction their music should take, his schizophrenia, his work with various collaborators (some brilliant, others much less so).

And, ultimately, there’s his music. Setting aside the “Brian’s back” efforts of his old band – an exercise that resembled Sly Stone’s “comebacks” in frequency, futility and (sad to say) cynicism – Wilson effectively left the Beach Boys in the late 1960s.

Among many, both Pet Sounds and SMiLE are considered Brian Wilson projects rather than Beach Boys records. One can convincingly argue that brothers Carl and Dennis plus the rest of the group were as much session hands on the recordings of that era as were Glen Campbell, Van Dyke Parks, Hal Blaine, Carol Kaye and Keith Allison. In fact the 1967 single “Caroline, No” b/w “Summer Means New Love” was credited to Brian rather than the Beach Boys.

But it wasn’t until 1988 that the man finally released a proper solo album. And the circumstances surrounding that album were more than a bit unusual. At the time, Wilson was under the sway of therapist Eugene Landy (memorably depicted by Paul Giamatti in the biopic Love and Mercy). Setting aside for the moment whether it was a good idea or not, so complete was Landy’s hold over Wilson that the non-musical doctor was credited (in bold!) on the Brian Wilson album sleeve as Executive Producer. Five of the album’s eleven songs have a composer’s co-credit to Landy as well.

In any era, the existence of four co-producers on an album is a red flag. At best it connotes a lack of unified purpose among the sessions; at worst it suggests an artist who’s difficult to work with. Alongside its namesake, Brian Wilson credits producers Russ Titelman, Jeff Lynne, Lenny Waronker and Andy Paley. And if one digs into the sleeve credits, phrases like “rerecorded by…” show up alongside a long list of studio locales.

On the occasion of the 30th anniversary of Brian Wilson’s release, it’s possible – useful, even – to set as much of that back story and trivia aside and focus on the music.

Productionwise, Brian Wilson sounds very much of its time, though perhaps not nearly as much so as Imagination, the album he’d make a decade later. And while detailed information isn’t available, it’s safe to assume that Wilson’s co-writers (save perhaps Landy) did the lion’s share of the lyric writing; let’s just agree that (with some notable exceptions) Brian’s genius does not seem to extend as reliably to song lyrics as it does to composition and arrangement. But dig beyond those parts of the songs and you’ll discover some good (and occasionally great) music on Brian Wilson.

The album opens with what is far and away its best song. “Love and Mercy” suffers from dated synthesizer pads that threaten to overwhelm Brian’s somewhat fragile vocal, but even amidst the ‘80s sonic trappings, the simple beauty of the piece (with lyrics by Brian himself) comes through.

Apparently producer Joe Wilson thought “Love and Mercy” good enough to all but co-rewrite it as the title track of 1998’s Imagination. To his credit – though that album as a whole steers toward the middle of the road and includes dubious contributions from marginal musical characters like Jimmy Buffett – “Imagination” has a transcendent vocal arrangement (find the a cappella mix if you can) that shines in a way that the original recording of “Love and Mercy” only hints at.

And in 1995, producer Don Was recognized the brilliance of “Love and Mercy” in an even more useful way: with a different set of musicians and a much lighter production hand, he recorded Wilson leading a completely new (and far superior) recording of the song for the film (and associated soundtrack for) I Just Wasn’t Made for These Times. (Fun fact: On the sleeve notes for IJWMFTT, Brian Wilson is listed as the sole composer of “Love and Mercy.” Take that, doc.)

Cowritten with the Dream Academy’s Nick Laird-Clowes (the latter would lend his lyrical skills to the David Gilmour-led Pink Floyd around the same time), “Walkin’ the Line” is a good combination of the classic Beach Boys vibe with then-current arrangement styles. In fact it sounds a bit like very late-’60s and early ‘70s Beach Boys crossed with, well, the Dream Academy.

“Melt Away” suggests what SMiLE might have ended up sounding like had Brian revisited it then instead of two decades later (thank goodness that didn’t happen). Brian doesn’t shy away from occasional use of wordless doot-doot vocals, which is fine. Because for him the sound and emotional content of the vocals is often at least as important as the words themselves.

Some dicey keyboard textures and creaky falsetto backing vocals mar the otherwise fine “Baby Let Your Hair Grow Long.” The arrangement again recalls SMiLE session work, with ringing snare drums and gloriously booming tympani that evoke thoughts of prime-era Brian. Lyrically it’s more than a few steps down from “Caroline, No,” but in the context of Brian’s work overall, it’s not an embarrassment.

“Little Children” is a bit overproduced and features tiredly familiar lyrics (“Marchin’ along / singin’ a song” in the chorus, for goodness’ sake), and the repeated phrase on the outro threatens to induce a headache. Best skipped.

Thanks to “One for the Boys,” all is forgiven, however. The wordless a cappella track is a distant cousin to “Our Prayer” from the SMiLE sessions, and shows that Brian Wilson’s mastery of subtle and highly evocative chordal shadings is unmatched. It’s probably not hyperbole to suggest that Brian’s most ardent fans would eat up an entire album of this sort of thing, should he ever deign to make one. 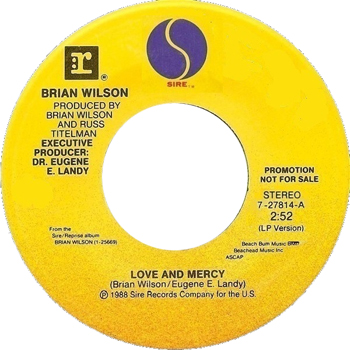 “There’s So Many” is somewhat turgid musically. Sleigh bells and lovely backing vocals (mostly Brian, with perhaps a spot of help here and there by Andy Paley) only help so much. Again the now-vintage synthesizer patches make the song sound woefully of its era. And Brian’s lead vocal seems adrift in the mix. A harp glissando around the two-minute mark is simply too much, and not in a good way.

Opening with a chorus, “Night Time” immerses Wilson even deeper in the musical aesthetic of the late 1980s; thankfully the breezy verses have a more timeless feel. The four-writer credit (shades of the 21st century radio pop/pap method) seems indefensible in light of the song’s underwritten lyric. A bit of regrettable saxophone creeps into the song’s second half; its only defense is the now-common refrain: “Well, it was the ‘80s.” One supposed things could have been worse; it could have been another synthesizer.

In light of Jeff Lynne’s signature heavy-handed production style, one might expect “Let it Shine” (written and produced by Wilson and Lynne) to be a dog. Happily it’s nothing of the sort. The simple homespun lyric is nice enough, and Lynne seems content to dial back the production flourishes that make his fingerprints indelible on most of his work. “Let it Shine” is a welcome highlight of Brian Wilson, one that demonstrates Jeff Lynne’s keen understanding of what makes Wilson special.

Andy Paley understands these things as well, as evidenced by “Meet Me in My Dreams Tonight.” Judicious use of (electronic?) handclaps helps move this bouncy number along; it has a grand, expansive yet light feel, qualities shared with some of the best Beach Boys music. (After these sessions, Paley went on to work with Brian an another project; the bootlegs from what what would have been Sweet Insanity show that he sometimes – but not quite always – got it right.)

Brian Wilson ends with “Rio Grande,” a, er, grand suite that – with the benefit of informed hindsight – sounds very much like a distant relative of SMiLE. It’s almost as if Brian, then distanced from that abandoned opus by some two decades, decided to revisit some of its musical themes. But not having heard any of the music in 20 years, perhaps he did so purely from memory. Some of the wonderfully kitschy musical motifs found in “Heroes and Villains” and even “Do You Dig Worms” crop up in mutated form in “Rio Grande.” Wilson has often gravitated toward big ideas, and “Rio Grande” swings for the fences with its attempt at painting a sound picture of a slice of the American west. If one makes some allowances for a (once again) slight ‘80s-ness, “Rio Grande” is full of charms that show Wilson’s creative muse as strong and enduring as ever.

When first listening to Brian Wilson, most listeners had never heard the then-unreleased (but heavily bootlegged) SMiLE tapes; the ones who had (this writer included) displayed broad smiles when hearing “Rio Grande” around its 2:30 mark. Some swirling, wordless vocals are clearly modeled on the “Fire” or “Mrs. O’Leary’s Cow” sections of the 1967 masterwork. One can almost imagine Brian thinking to himself (or discussing with the Phil Spector voice in his head), “Well, since I’ll never finish SMiLE, how about I do this instead?” And one might further conjecture that the positive critical notices the suite earned might have helped place Brian on the path toward reconsidering the long-abandoned project. A sequence of musical snippets assembled into a whole, “Rio Grande” also bears some stylistic similarities to the second side of the Beatles’ Abbey Road.

Not counting the scuppered Sweet Insanity project, fans of Brian Wilson and his work would have to wait seven years for more music. When 1995 rolled around, they got both a reunion/collaboration with SMiLE co-conspirator Van Dyke Parks (1995’s Orange Crate Art, which was really a Parks album with Wilson vocals) and I Just Wasn’t Made for These Times, a loving Don Was project that paid tribute to Wilson while involving Brian in the proceedings. It wouldn’t be until later that Wilson would begin to come to terms with (and rightly capitalize upon) the earlier phase of his body of work, reviving both Pet Sounds and SMiLE in various and amazing ways, both on record and live in concert. Today “Love and Mercy” from 1988’s Brian Wilson is a centerpiece of his concerts. And when one forgives its dated excesses, Brian Wilson is an album that continues to reveal its charms.