50 Years On, The Legacy of Brian Wilson’s Pet Sounds Endures
“I had in my mind exactly what I wanted when I got to the studio.”

When Brian Wilson recorded the album Pet Sounds in 1965-66, he didn’t simply raise the bar for nuance, quality and care put into the making of a pop music album. He set a new standard of quality that would inform the work of countless artists who would come after him. The former Beach Boys songwriter and leader is currently celebrating the 50th anniversary of the release of Pet Sounds with a world tour.

When Brian Wilson made the decision to move beyond the subject matter of much of his previous work for the Beach Boys – songs that glorified sunny California, girls on the beach, muscle cars and surfing – he realized that he could do with some help. 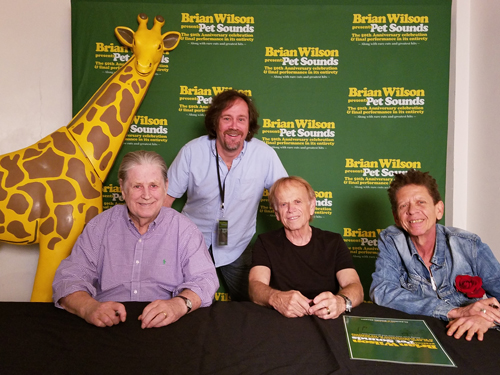 Wilson’s more ambitious musical arrangements called for similarly adult lyrics. As Domenic Priore (author of two books on the Beach Boys as well as related album liner note essays) tells me, Brian Wilson had been deeply impressed by the music and lyrics on The Byrds‘ Mr. Tambourine Man album and The Beatles’ Rubber Soul. “For Pet Sounds, Brian knew he had to take his lyrics into another area than they had been before.” For a collaborator, Wilson went in what must have seemed to those around him a most curious direction, choosing a 26 year old advertising jingle writer named Tony Asher.

The way Wilson recounts the tale – no doubt answering a question he’s fielded hundreds of times – it was all very simple. “I met [Asher] one time at a party, and he told me if I ever needed someone to write lyrics, he could do that,” he says. “So he came over and we wrote Pet Sounds.” Priore adds, “Asher worked for a very hip advertising company called Carson/Roberts. Something was going on in New York in advertising during the ‘60s, but California was like the Wild West and had crazy, progressive ideas.”

Wilson’s collaboration brought out the best in him and Asher, resulting in classics like “God Only Knows” (often cited as Paul McCartney‘s favorite song), “Wouldn’t It Be Nice” and the heartbreaking “I Just Wasn’t Made for These Times.”

With the Beach Boys out on tour without him (session guitarist Glen Campbell replaced him on several dates), Wilson hunkered down for the better part of a year in L.A.’s top studios to make Pet Sounds.

Speaking about the 2015 film Love and Mercy, Wilson readily offers, “I liked it when Paul Dano portrayed me as a record producer in my early 20s.” Wilson is justifiably proud of the work he did in the mid 1960s; his command of the studio – essentially treating it as an instrument in and of itself – remains a marvel. Long circulated among hardcore collectors (and eventually spotlighted on various official expanded-version reissues), Pet Sounds session tapes show a man completely in control.

Working with Los Angeles’ top session men and women (later dubbed “The Wrecking Crew,” themselves the subject of a 2015 documentary of that name), Wilson aimed for – and got – the performances he heard in his head. “I had in my mind exactly what I wanted when I got to the studio,” he tells me. “I told the musicians what to play.”

Pet Sounds would spawn three hit singles, including a double-A-side and the album’s sole cover tune, “Sloop John B.” But live onstage, the Beach Boys weren’t really in a position to recreate Pet Sounds‘ lush, deeply textured studio sonics. Priore insists that “in 1966, had anybody taken rock seriously enough, you could have put all of those same instruments up on stage at the Hollywood Bowl the way you would have at a Tchaikovsky spectacular. The problem was, nobody took rock and roll seriously enough back when Pet Sounds came out.”

Times have changed in the ensuing 50 years. With a large group that features guest musicians Al Jardine and Blondie Chaplin – both former Beach Boys themselves – Wilson leads a production that faithfully recreates Pet Sounds start to finish. And Wilson says that this tour will mark the final performances of the landmark 1966 album.

So what’s next for Brian Wilson? “We might record an album,” he says. “We don’t know what kind of music, but we might try to write some songs.” Whatever he chooses to do, Wilson can proceed safe in the knowledge that he has already created one of the most important and enduring albums in all of popular music: Pet Sounds.

When the Beach Boys’ Pet Sounds was released in May 1966, few listeners could have predicted its enduring legacy. Continuing his musical departure from that group’s earlier songs about cars and surfing, songwriter-producer Brian Wilson crafted an album that dealt with relatively more “adult” themes like love and loss. Now, more than 50 years later, the post-Beach Boys Wilson and his band are touring a live performance of that historic album, billed as the final Pet Sounds performances. 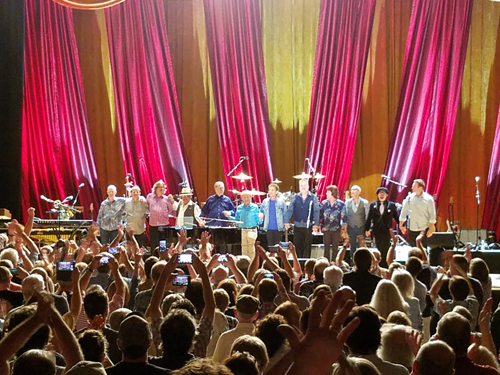 Wilson understands and accepts that countless listeners have been moved to tears by the music and lyrics of songs like “Caroline, No” and “God Only Knows,” the latter sung on Pet Sounds by his brother Carl. “I think the spirituality, the vocal harmonies, the melodies and the lyrics all appeal to people,” Wilson says.

Modern-day listeners might be surprised to learn that on its original release, Pet Sounds was considered a commercial disappointment in the US; it fared much better – both chartwise and in critical reviews – in England, where it was almost immediately hailed as a masterpiece. For their part, the Beatles readily admitted that Pet Sounds was a major inspiration for the musical adventures of Sgt. Pepper’s Lonely Hearts Club Band, released just over a year later. Wilson doesn’t pretend to understand why the British embraced Pet Sounds so warmly, other than noting, “I think the people in England were more sensitive to Americans’ music; they were more in tune with it.”

Pop music historian and Beach Boys scholar Domenic Priore, author of Look! Listen! Vibrate! Smile!, points out the influence Pet Sounds would exert both overseas and at home. “In England, Pet Sounds got accolades from the members of the rock cognoscenti,” he notes. Priore also credits the album’s arrangement and production qualities as influences upon mainstream pop such as Petula Clark‘s “Don’t Sleep in the Subway,” songs by the Association (“Along Comes Mary”) and many other hits. “Those were all grandiose productions that could have only happened because of Brian Wilson’s production of Pet Sounds,” he says.

In 2003, Rolling Stone ranked Pet Sounds second – bested only by Sgt. Pepper – on its list of the “500 Greatest Albums of All Time.” But within the half-century-plus career arc of the Beach Boys, the group’s ambitious music of that era hasn’t always been embraced. Priore notes that in the early 1970s – a time during which Brian Wilson was largely absent from the group – the Beach Boys worked a significant portion of the Pet Sounds material into their live shows. “They would do a lot of college touring, trying to convince people that the Beach Boys were, indeed, worthy of counterculture respect. Eventually [American audiences] started saying, ‘Hey, this Pet Sounds, maybe there is something behind this.’”

But with the release of a 2LP retrospective focusing on their early surfing- and car songs, the group turned its back on ambitious music, becoming and remaining an oldies act. “They blew this all in 1974 when it became nostalgia with the release of Endless Summer,” Priore says. Moreover, Wilson – who was suffering from improperly-treated manic depression and schizoaffective disorder – was nonetheless brought back into the fold for numerous “Brian’s back!” publicity events that did little to burnish the group’s reputation.

In the 21st century, Wilson – working with his own group – doesn’t shy away from his ambitious studio creations of the mid 1960s; in fact he embraces them. In 2004 he recorded a new version of SMiLE, his legendary unreleased 1966 follow-up to Pet Sounds. Meanwhile, his former group remains a strong draw, playing “Surfin’ Safari,” “California Girls,” “Kokomo” and the like.

Still, these days Wilson – who tours with a large band that includes former fellow Beach Boys Al Jardine and Blondie Chaplin as well as longtime members of critical-darling band Wondermints – doesn’t really go in for deep musicological analysis of Pet Sounds or the contemporary performances of that music. Asked about the touring band, he’s straightforward. “I like the way my band members play their instruments,” he says. “And they sing great, too.”