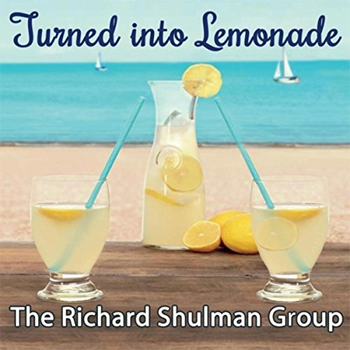 Conveying a spirit of hope and optimism without the use of words is a challenging goal. But on Turned Into Lemonade, the latest from the prolific jazz/orchestral/new age composer (he’s released more than two dozen albums), that ambitious goal is realized.

This all-original jazz outing is credited to the Richard Shulman Group: Shulman plays acoustic piano, backed by the lush yet understated musicianship of Rick Dilling (drums), Zack Page (bass) and Jacob Rodriguez (saxophones). Noted vocalist Wendy Jones lends her talents on three of the album’s 14 tracks. Shulman’s brief liner notes offer a bit of context for each tune, but in most cases, the vibe comes through without the need for additional explanation.

“Atmosphere” is carried by Rodriguez’s lovely, memorable and intimate saxophone melody; Shulman decorates the arrangement with subtle piano work, but he and the rhythm section largely leave open spaces for the sax lead. “I Claim My Day” has a quiet demeanor, with a hint of a hip, urbane (and urban) feel. The tune develops into more of a group arrangement as it unfolds. Throughout the album, bassist Page is the quiet engine of the quartet; he moves the music forward in such an understated fashion that it’s easy to overlook his important contribution; listen closely and don’t make that mistake.

As he mentions In his album notes, Shulman’s “In Between the Blue and Green” is an older composition that went unused for more than three decades because the composer felt it too much like Bill Evans’ immortal “Blue in Green,” first heard on Miles Davis’ landmark 1959 LP Kind of Blue. While there does exist a surface similarity, Shulman needn’t have worried; there’s a vibrant, uptempo feel to his work that recalls Vince Guaraldi at least as much as Evans.

Wendy Jones begins the emotive ballad “The Gifts You Gave to Me” unaccompanied; it’s a breathtaking and highly effective approach for the torchy tune that recalls some of Barbra Streisand’s best work. Rodriguez judiciously inserts brief responsive phrases to Jones’ vocal lines. The soulful, vaguely bossa nova stylings of “For Mom” need little explanation beyond the title; again, it’s Rodriguez who’s the star here, with his breathy and supple melodic lines.

“No Matter What They Say” seems to follow on seamlessly from “For Mom,” working almost as a medley. Initially, the piano melody of “Homage to Pharoah” has a Bob James feel, but Jones’ wordless vocals—often in lockstep with Rodriguez’s sax—take the song somewhere else entirely. Shulman opens up and takes an extended solo, and it’s a thing of grace and beauty. Rodriguez’s solo on the extended piece is equally impressive.

The composer describes “It’s All Inside” as a musical prayer, and it’s built around a simple yet elegant melodic line delivered on saxophone. Rodriguez is front and center for the entirety of this tune. “Finding Peace” is the last of three songs on Turned Into Lemonade to feature Wendy Jones. The song features an introspective lyric delivered in impeccable fashion. Rick Dilling’s brush work gives a soulful, swaying vibe to the song; Shulman’s delicate piano lines are the perfect complement to Jones’ vocals.

The loping and playful “Buried Diamond” represents another old tune that Shulman dusted off and completed for his latest album. One suspects he was listening to a lot of Guaraldi in the early ‘80s. And that’s not a bad thing; not at all. The title track applies cool jazz style to what’s essentially a pop melody. Some carefully-placed stops and starts add nice texture, while Rodriguez’s soprano saxophone dances around the upper register.

Brazilian textures dominate “Sunny Samba,” easily the most uptempo track on Turned Into Lemonade. Rodriguez and Shulman take turns soloing, and the joy the quartet is experiencing radiates through the entirety of the nearly six-minute tune. It’s followed by another samba, the faster and very different “Write Again.”

The fourth album from the Richard Shulman Group concludes with “Nostalgia,” described by its composer ad a duet with saxophonist Jacob Rodriguez. The elegiac song is a lovely, melancholy meditation.