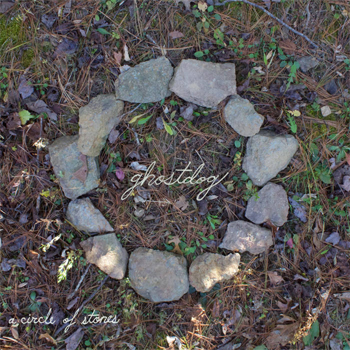 Yearning, melancholy midtempo rock with a dreamy feel is merely one of the stocks-in-trade of Asheville-based Ghostdog. But it’s worth noting that the group playfully describes its music as “Wussy-boy emo pop.” The group’s second EP, A Circle of Stones opens with “Party On, Emma’s Grove.” Will Isaacson’s complex guitar figure and Adam Freshcorn’s knotty drum patterns seem to circle each other cautiously. Slashing, angular chording suggests that Ghostdog traffics in a gently melodic rethink of post-rock, with subtle jazz touches. It’s nearly three minutes before Isaacson’s gentle vocal enters the mix; at this point the song may remind some listeners of early 1970s, Bob Welch-era Fleetwood Mac.

“Abusing Time and How to Handle It” begins similarly, with a measured tempo and a plaintive, mournful vocal fronting a gentle jangling electric guitar. But no sooner than the listener settles in to that arrangement, just ahead of the two-minute mark Ghostdog shifts gears. “Abusing Time and How to Handle It” is transformed into a spirited and (by rock standards) relatively complex melody. Enthusiastic and precise drum fills heighten the energy level.

Less than a minute later, the arrangement changes again; this time it’s even more ethereal than the manner in which it began. Shimmering guitars provide a feathery aural bed upon which the nearly chanted vocals rest comfortably; there’s almost a shoegaze aesthetic to the song. This character is maintained for a few minutes, at which point everything fades slowly – very slowly – to quiet. In under seven minutes, Ghostdog has provided a tidy sampler of the group’s versatility, all in the context of a single song.

“I Don’t Wanna Go” further builds upon that foundation, with the title phrase serving as the song’s anchor. Once again, Ghostdog moves trough more than one arrangement, delivering uptempo choruses that contrast nicely and effectively with the more downtempo verses. There’s a post-rock aesthetic in the choruses of “I Don’t Wanna Go,” but it’s leavened with a focus on melody. An alluring guitar solo is supported by Reid Parler’s sympathetic bass line and lively drumming. Ghostdog understands the mechanics of pop songcraft – verses, choruses, bridge – and wisely keeps its ambitious musical ideas within those parameters.

As “S’mores” opens, there’s a muted quality to the guitar that evokes the feel of a stereo speaker wrapped in a heavy blanket. Eventually the muffled tone gives way to a brighter, more natural sound. Again, the interplay between Freshcorn’s drumming – as much a tonal element as a percussive foundation – and Isaacson’s intricately picked electric guitar is mesmerizing. The song is halfway over before the sorrowful vocal floats into the mix. Ghostdog’s now-standard approach of contrasting slow/fast, soft/hard musical textures is applied here as well, but the transition between the styles is more gradual.

A Circle of Stones concludes with “Puzzle Pieces.” Musically, it’s very much a piece with the EP’s other songs, but the group’s self-described emo character shines through a bit more obviously. Lyrics like “it’s so damn hard to let myself trust anyone at all” embody the teen (and early-twenties) angst that characterizes emo. But the caliber of musical arrangement and musicianship elevates Ghostdog well above other purveyors of that style.

Upcoming Asheville dates for Ghostdog include a June 18 show at Burger Bar.