Peak Hour
Though the group had had hits before – most notably the 1964 single “Go Now” – the Moody Blues’ most enduring material is found on its “core seven” albums beginning with Days of Future Passed. And it’s upon that period that The Lost Chord focuses. The studio versions of the Moodies’ densely-layered songs often feature multiple acoustic guitars, several keyboards, flute and tambourine in addition to standard rock band instrumentation. 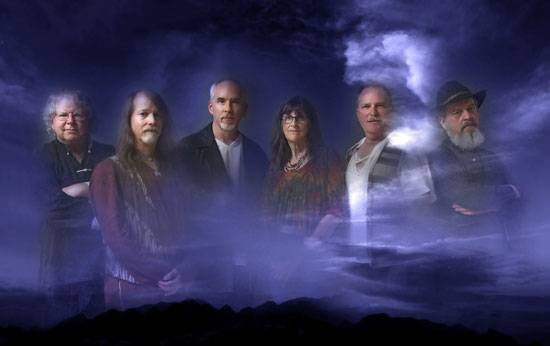 But even when recreating those sounds, there remains room for the members of the Lost Chord to assert their individuality, if only a little. “There are cases where we have to come up with a live ending,” Hoover says, “because [on the records] a lot of songs just fade out.”

Hoover believes that part of the appeal of the Moody Blues’ music comes from the band having a foot in multiple styles. “They’re ‘prog’ rock and psychedelic rock rolled up into one,” he says. “And they have a lot of mystical and spiritual messages in their lyrics.” The Lost Chord reinforces those ingredients through deft use of video-screen effects onstage. “That gives people something more to look at than just us,” he says. “It’s more interesting than just having colored lights.” 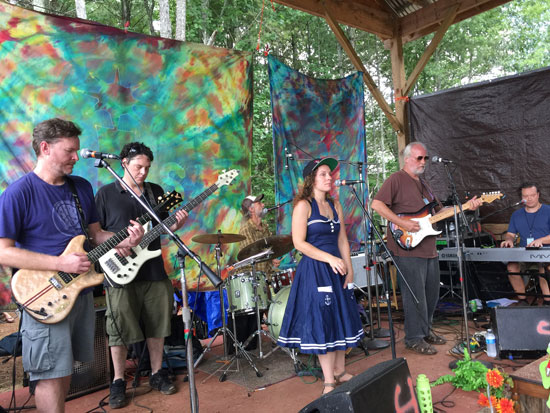 One More Saturday Night
For the deepest immersion in the psychedelic music experience, one need look no further than the Grateful Dead. Few groups have enjoyed a more fervent and dedicated fan base than the San Francisco group. The Dead officially ceased operations in 1995, and by 2003, Asheville’s Phuncle Sam began playing the group’s music locally. Phuncle Sam’s earliest regular gigs, known as Dead Night, took place in the Garage, just outside Biltmore Village. “For awhile, we did it once a month,” guitarist Evans says. “And then we did it once a week for a little while.”

The band’s appeal was a bit narrow in those early days. “People at the clubs in town really did not want to know about Grateful Dead,” Evans says. That gradually changed, as Phuncle Sam did the work of building a loyal fan base of its own. This February will mark the six-year anniversary of Phuncle Sam’s weekly acoustic offshoot, the Free Dead Friday performance series.

The band claims a repertoire in excess of 200 songs, and the jazz aesthetic of the Dead’s material – with a focus on improvisation – means that audiences never see or hear the same show twice. And that’s a remarkable feat for Phuncle Sam, a band that has played several hundred shows since its inception. 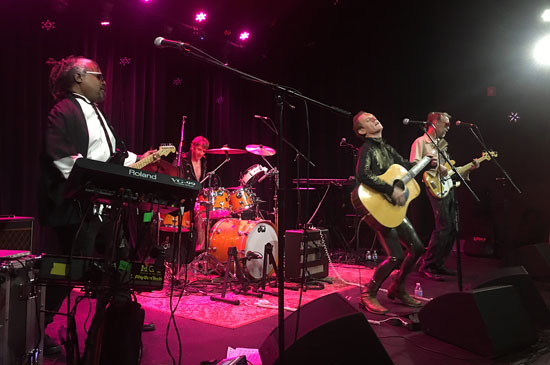 Sound and Vision
Wham Bam Bowie Band has the advantage of a widely varying, eclectic body of work form which to choose. Every the restless musical chameleon, Bowie worked in glam rock, electronica, soul, krautrock and many other styles. That variety – and the sheer number of hits within it – keeps things interesting for the WBBB. And despite the band’s excellence at re-creating the music – they’ve played entire Bowie albums and are now working on building the repertoire to include one of the most challenging, 1973’s Aladdin Sane – Casson is modest about the band’s musical prowess. “What we do is more like an interpretation than an impersonation,” he says.

Meanwhile, Casson has his own original band, the Cheeksters; with six albums to its credit, that project remains his primary musical focus. And as seriously as he and his band mates take the Bowie tribute group, Casson is careful not to overexpose the band. “We keep the local shows to once every three months or so,” he says. “I want to keep it special so that when we do it, it’s exciting for the whole band, and our hearts are fully into it.” And it’s important to him to please the fans. “Bowie fans are a rabid bunch,” he says. “They really are serious.”

And the musicians who play in Asheville’s tribute bands are serious as well. Singing and playing in homage to another’s work isn’t the same as performing one’s own original music, but for the members of these local groups, playing in a tribute band scratches a musical itch all its own. “To me,” says Somewhat Petty’s Goldman, “a tribute group is paying respect to the person or band that created the music.” And in the process, they’re bringing joy and entertainment to local music fans.