Thank You, Man: Asheville’s Crop of Tribute Bands (Part One)

Amid its vibrant musical communities centered around artists creating original music in Americana, rock, blues, jazz and other genres, the Asheville music scene has kept a special place in its collective heart for tribute acts. More than 13 years ago, a young quartet of high-school age musicians played a sound-alike set of Beatles classics at the Bele Chere festival. Though they couldn’t have known it at the time, the members of Yesterday’s Tomorrow were the vanguard of a vital mini-scene.

There are varying degrees of musical tribute: some groups look – or at least costume themselves – like the original artists, and painstakingly reproduce every trademark stage move. Others simply focus on the music. And even in the latter instance, there are many different ways of approaching the material. Bill C. Evans, guitarist for Phuncle Sam, one of Asheville’s longest-running tribute groups, explains that when his group pays homage to the Grateful Dead, “it’s not like Beatlemania; Grateful Dead music leaves lots of room for improvisation. Their songs have basic structures, but within them, there are always opportunities to be different.”

At the other end of the sonic spectrum lies one of the area’s newest tribute groups, The Lost Chord. Led by guitarist Sherman Hoover, the sextet goes to great lengths to recreate the sound of the Moody Blues’ classic era, 1967-72. Keyboardist Gary Byrne goes so far as to use samples created by the Moodies’ original keyboardist, Mike Pinder. Hoover points out that duplicating the British group’s rich, symphonic pop ambience is a challenge. “I don’t think it could be pulled off with only five people,” he says, noting that for many years, the Moody Blues themselves “couldn’t even pull it off live; it was kind of stripped-down.”

And in between those two bands’ approaches is Wham Bam Bowie Band, led by Mark Casson. Casson’s band – featuring top-notch local-based musicians including guitarist André Cholmondeley, drummer Jim Neu and multi-instrumentalist Aaron Price – has the built-in advantage of a singer who sounds uncannily like Bowie. “We want to stay as close as possible to the [original] recordings,” Casson says. “We want to simulate hearing the record live as close as we could, without it actually being David Bowie doing it.” But the WBBB’s approach leaves plenty of room for the individual musicians to express themselves. Casson notes that Cholmondeley – who also leads Frank Zappa tribute band Project/Object – “synthesizes sounds through his guitar; he’s able to handle a lot of the quirky stuff that’s on the record, including saxophone parts.”

Less musically demanding – but no less beloved among music fans – is the body of work created by guitarist-songwriter Tom Petty. The Gainesville. Fla.-born Petty passed away unexpectedly in October, but Asheville-based tribute band Somewhat Petty had already been playing his music around town for several months. Guitarist and leader Damon Goldman explains what about Petty’s music inspires him. “It’s timeless and it’s well-crafted,” he says. “It’s not complex, but it’s well-executed, and there are so many things [in Petty’s lyrics] that are relatable for the audience.”

The Orange Peel’s manager explains the thinking behind booking those acts. “Although our main mission is to present original artists, we find there is still demand for tributes. Turns out many of us are nostalgic,” he says. “Parents bring their kids who are open to taking in their parents’ music.”

Beyond groups purpose-built to pay homage to popular music heroes, Asheville has been home to several one-off tributes. Alarm Clock Conspiracy guitarist Ian Reardon has organized several such events in the last couple of years, including tributes to the music of John Lennon and Pink Floyd. “For a good six to nine months straight, I fully immerse myself in who that band is and what they were all about,” he says. “I look at it much like method acting.” He notes that mounting such events – coordinating the schedules and music for a large, rotating cast of local musicians – is a lot of work. “So I need to be passionate about the music.”

And passion – rather than financial gain – seems to be the driving force for the current crop of Asheville-based tribute bands. 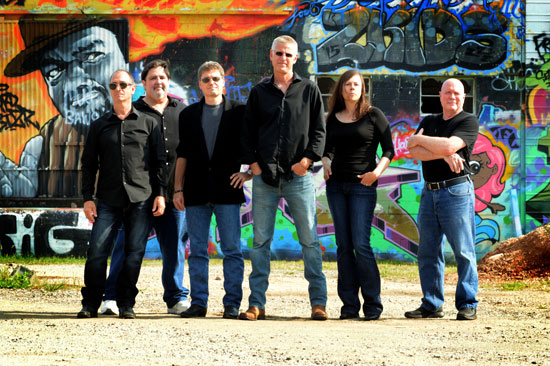 Southern Accents
In 2008, Damon Goldman moved his family from Florida to France. Because the move was only temporary, nearly all of the Goldmans’ possessions were in storage. The house where they stayed had a CD player with only three discs in it. “One of them was Petty’s 1993 Greatest Hits collection. “For three months,” he says with a laugh, “that’s all I listened to. And what was really funny is that I never got tired of it.”

Damon Goldman formed Somewhat Petty in late 2016; it grew out of his previous band, a cover group called the American Pieholes. Wham Bam Bowie Band drummer Jim Neu (who also plays in Who tribute band the Wholigans) encouraged Goldman to start the group after hearing him sing some of Petty’s tunes. “Your voice is very similar to Tom’s,” Neu told Goldman, “and I think it would be a good fit.”

The six-piece group finally came together in late 2016 and began playing locally shortly thereafter. Their profile was raised after Petty’s death, but they’re not capitalizing on it, instead playing dates close to home. Goldman’s goals remain modest. “We chose the name Somewhat Petty as a way of not setting the bar too high,” he says with a chuckle.