Virtuoso guitarist John McLaughlin is embarking on a farewell-to-the-USA tour, joined by Widespread Panic guitarist Jimmy Herring. Ahead of the tour, McLaughlin took the time to answer a few questions. 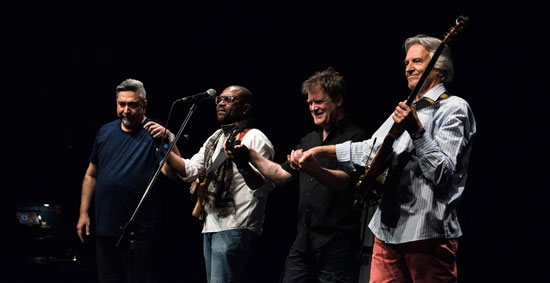 Bill Kopp: How did you get to know Jimmy Herring?

John McLaughlin: Listen, he’s playing my instrument! Anybody who’s playing my instrument and they get to a certain level, I find out about them. I’m his biggest fan, I think. He very graciously recorded one of my pieces; he just did this killer solo on it too. Really amazing. When I heard that solo I said, “Now why didn’t I play that song the way he recorded it?” He’s wonderful, and also he’s just a lovely person.

For the third set each night, both bands come out and play a set of music from your pioneering 1970s and ’80s fusion band, Mahavishnu Orchestra. Isn’t that music difficult to play?

Are you kidding? It’s very, very complex. But they’re all great players, in Jimmy’s band and our band. There’s a great vibe there, and we’re all very excited about the idea of playing new arrangements of these tunes.

Some guitarists make a point of overtly exploring the capabilities of synthesizer processing for their instrument, and others actively seek out to use those effects in the most subtle way. These days, where would you say you fall on the continuum?

In the Fourth Dimension, I don’t play any synthesizer guitar. Gary [Husband] is just a great synthesizer player, and I leave that to him; I just stay with the guitar. I haven’t used the synth guitar onstage since 2014 since I’ve been working most of the time with The Fourth Dimension. I have really been with electric guitar for the past four years now.

Fusion had its commercial peak in the seventies with the Mahavishnu Orchestra, Return to Forever, Weather Report, Eleventh House and a select few others. Do you consider what you do today to be fusion?

I never consider myself a fusion musician. Because if you want to look at fusion you’ve got to go back a few hundred years. Music and culture have been influencing other music and cultures for hundreds of years. Listen to Miles Davis’ Sketches of Spain from 1960, Miles Ahead‘s “Blues for Pablo” [1957], and you’ll hear him playing the blues with this Hispanic atmosphere. In the sixties to survive I was playing rock ‘n’, R&B, funk and James Brown. So it’s all of those influences. In Mahavishnu, the discipline was jazz but the influences come from The Beatles, from Miles, from Coltrane and even from free jazz.

Are you optimistic about the future of jazz?

There are some great musicians out there, don’t get me wrong. And frankly I listen to some jazz I hear today, and I’m saying, “What happened? Where’s the blood, where’s the passion, where’s the guts?” It’s just wishy-washy. It’s kind of wallpaper, and I feel sad. But I have great faith in human nature; I know that everything cycles around. Jazz will come back and it will explode again. I know it.

A much more in-depth feature based on other parts of this interview is HERE. — bk