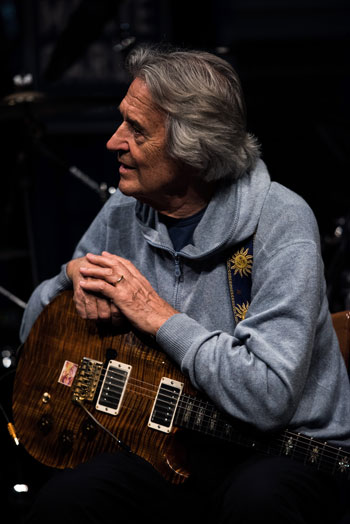 John McLaughlin is easily one of the most influential musicians ever to take up the guitar. His boundary-pushing, holistic approach to the instrument has earned him countless accolades. He has many high-profile fans among the legion of rock guitarists, though his own music only occasionally qualifies as rock. A key figure in the jazz fusion and world music movements, McLaughlin lent his considerable talents to important works by (and/or with) Tony Williams, Miles Davis, Larry Coryell, Carlos Santana, Al DiMeola and many others. And as leader of Mahavishnu Orchestra, John McLaughlin helped blur the lines between jazz and rock.

After a long and fruitful career (including 30-plus albums bearing his name, and scores of guest spots on other projects), McLaughlin is currently embarking on what was originally billed as a farewell to America; he’s since revealed that the 25-date “Meeting of the Spirits” tour with Jimmy Herring represents his final live performances.

“It’s my farewell tour, not just to America but basically everywhere,” McLaughlin says. The 75 year old musician explains that he’s developed arthritis, and the condition is worsening. “I’m feeling really good right now,” he notes. “Musically, I’ve never felt better. But I don’t want to put myself in a position to take a tour and find myself with a really, really ‘bad hair day’ and I’m not able to play; that’s a kind of a betrayal to myself and betrayal to the people who like the music. So this will be it,” he says.

The tour marks the first time McLaughlin and Herring have teamed up for a series of live dates, and McLaughlin is clearly excited at the prospect of sharing the stage with his fellow guitarist. “We’re very dear friends for awhile now,” he says. Each tour date will feature a full set by Jimmy Herring and the Invisible Whip (Herring’s solo project outside Widespread Panic), followed by a set from John McLaughlin and his band, The 4th Dimension. McLaughlin’s group features keyboardist Gary Husband, drummer Ranjit Barot, and bassist Étienne M’Bappé.

McLaughlin’s quartet recently released Live at Ronnie Scott‘s, a live set recorded at the famed and intimate London club. The album finds the band digging into McLaughlin’s deep back catalog, most notably “Miles Beyond” and other works originally performed with his pioneering fusion ensemble, Mahavishnu Orchestra.

And the tour with Herring leverages McLaughlin’s renewed interest in Mahavishnu Orchestra material. Citing Herring’s “personal affection for Mahavishnu music,” McLaughlin explains that the tour represents an opportunity to “bring all of that music back just to thank the American public for what a fantastic life I’ve had.” He calls the tour an expression of his “personal love and affection for America and American people.”

The British guitarist (he currently lives in France) has enjoyed a long relationship with American audiences. “It goes back to Miles Davis,” he says. McLaughlin played on Davis’ monumental Bitches Brew album, as well as the equally stunning but lesser-known Jack Johnson and several others of his albums. “But the big kind of explosion personally for me was in ’71 with the Mahavishnu Orchestra. And since then, it’s just hasn’t stopped.”

Mahavishnu Orchestra went through a number of lineups, but all included top players in jazz, rock and fusion. Violinists Jerry Goodman and Jean-Luc Ponty were members, as were keyboardists Jan Hammer, Gayle Moran and Mitchel Forman. The bass duties were ably handled in succession by Rick Laird, Ralphe Armstrong and Jonas Helborg. Powerhouse drummers Billy Cobham and Narada Michael Walden both served time in the group as well, as did saxophonist Bill Evans. The various lineups produced eight studio releases and a live album before disbanding for good near the end of the 1980s. 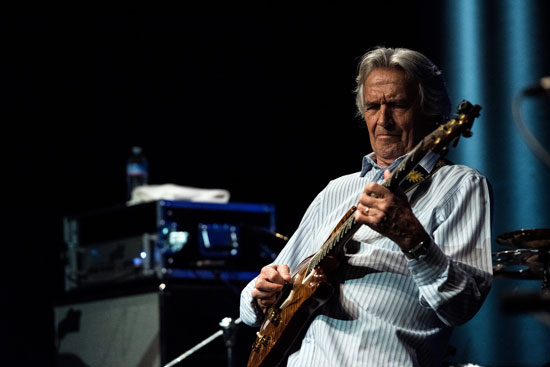 But the group’s popularity has endured. “A lot of people write to me about that band,” McLaughlin says. “It was a beautiful band; it was completely crazy, and really radical, but relevant until today. And it’s music that I love, and the fact that Jimmy is such a fan of that music.” So for the tour, after each of the two bands completes full sets, all of the musicians will return to the stage for a third set featuring the music of Mahavishnu Orchestra. “And that really excites me,” McLaughlin says, “because Jimmy’s such a player. And he’s going to be on my case; I don’t doubt that for a second!”

In keeping with the improvisational sensibility that’s central to the jazz aesthetic, the live versions of Mahavishnu classics aren’t likely to sound exactly like the studio releases. “I think all pieces of music have got a kind of life of their own,” McLaughlin says. Pausing a beat, he adds, “Okay, it’s a little outrageous to say a song is like a living being. But it’s got something mysterious and magical inside. When I play those tunes they take me into a special place, even after all these years.”

McLaughlin says that every time he plays one of those old tunes –some composed as much as 45 years ago – he gets something new from the experience. “It’s very hard to put into words, but it puts me in a particular place that goes back,” he says. “It’s kind of a time machine.” He makes the point that a great deal of the Mahavishnu Orchestra repertoire is extremely complex music. Fortunately, McLaughlin created a book of the arrangements back in 1973 and ’74. “If I hadn’t transcribed some of that stuff for the record,” he laughs, “we’d have to re-learn it!”

In conversation, McLaughlin reveals some of the tunes being rehearsed for the tour. He mentions “The Dance of Maya” from the group’s 1971 debut The Inner Mounting Flame, as well as “Eternity’s Breath” and “Lila’s Dance,” both from Visions of the Emerald Beyond (1975). The combined skills of The 4th Dimension and Herring’s Invisible Whip will tackle the challenging material. “We’ve got three drummers, and we’ve got three keyboard players,” McLaughlin says. “Ranjit [Barot] sings, And Jason Crosby, one of Jimmy’s keyboard players, plays great violin.”