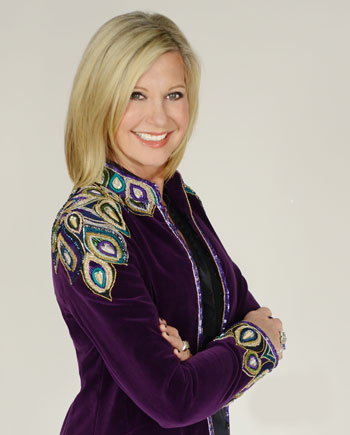 Olivia Newton-John has been a pop star for more than four decades. She got her professional start on Australian TV and radio, and cut her first single in 1966. Newton-John made a name for herself with the release of her first solo album, 1971’s If Not For You. On that record and several that followed, the singer established herself as a first-rate interpreter of other songwriters’ material. In the mid 1970s she scored a nearly unprecedented ten consecutive number-one singles on the Adult Contemporary chart.

She would go on to blockbuster success onscreen in 1978’s Grease, and achieved a kind of cult status with her role opposite Gene Kelly in 1980’s Xanadu. Following a bout with cancer in the 1990s, she placed greater emphasis upon recording more of her own songs. Newton-John now ranks as one of the most successful recording artists in history, with more than 100 million records sold.

Asked which of her many records is a favorite, Newton-John is initially nonplussed. “I’ve never really thought about it,” she says. “I don’t listen to my music, so I’ve never sat down and listened to a whole album.”

But after thinking for a moment about the 30-plus albums she has recorded and released, Newton-John names her 1994 album, Gaia: One Woman’s Journey. “That was the first album that I totally wrote and co-produced myself,” she recalls. “It was right after I had breast cancer for the first time, and it was very, very personal to me.”

Last year Newton-John released Liv On, a collaborative album with Texas-born Beth Nielsen-Chapman and Toronto-based Amy Sky. Focused on grief and healing, the project was inspired by the death of Newton-John’s sister Rona, who died from a brain tumor. “I wrote a song for her in her memory and sent it around to my friends and family,” Newton-John says. “They came back and said, ‘Oh, that’s lovely. Do you have any more songs like that?’”

Nielsen-Chapman had written a kind of grief anthem, “Sand and Water,” and Sky had recently lost her mother. “We all were in kind of a phase of understanding what this was about. Both wonderful songwriters – who are dear friends of mine – agreed to do it,” Newton-John says. “We recorded the album in Las Vegas when I was between shows.”

More recently, Newton-John released Friends for Christmas with Australian pop singer John Farnham; it’s Newton-John’s fourth holiday-themed album. “That’s always a fun thing to do; I love collaborating,” she says. “I like doing duets, and I like recording with other people.”

Newton-John was forced to suspend her tour earlier this year when she learned that her cancer had returned and spread. But now after a period of treatment, she’s energized and ready to return to the stage. “I’m really good,” she says.

“I love to sing, and I’m very lucky,” Newton-John says. “I’m grateful that people come to see me, and I’m lucky that I have so many hits I have to leave some out!”