Boogarins’ Soundtrack for the End of the World 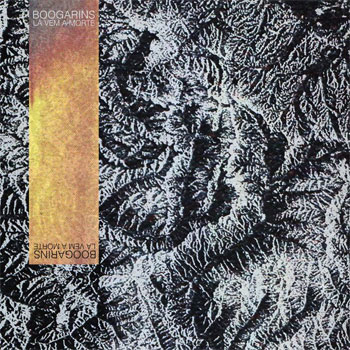 English language-speaking countries haven’t cornered the market for swirling, deeply textured psychedelic rock. Led by the multi-talented Gustav Estjes, Sweden’s Dungen has amassed a tidy catalog of boundary-pushing, progressive psych. Originally from Argentina and now based in Spain, Capsula makes heavy psychedelic power-trio rock. And from Brazil comes Boogarins, a quartet that spins out dizzying music that draws as much from prime-era Flaming Lips (circa The Soft Bulletin) and modern, glitchy trip-hop as it does from classic psych of the late 1960s.

Boogarins’ first album (As Plantas Que Curam, translated as “The Plants That Heal”) was released in 2013. A second full-length (Manual ou Guia Livre de Dissolução dos Sonhos, or “Manual or Free Guide to Dissolution of Dreams”) followed in 2015.

And in a previously-unannounced move, Boogarins released a third album, Lá Vem a Morte (“There Comes to Death”) just last month. Initially available digitally and on CD – and via streaming on boogarins.com – the album is scheduled for eventual release on vinyl as well. Lá Vem a Morte showcases the band’s trademark sound, one that’s equal parts gauzy and groove-focused, with a gentle air that still manages to rock.

Francisco “Dino” Almeida’s vocals are bathed in layers of reverb and echo, and Ynaiã Benthroldo’s drums are often supported by percussion loops. Working closely with those drums, Raphael Vaz’s bass guitar creates a heady, hypnotic underpinning for Boogarins’ soothing, swaying tunes. While the band’s sound isn’t overly steeped in Brazilian tropicalia, there’s nonetheless an exotic feel to many of the tracks on Lá Vem a Morte. And when the band does crank up the crunch – as on “Corredor Polonês” (“Polish Corridor”), mixed by Mitch Easter – the results are equally impressive.

The eight-song Lá Vem a Morte is anchored by the title song, split into three tracks spread across the album. Found sounds and piano textures work their way into the mix, creating an ambiance that’s occasionally redolent of late 1960s Pink Floyd. But the band’s South American roots distill Boogarins’ influences into something wholly unique and special.

Boogarins has toured the U.S. before, first visiting the Southeast in early 2014. The band’s live show focuses on the music: the Portuguese vocals won’t be intelligible to most American listeners, but the vibe of the Lá Vem a Morte songs comes through loud and clear. There’s a sense of confusion, alienation, loss and resignation, but it’s all leavened by a glimmer of hope.

As Almeida writes on the band’s website, “These songs are a reflection of the lack of sensibility in which we live. Maybe it’s time to be strong, throw away the hypocrisy and face the bad and the good feelings at once … and find some deep truth besides the infinite superficiality of our days.” Even if the future of the planet doesn’t look too good right now, thanks to Boogarins the present has an appealing soundtrack.