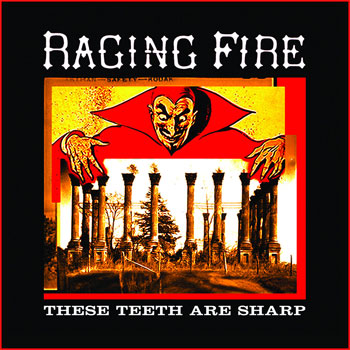 File next to: X, Lone Justice

After toiling in relative obscurity though the 1980s, Nashville country-punkers Raging Fire threw in the towel. But the under-appreciated quarter left behind some superb music; that material was eventually reissued in 2015 as Everything is Roses. Positive response to that collection led to a full-scale reunion, and the fruit of that is These Teeth Are Sharp. Showing that the quintet has lost none of its, er, fire, the album features Melora’s Zaner’s distinctive vocals, backed by barbed-wire, slashing rock ‘n’ roll with just the right amount of twang. A rock sensibility – in the form of speedy yet brief guitar solos, memorable riffage and pummeling tempos – is balanced by a modern rethink of the classic country lyrical approach. Rock listeners who think they don’t like their music with a bit of Nashville flavor are encouraged to spin These Teeth are Sharp and then reconsider their preconceptions.