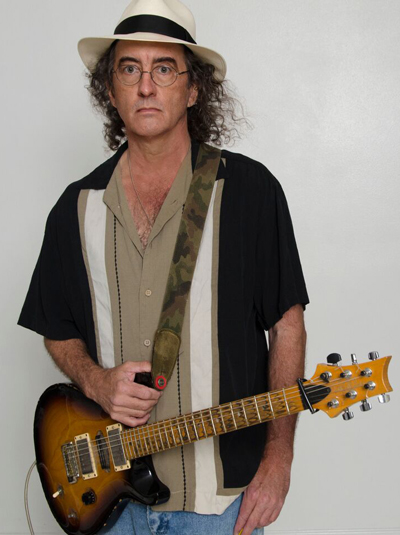 Many of the songs on James McMurtry‘s albums feel like vignettes from larger stories. The listener can feel that he or she is coming in on the middle of the story. If he wanted to, McMurtry could probably revisit his songs’ characters at other points in their lives, creating yet more compelling stories.

“Basically, it never occurred to me to do that.” he chuckles. “But that might be a good tactic for me when I need to get another song written.” But so far – across more than a dozen albums – the Austin-based singer-songwriter has never had any trouble coming up with new tunes.

“I start with a couple of lines and a melody,” McMurtry tells CP. “I hear that, and I think, ‘Who said it?’ Maybe I can get a character from that, somebody who once said those lines. Then I can work backward from there and get a story.” There’s often a sense of world-weariness, melancholy and regret in his drawn-from-life songs, and that remains true on his latest album, Complicated Game. “Most of the people I know are struggling in one fashion or another,” McMurtry says. “And that’s just part of life.”

Even though McMurtry’s lyrics are a strong component of his music, he differs from many singer-songwriters in that he doesn’t view his music primarily as a vehicle for his words. “The last three or four records before Complicated Game were pretty much riff-rock; there’s a lot more electric guitar on those,” he says. For him, the album as a whole is “mostly about vibe and groove; It’s about dynamic flow. I don’t think much about thematic flow.”

McMurtry released his first album in 1989 and had been performing for years before that; his current run of concert dates is billed as the “Back At It” tour. As a longtime touring musician, he has seen a lot of changes in the music business. Back before Napster and Spotify,” he observes, “we toured to promote record sales. Now we make records to promote tour dates.” So does he think things are tougher for a musician today than decades ago?

It really hasn’t changed my life, because [making music] is what I was doing anyway,” McMurtry says. Then as now, standard industry recording contracts place the expenses associated with making a record upon the artist; those costs are charged before paying anything to the musician. “My early records on Columbia didn’t recoup, so I never saw the back-end on those records,” he says.

I was just making it on the road,” McMurtry recalls. “There was a brief time, right about 2006 or so, when Childish Things was out: “We Can’t Make it Here” kinda rang the bell in Americana with that one.” That topical song was named the best song of the decade by noted music critic Robert Christgau. “It was cheap enough to make, and sold enough to recoup, so I did get some back-end mailbox money off of that.”

These days McMurtry records for his own label, Complicated Game Records. After a string of self-produced albums, for his latest, McMurtry handed the reins over to outside producers. “I had gotten tired of producing myself,” he admits. “I ran out of tricks; I felt I was starting to repeat myself. I thought it was time to bring in new blood, so I got C.C. Adcock and Mike Napolitano. They have a much different approach.”

In the past, McMurtry’s tried-and-true method of making a record has been straightforward: “When I track, I usually get the band in a room. We do a few takes, and we pick the take that has the most life in it and start overdubbing on that. Whereas this record is all overdubs.”

What that meant in practice is that for the Complicated Game sessions, McMurtry would begin by cutting a basic guitar and vocal part for a song. Then those parts would be replaced with more refined takes, bit by bit. “And then we’d work from there,” McMurtry says. “We’d think, ‘Okay, do we want to put drums on this?’ He describes Complicated Game as “more of a ‘sound painting’ than the rest of my records.”

Overdubs for the sessions often took place when McMurtry wasn’t even around. “I guess I was going off on the road somewhere when Benmont Tench [Tom Petty and the Heartbreakers] recorded in New Orleans,” McMurtry says. The producers “kidnapped him and got him in there to play keyboards. I guess Ivan Neville did that Moog bass [on ‘These Things’]; I was gone for that. I would come in, play a few tracks with vocal and guitar, and then I’d have to get in the van and go make some money.”

Current publicity photos show a James McMurtry quite different from the one fans have seen these last few decades. “I got tired of the beard,” he chuckles. “Every ten or fifteen years, I shave it off and start over. I got a buzz cut to go with the shave. I’m growing the goatee and the mustache back, so when I go to Canada in July, they’ll let me back in this country. I don’t want to look too unlike my passport picture, which of course looks like I just got out of jail. By the time I get to Pittsburgh, I won’t look quite like I did at that photo session.”