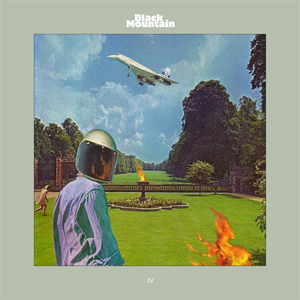 Conventional wisdom holds that Vancouver-based Black Mountain is somehow retro in its approach to making music. A more careful listen, however, suggests that the band’s music features new sounds that are informed by (but not copies of) the heavy sounds of 1970s rock.

But on their latest album (and first in nearly six years), IV, the group adds keyboard textures that may remind some listeners of a different decade: the 1980s. “I guess I’d agree about that,” says Jeremy Schmidt, the group’s keyboardist and a founding member. “It wasn’t really a conscious decision, though. Or at least not a premeditated one. Usually the way that things get done by us is not specifically thought about much beforehand; we sort of follow things as they develop.”

Schmidt cops to the group’s influences, but doesn’t believe that the group apes those in their own original music. “We like a lot of music from the ’70s and ’80s; that’s when we were doing a lot of our growing up and listening to the radio in our parents’ cars. We were just exposed to what was part of the vernacular of the time, and it sort of embedded itself in our psyche. And then it comes out later on when we’re choosing to make things.”

One well from which Black Mountain draws inspiration is the relatively unknown (in the USA, anyway) genre known as krautrock. “I’d say that krautrock is a kind of parallel universe to classic rock,” says Schmidt, “one that you don’t even know exists until you become a fan of music and start to dig past the surface to discover groups like Amon Düül II, La Düsseldorf, and Hawkwind. (That last one – featuring the recently departed Lemmy – wasn’t kraurock, but they often made music in the style).

“I remember when I came into all that stuff,” Schmidt says. “I worked in a record store at the time when CD reissues really started to get going. Before that, I knew that I liked stuff like Tangerine Dream, but I guess they were a little better-known in America and the UK, being on Virgin Records. The other stuff I discovered over the years; all of us did, I think. And now it’s the genre that’s closest to my heart; it’s so innate to my musical identity, and that part of the band, too.” He likens krautrock’s influence on Black Mountain to “what Led Zeppelin is to other rock bands.”

That 1970s aesthetic does apply in one key component of the group’s sound: their gear. “Most of the gear we use is several decades old,” says Schmidt. “I use a Mellotron a lot on the record, but live I have a sort of digital version of one called a Memotron.” Onstage he also uses a vintage 1981 Moog Source synthesizer “and an old organ.” Schmidt goes on to run down the rest of the band’s onstage gear; it’s a long list of brand names familiar to anyone who’s followed rock of the 1960s and ’70s. “We do use mostly the older gear live, but we’re not going to take a Hammond organ or a Mellotron on tour; they’re just too delicate.”

Schmidt allows that “we do have to deal with old gear rearing its unreliable head every now and then. The synthesizers get a little ‘tuney,’ and some things break down a little bit, but they’re really intrinsic to the sound of the band, so we make the effort to drag some of it around.” He does make some concessions to modernity, however: he raves about “this little Waldorf string synthesizer that’s an entirely digital sound engine. It emulates vintage string machines. It sounds good, a lot like the [1974] ARP Solina. And it’s a much smaller thing; it’s like bringing a pedal around.”

During the time between the end of the group’s tour in support of 2010’s Wilderness Heart and sessions for IV, the individual members stayed busy with various solo projects. Schmidt believes those outside pursuits are part of the key to the group’s longevity. “All of our other things that we do inform – on some level – what the band does as a collective whole,” he says. “It’s all quite different, and might not immediately resemble Black Mountain, but all those elements are in there. They’re part of the mix.”

That mix results in songs that can take the listener on a sonic journey. “We all do like a lot of music that has dynamic shifts built into it, or that has a kind of narrative arc,” Schmidt says. “We often move around a bit within a song, and within an album, too. We like to have shifts that might not be obvious. Doing things that way comes naturally to us. There are just so many different approaches to making music that we’ve absorbed over the years that end up emerging when the time comes to write songs.”

After returning from a European tour in April that took them through France, the UK and Benelux, Black Mountain kicked off a North American tour in the Pacific Northwest. The band has booked dates through July, ending up in Ontario.