Five Years in the Wilderness: The Return of Black Mountain

Nearly six years elapsed between Vancouver-based Black Mountain‘s 2011 album Wilderness Heart and their latest, the straightforwardly-named IV (like all their, albums, released on Jagjaguwar). “We sort of cautiously took a bit of a break from the band,” says keyboard player Jeremy Schmidt. “We had done a lot of touring after Wilderness Heart came out; we had been pretty much full-time recording and touring. We’d been doing it for a good many years, and we felt we needed a breather.”

It’s not as if the band members were idle, though. Each was involved in at least one other musical pursuit during the extended hiatus. “We were all champing at the bit to get some of those projects done,” Schmidt says. “Between the five of us, we’ve probably released about five records in the last five years; they just weren’t Black Mountain records.” He points out that some of those other bands mounted tours of their own, too. “Five years goes by pretty quickly when all that is going on,” he chuckles. 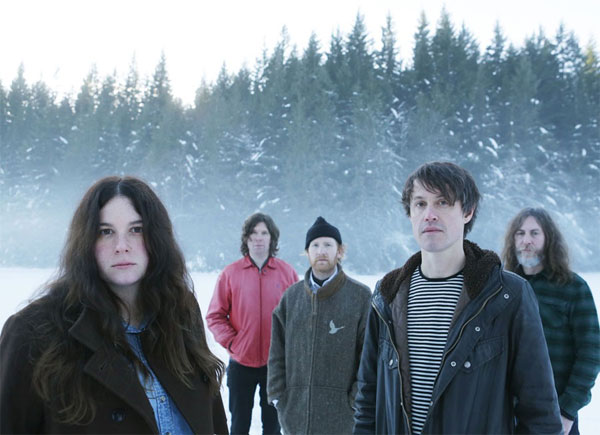 Add to all that another challenge in crafting a follow-up to Wilderness Heart: “We also don’t all live in the same city, so there’s that,” Schmidt says. “There has to me more forethought in coordinating things just so we can get together to work on stuff.” The group also parted ways with bass player (and to date the only original member to leave the group) Matt Camirand. “And that all takes time, too,” says Schmidt.” The group recently added bassist Brad Truax, veteran of many recording sessions and formerly/briefly of Interpol.

The group rallied to create IV, released April 1. Highlighted by the lead vocals of Amber Webber and Stephen McBean, the group’s signature space/stoner-rock vibe is largely intact. But IV features song structures that are a bit compact when compared to some of the more sprawling epics found on 2008’s In the Future and the group’s self-titled 2005 debut. The new disc’s “Cemetery Breeding” is perhaps the catchiest track ever associated with Black Mountain; the five-piece successfully transform riffs into hooks. And the song is emblematic of an album that – in its own way – offers more sonic variety than has been heard on a Black Mountain album before now.

As always, the group charts its own sonic path. “I don’t recall a time when we ever felt any constraint, any pressure to conform to somebody’s idea of what the band should be,” says Schmidt. “We’ve always not paid much attention to that type of voice, if we’re even hearing it at all. We just do things as we see fit at the time, without much thought to how it might be perceived or thought about in the grand scheme of things.” He laughs and adds, “That’s the job of other people to sort out.”

Onstage and on record, Black Mountain keeps the focus squarely on the music. “I’d say that we’ve honed our live sound a little bit over the years, but I wouldn’t say that we’re a polished machine or anything like that,” says Schmidt. “I feel like we’ve gotten better as the years have gone by, just by playing together and spending time together.”

“But it’s not as if we’ve added a whole bunch of theatrics or pyrotechnics; it’s still more or less just the group playing onstage with very minimal smoke-and-mirrors. The rest,” Schmidt says, “is just playing the songs.”

An edited version of this feature appeared previously in the Colorado Springs Independent.