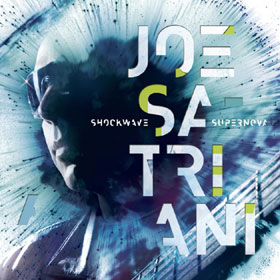 A big part of what has always made the music of Joe Satriani stand out among contemporaries is the guitarist’s inerrant sense of melody. While other shredders rely on technique and speed, Satriani employs those qualities in service of rock-solid songwriting. And though he can actually sing (he provided backing vocal on Crowded House‘s debut album, of all things), Satriani has long since made the decision to let the music do the talking. That his instrumental songs still manage to sounds like they’re “about something” is a testament to his skill as composer and arranger. His fleet-fingered, constant soloing is the “lead vocal” of his albums, but the arrangements allow the other players’ work room to breathe. There may not be anything on Shockwave Supernova quite as timeless as the Grammy-nominated “Always With Me, Always With You,” but that’s a near impossible standard to apply. Soaring, expressive guitar work abounds.