Home  »  garage • interview • new release • psych   »   The Chocolate Watchband: Give the People What They Want (Part 2)

The Chocolate Watchband: Give the People What They Want (Part 2)

Chocolate Watchband guitarist Tim Abbott believes that these new versions of the band’s old songs are an “opportunity for us to rewrite history, to make it right.” Because any way you slice it, Richard Polodor‘s “Expo 2000” which leads off the new disc, is a pretty ace psychedelic instrumental, well worth revisiting.

And there was another compelling reason for the re-formed Watchband to record these songs: “None of these songs were on iTunes,” Abbott points out. “They weren’t available to the fans. Universal [Music Group] had control of it.” The band initially released the tracks independently under the title Revolutions Reinvented, and – interestingly enough – right as those versions hit iTunes, Universal decided it was the right time, finally, to make the original versions available, too. “Pretty much par for record companies,” Abbott observes ruefully. 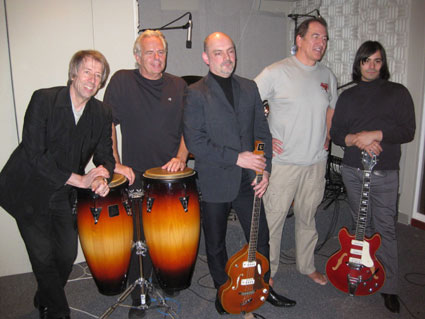 But ultimately, all of the songs featured on I’m Not Like Everybody Else have been staples of the modern-day band’s set list for quite some time. “We’ve been doing these tunes since 1999,” says Abbott. Back then, vocalist David Aguilar rang up Abbott, told him that there was renewed interest in the band, and suggested they get things going again. Their first gig was in San Diego. “The promoter basically paid us to put the band back together,” laughs Abbott. Fans came from all over – as far as Europe – to see the revived Watchband play live. The band were surprised at the positive reception they got. “I knew something was going on,” recalls Abbott, “but I didn’t realize to what extent. When we finished the show, a guy came up to us and said, ‘I want to bring you guys to New York to do a live show. And we want to record it.’ And then another guy said, ‘We want to take you to Rome.’” And all those things did indeed come to pass.

In the wake of that success, The Chocolate Watchband recorded an album of new material. But Abbott admits that “fans didn’t really embrace” it. He concedes that the band “weren’t thinking about our direction; we just made music.” And while the music may have been worthwhile – the band’s current website pointedly makes only the briefest mention of its existence – it didn’t sound at all like the Watchband of old. And that’s what fans want. As Allmusic‘s Bruce Eder wrote in his measured review of Get Away, “coming off of a 32-year layoff from music, do you try to sound like who you were, which is to say, as people remember you, or who you are?” Abbott contends that the material was good, and suggests that the band might revisit and re-record the songs in a style more akin to their signature sound.

That’s what they did – very successfully – for I’m Not Like Everybody Else. “We had an experience in New York,” Abbott says, “where we brought some of our updated-sounding stuff. And what we found was that our fan base just rejected it. We had done our show, and when we came back for an encore, we did new music. And that was the worst possible thing we could have done! We didn’t know, but it was very educational.” He laughs as he recalls something David Aguilar said to him one night, post-show, after running through a set of the Watchband’s best-loved – “genuine” or not – songs. “We should have done these songs back then. They’re good!”

The new album takes its title from a Watchband cover of the classic Kinks song. But the lesson that The Chocolate Watchband learned happens to be the title of a later Kinks album: Give the People What They Want. Abbott observes, “a lot of bands get to evolve. The Beatles: you watched them evolve. There was an evolution of the style, the sound. But we don’t have that privilege, because we basically dropped out, and then we came back. And so our fan base wants The Chocolate Watchband that they love. They don’t want it changed. They don’t want it updated; they don’t want me to shred on guitar. They want to hear it in that style; that’s why they like it.”

Original bassist Bill “Flo” Flores is featured on the album, but had to retire shortly thereafter for health reasons. Music journalist/author Alec Palao is the group’s official historian, and he advises the group as well. Some of his most well-regarded advice: “Make it sound correct: make it sound vintage.” So both live onstage and in studio recordings, that’s what The Chocolate Watchband does. Abbott smiles when he cites a Belgian reviewer’s concert writeup: “For just a moment, I felt as if I was 17 years old, at the Fillmore Auditorium watching one of my favorite bands in the world.”

One of the other heroes of the 60s garage/psych era is The Seeds. That group’s keyboard player, Daryl Hooper, has now joined the Watchband for live dates and recording. “We have another album in the can,” says Abbott, “and we’re probably going to finish it in the fall.” Hooper is on the disc, playing both keyboards and guitar.

Based on the band’s early recorded legacy, they’re often thought of as major Rolling Stones acolytes. Not so, says Abbott. “We were kind of a blues-influenced band,” he says, noting that the only song from their albums that ever found its way into their live sets in the 60s was “I’m Not Like Everybody Else.” So oddly enough, today’s Chocolate Watchband doesn’t really sound like the vintage band at all. At least not like the vintage band when they played live. “We did a lot of Chicago bluesy kind of things,” Abbott says. Flores and he “were influenced by James Brown and soul. And Gary [Andrijasevich, drummer] had a jazz background. David was an artist. And Mark, who I replaced, was really into Jorma Kaukonen from The Jefferson Airplane.” Not to put too fine of a point on it, but as Abbott says, “the live Chocolate Watchband was nothing like the records.” He laughs and adds, “It is now.”