Home  »  garage • interview • new release • psych   »   The Chocolate Watchband: Give the People What They Want (Part 1)

The Chocolate Watchband: Give the People What They Want (Part 1) 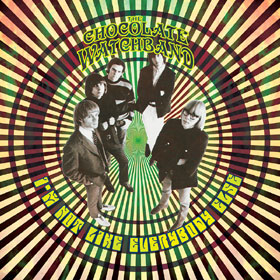 Among aficionados of 1960s garage and psychedelic music, The Chocolate Watchband is dearly loved. Though the band’s history is – even by the standards of that era – a mightily convoluted one, the band (and its ersatz versions; more on that subject shortly) left behind some durable music that captures the 1960s zeitgeist.

In many ways, the story of San Jose, California-based The Chocolate Watchband is typical of its time. Richie Unterberger‘s chapter on the band in his 1998 book Unknown Legends of Rock ‘n’ Roll is highly recommended; suffice to say that the story is too complicated to recount here. The short version is that while the band recorded a number of excellent sides, producer Ed Cobb (and engineer Richie Polodor) brought in studio musicians to cut additional tunes, ones that the “real” band had nothing to do with. Complicating matters for those who value so-called “authenticity,” some of those not-really-Watchband tracks are very good-to-excellent.

In 2015, many might look back with bemusement (not to mention ridicule) upon 60s bands with “silly” names: Electric Prunes, Peanut Butter Conspiracy, Vanilla Fudge, Strawberry Alarm Clock…you get the idea. It should be noted that these weren’t comedy bands in any sense of the term; no, they were often as deadly serious as, say, Love and The Doors. And while the Watchband didn’t score any megahits along the lines of the Alarm Clock’s “Incense and Peppermints” (which featured a lead vocal by a guy who wasn’t even in the group, but that’s yet another story), they created some excellent music.

Oddly enough, The Watchband have some connections to The Grateful Dead. Prior to joining the Watchband, guitarist Tim Abbott played in a band that sometimes featured drummer Bill Kreutzmann “Our regular drummer was a ski bum, and he used to desert us all the time,” Abbott chuckles. “In college, I played with Mickey Hart in The Five of Harts, his band. And I knew Bob Weir; he used to come down to The Chocolate Watchband’s cabin in Los Gatos. One time, in 1967, he brought along what might have been the very first wireless guitar rig, a prototype. And Jerry Garcia helped me get one of my favorite guitars; he worked at a music store.”

Abbott recalls the circumstances of his most memorable Chocolate Watchband concert date of the 1960s. It also happens to have been his first one. “Mark [Loomis] had left the band, and there were a lot of bookings left. They called me in on a Wednesday afternoon: ‘Tim, we’ve got a gig Saturday.’ We rehearsed all the way from Wednesday all the way up to Friday night. Almost without sleeping. Saturday morning, we jumped into the manager’s Lincoln and then, off to Mt. Tamalpais [just north of San Francisco] for the Mount Tam Fantasy Fair.” That festival drew more than 36,000 people on June 10-11, 1967, and featured an eclectic lineup that included Dionne Warwick, The Doors, Tim Buckley, The Byrds, The Merry-Go-Round (with Emitt Rhodes) and many others. “I walked out onstage,” Abbott remembers, “and I thought, ‘this is cool.’” 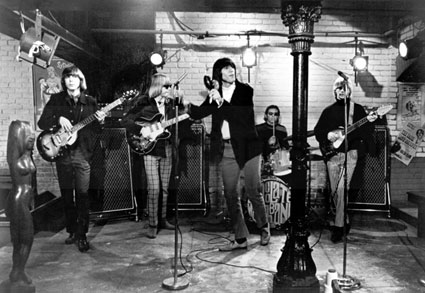 But that wasn’t all. “When we finished our set, the manager for The Fifth Dimension walked over to me and said, ‘Our guitar player didn’t make it. The band really like the way you played. They want to know if you’d substitute.’ I said yes.” He went over and met the band, and was all set to play with them. “I asked, ‘Do you guys have any charts?’ They said yes and opened their book for me.” He pauses for emphasis. “Not a chord in sight! All written out, ‘golf clubs on fences.’ And I hadn’t sight-read in years. I mean, I could sight read, but not in front of that many people! I asked them, ‘Don’t you have anything with chords on it?’ They said, ‘No, this is what we have.’ Those were studio charts for seasoned studio guys.” Abbott had to bow out, but he still has fond memories of the festival.

Modern-day listeners may know The Chocolate Watchband best through their inclusion on the Nuggets compilations. The original 1972 double LP featured “Let’s Talk About Girls,” an aggressive, macho Rolling Stones-flavored rocker. But when Nuggets was expanded to four CDs in 1998, the band scored two more inclusions: “Sweet Young Thing” (not the Monkees‘ tune) and the immortal “Are You Gonna Be There (At the Love-in),” which had been featured in the 1967 teen exploitation film Riot on Sunset Strip.

In the group’s (again, convoluted) heyday, they released three LPs – 1967’s No Way Out, The Inner Mystique in 1968, and 1969’s One Step Beyond – all of which command extremely high prices on today’s collector’s market. And all three feature a mix of originals, covers, actual-group performances, and recordings made without the band’s knowledge or involvement. Their time apparently having passed, The Chocolate Watchband broke up in 1970.

Fast forward more than thirty years. With the renewal of interest in all things garage-psych – thanks in no small part to the aforementioned Nuggets reissue – four key members of the 60s era band reunited and began to play live dates. Various compilations and live discs followed, and eventually the group entered the studio to record a new album. Now available as I’m Not Like Everybody Else, that disc collects thirteen tracks from the band’s history, in newly-recorded (but faithful) versions.

“There were a couple of things that were on our minds,” explains Abbott. Acknowledging that some of the songs weren’t recorded by band members – much less played live at concert dates back then – he says, “There were a few times when the band got to do what it does, but not often. Not to the extent we wanted to. David [Aguilar, lead vocalist] was replaced by a studio guy, and then they took pieces of what we had done, and built new songs out of them.”

“The record companies back then were in complete control,” Abbott says. Understandably, the band wasn’t happy to learn their record label was passing off songs written and performed by others as the Chocolate Watchband. “The band hated ’em. I remember using those records for target practice,” Abbott says with a chuckle. “And when those albums started going for two, three and four hundred dollars apiece, I started thinking, ‘Oh my god. What have we done?’”