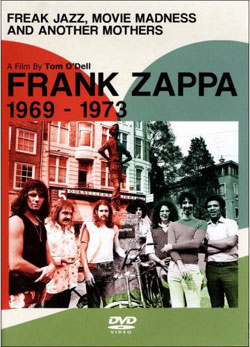 The back catalog of Frank Zappa is massive, and massively intimating. Never the most commercially-minded of artists, the virtuoso Zappa recorded and released more than fifty albums during his lifetime. (His estate has more than doubled his catalog, with all manner of posthumous releases; his so-called “100th album” is due out soon.) With albums that explored everything from doo-wop to fusion, from big band jazz to musique concrète – not to mention a lot of scatological lyrical content – Zappa’s oeurve could easily scare off (or even repel) the casual listener.

None of which seemed to bother him in the least. Zappa was a restless innovator, and what that often meant in practical terms is that he’d make what could seem (especially at the time) as one musical left-turn after another. Just when you’ve gotten used to the early Mothers records, exemplified by We’re Only in it For the Money, Zappa fires the entire band and makes a weird orchestral album (Lumpy Gravy) and then a blues/jazz LP (Hot Rats).

To make dealing with his vast catalog a bit easier, fans, critics and the like have attempted to divide Zappa’s work – his so-called “project/object” – into eras. There’s certainly overlap between some of those era – his work doesn’t lend itself to neat classification – but it’s a worthy endeavor to break Zappa’s music into more easily-digestible pieces.

And the piece that remains most controversial among his fans is what one might call the Flo and Eddie years. From around 1970 until 1971, Zappa’s band was fronted by a pair of vocalists who – for contractual reasons – called themselves The Phlorescent Leech and Eddie. Better known as Mark Volman and Howard Kaylan, the duo had come to fame as the front men of The Turtles. The Turtles were always known for their sense of humor and lively stage personae, so on some level, they were a good fit for Zappa. Enlisting top-notch musicians who were able to play the increasingly complicated music that he was composing, Zappa brought Flo and Eddie on board to handle vocals, a task that was not among the strongest qualities of the original Mothers.

Taking a detailed and incisive look at this period requires backing up a bit to provide proper context. And that is why the new documentary Freak Jazz, Movie Madness and Another Mothers covers the period 1969-1973. Beginning with a quick history of the Mothers up to the start of that era, the lengthy (more than two hours) documentary seeks to put the work of the Flo and Eddie period into its proper historical perspective.

Another in the long series of music documentary DVDs from the Sexy Intellectual team, Freak Jazz relies on true experts to weave its narrative. Some of these are faces familiar to those who’ve screened other documentaries from the team: Zappa biographer Billy James and Mojo Magazine‘s Mark Paytress weigh in with their own informed perspectives. And a number of players and Zappa associates from that era provide their own accounts: Ian Underwood, Jeff Simmons, Aynsley Dunbar, and (most notably) the late George Duke all get a good amount of screen time to tell their stories.

Two hours and forty minutes might seem like a long time, but it breezes by when watching Freak Jazz. The knotty twists and turns that Zappa’s music, band and personal life took during this period require a good bit of explaining, and this DVD does just that in an exceedingly expert fashion. The filmmakers rightly hold Zappa’s work to a high standard, and the onscreen commenters are unafraid to criticize what they see as ill-advised (say, “Billy the Mountain”) or just plain lousy musical output.

A good amount of time is spent discussing the film 200 Motels, and while there are very few clips from the actual movie (likely due to licensing issues), some behind-the-scenes footage helps tell the story. And while Howard Kaylan isn’t involved in the documentary, Mark Volman provides the Flo and Eddie perspective. Rarely-seen photos and onstage footage make Freak Jazz essential for the hardcore Zappaphile, but the conversational tone of the DVD makes it recommended viewing for even the most casual Zappa fan.