The members of Double Naught Spy Car don’t seem put off by the genre labels that (cough, cough) certain rock writers tend to apply to musical artists. In fact they’ve offered up a label of their own to describe their sound: “spaghetti/jazz/prog/surf/twang.” Now, if that doesn’t confuse listeners, their music just might. On their latest album Panorama City, the southern California quintet are joined by singer/lyricist Stew, formerly of equally-though-differently-quirky group The Negro Problem.

The project that gave rise to Panorama City started its life more than a decade ago, the product of a grant from the American Composers’ Forum. The resulting tapes languished for years, but now they’re available in both edited album form and in their raw, largely unaltered state.

I spoke with guitarist Paul Lacques about the development of the grant-financed sessions into a finished product that is decidedly avant-garde, yet somehow still accessible. And I’m also pleased to present a Musoscribe World Premiere in advance of Panorama City‘s April 14 release: the track “Bumpin’ Morton Subotnick” (see link below).

Bill Kopp: The nature of improvisation is that you free yourself from preconceptions as to where you’re going with the music. I understand that’s how a lot of late ’60s and early ’70s Miles Davis sessions were done. But then Teo Macero and Miles would splice, chop, edit, and reassemble the results into something they liked. Frank Zappa did something conceptually related: he’d take tapes of his live guitar solos, extract them from the multitracks and then craft new studio backing around them. To what extent did you engage in post-recording “sculpting” of these tracks?

Paul Lacques: Our bass player Marc Doten did the lion’s share of it. For example, if we had a seventeen-minute song, we needed to trim it down to four and a half minutes or so, maybe six minutes. So eleven minutes vanish right there. I think he moved a few things around, but the general flow is somewhat how we played it, but with big sections chopped out. 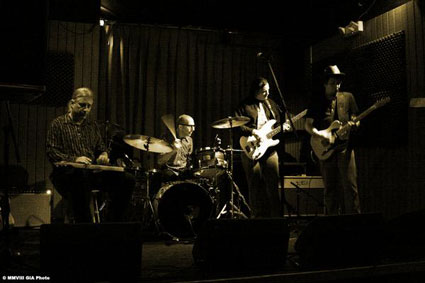 I think, as we were doing it, we had in our minds, “Maybe we’ll chop this up someday.” I don’t know; it really was leaping into the unknown when we started doing it. We didn’t really even talk about it. We just wrote this grant [proposal], promising to make songs up on the spot. Those were sort of broad instructions. But we actually did do it; one of us would just start playing, and the others would just fall in. The rule of improv is that you don’t leave your partner hanging.

So we did that. Somebody starts with a crazy drum or guitar lick, and we would literally follow along, thinking, “Oh, that’s how the song goes, okay? Well, then my part should go like this…” And then Stew would come in – sometimes right away, sometimes he’d wait five minutes – with some lyrics he had scrawled that morning or the day before. He’d go looking through his notebook for something that might match the groove. And then when it started sounding like music, he’d start singing. There were literally no second takes.

But to get back to your question about shifting order, it’s about 75% in the order we played it, with sections moved around.

BK: So did you do things like pulling the fader down on one of the guitars, taking things out of the mix?

PL: Oh, yeah. Sure. And you can hear it, where one guitar is very low in the mix. Because we didn’t have isolation, you’ll still hear it a little bit, but we definitely did some post-recording arranging with faders. There was a fair amount of manipulation done to the original tracks.

BK: I couldn’t help but notice that the press release that accompanied Panorama City seemed to go out of its way not to mention Captain Beefheart. Within my musical frame of reference, the music of Beefheart is the closest thing to what you’re doing on this album. Do you consider him an influence, and if so, in what ways?

PL: I agree. “Beefheartian” is the number one adjective that I would use. But the process we used was the opposite of what Beefheart did. I think he basically had a slave shop going, where he’d make his players learn his crazy parts absolutely verbatim. And they’d rehearse them until people were ready to run out of the desert shack and take their chances.

But that was very much the opposite of what we did. Still, it does sound like some Captain Beefheart stuff. Especially the guitars; there’s some really angular guitar playing and tone.

We were heavily influenced by Beefheart when we were growing up; all five of us. So I would embrace that influence, certainly. And I do hear the similarity in sound, sometimes.