Book Review: Who Did it First? 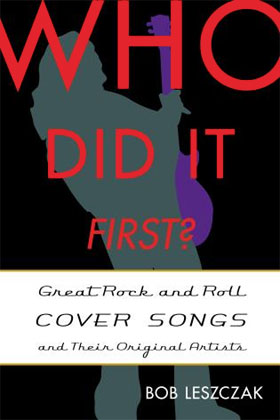 Have you ever wandered into (or been drawn into) a conversation with a trivia master? Not to make outsized claims, but by some measures, I’m one of those guys. Many years ago – not long after the game Trivial Pursuit took off – I received as a gift a board game called Rock Trivia. But the problem was, no one would play the damn game with me. Even at that age (early 20s) I could spot mistakes in the answers printed on the cards. “Who first recorded the hit song ‘(I’m Not Your) Stepping Stone?” Well, I’d answer, of course it was Paul Revere and the Raiders! The Monkees version came very soon thereafter. But of course the card read, “The Monkees.” I’m told it was no fun to play with me, as I would invariably contest the answers, heading to my bookshelf to provide substantiation for my own (“officially” wrong) response.

Happily, I’m much less insufferable now. No, really, I am. A few years ago I was involved for awhile with a group of people who gathered weekly to play Quizzo, a beer bar version of trivia. I served as the music and pop culture guy, the one to call upon when questions related to “dad rock” and whatnot came up. Luckily there were other team members who knew about subjects such as professional sports; my knowledge of (and interest in) such things is laughably negligible.

But my love of the minutiae of rock history remains. I can’t quote deadwax matrix numbers, but I know a good bit of music pop culture. And I’m always on the lookout for more. So I was pleased to discover a new book called Who Did it First? Great Rock and Roll Cover Songs and Their Original Artists. Across more than 250 pages, author (and well-known radio deejay) Bob Leszczak takes readers on a trip through time, covering (ha) several hundred well-known songs.

For each tune, Leszczak provides some basic information, clearly formatted: the composer, original artist, a cover artist, year of release, and chart positions (where there are any). Some of his listings are pretty obvious, ones that nearly any casual pop music fan could rattle off: Van Halen‘s cover of Roy Orbison‘s “Oh! Pretty Woman” is a good example of the obvious cover.

But there are plenty of less well-known examples, and in more than a few cases, the cover versions are worth seeking out. Also, there’s the reverse scenario, wherein the original wasn’t all that monster of a hit, but the cover scored on the charts. And there are a few ringer, examples where some unimaginative artist cut a whole album of covers (Rod Stewart, Elton John and some country artist whose name I’ve happily forgotten, I’m looking at you). Those covers serve as space-filling examples in a book that doesn’t need padding. There’s so much worthwhile and interesting material to discuss.

The author’s breezy alphabetical-order run through several hundred songs is trivia-filled and entertaining. And by its very nature, Who Did it First? Is the sort of book one can work through in small bites. It’s chock full of information, presented in a clear, concise and informative fashion.

Leszczak left out a few major covers, however. Badfinger‘s “Without You” is the first of these to come to mind. The Apple Records group released the song as an album track on their No Dice LP in 1970. Though it was a very good song, their version felt unfinished and raw. But no less a talent than Harry Nilsson fell in love with the tune, and recorded his own version in 1972; he scored a worldwide hit for his efforts. (Mariah Carey added nothing of value to the song in her own 1992 cover, but she got a hit with it as well). He also passes by Translator‘s great cover of the early (pre-fame) Beatles tune, “Cry For a Shadow,” and not once does he mention any off the immortal covers turned out by Mrs. Miller. (To his unending credit, Leszczak does discuss “Senator Bobby‘s” memorable cover of The Troggs‘ “Wild Thing.”

The book is not without its glaring errors, and those are of concern in a book that is meant to serve as a trivia guide. (Imagine if I had used it to contest one of the Rock Trivia answers, only for it to be discovered that the book was wrong! The shame! The horror!) Leszczak discusses Crowded House‘s classic tune “Don’t Dream It’s Over” and the subsequent cover by Sixpence None the Richer; both versions charted. But then he wanders off the reservation by mentioning Crowded House’s follow-up hit, a tune he calls “Something So Wrong” (emphasis mine). Funny choice of word: the actual title is “Something So Strong.”

A bit more egregious than a possibly typographical error is the author’s seeming unfamiliarity with one of rock history’s most notorious episodes. In his discussion of the Rolling Stones‘ “Sympathy for the Devil,” Leszczak notes that when the group performed the song at Altamont in 1969, “…a young girl was killed.” Anyone with a cursory knowledge of the Rolling Stones – not to mention anyone who’s ever seen the Gimme Shelter film documenting the event – knows that Meredith Hunter was an eighteen year old African American male.

There are a few other, lesser, mistakes in Who Did it First?, but overall the book is reliably accurate, and a fun read. The reader will be able to spot instances were the author has conducted first-hand interviews with some of the artists involved (most notably Tommy James), because the entries for those songs are much longer than the sometimes cursory entries found throughout the book. And occasionally, Leszczak’s level of insight seems nonexistent, and sometimes the writing seems designed to do little more than fill the page. How else to characterize such comments as – for example, when discussing Bachman-Turner Overdrive‘s “Takin’ Care of Business” – “It’s a song that compares and contrasts the singer’s life to that of the average nine-to-five worker (letting the listener know that the life of a rock star is far better).” But such empty-headed faux-analysis doesn’t detract from the overall value of Leszczak’s book, and in fact it might elicit a few (unintended) chuckles. No harm done.

Significantly, Who Did it First? never presents itself as something it is not (say, a scholarly work), and its tone is designed for a casual reader, not a trainspotting boffin who can’t help but play gotcha! when reading it. Who Did it First? is a lightweight, fun and informative trip through rock’s history.