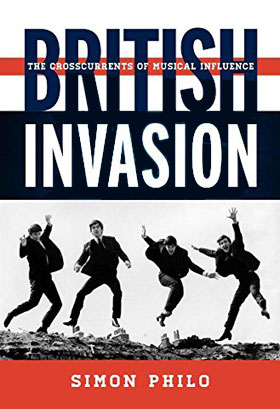 I’ve read countless books about The Beatles, about their fellow British Invasion (aka Beat Era) acts, and about the sixties from both musical and socio-cultural points of view. To say that the overall topic interests me is grand understatement. So I was intrigued when I learned of a new book called British Invasion: The Crosscurrents of Musical Influence. Having some familiarity with other works from the book’s publish (Rowman & Littlefield), I suspected that British Invasion wouldn’t be a pop-culture, general readership tome; no, I fully expected it to lean in a more scholarly direction. And that would be fine by me.

Author Simon Philo is a British citizen who – as he relates in the book’s introduction – first traveled to the USA many years ago. That inaugural visit lit a fire within him to better understand the ways in which British music of the 1960s influenced American music and culture. What an interesting idea, I thought: many books have looked through the lens from the opposite end, charting how The Beatles (and others) were influenced by such things as (a) the film The Girl Can’t Help It, (b) Bill Haley’s UK tour, and (c) records brought to Britain by merchant seamen landing at Liverpool docks (though this last one has been – if not debunked – shown to have happened much less often than many music chroniclers have claimed/guessed).

But considering how the music of The Beatles and other British groups influenced American music at the time (as opposed to in the grand scheme of things) is a topic that hasn’t been done to death. So Philo’s book is welcome. In the earliest chapters – truth be told, the best, most insightful ones among the book’s 150-plus pages – Philo outlines British pop music history, and he does so in a manner that places skiffle and trad jazz (the two biggest pre-rock musical sensations in postwar England) in their proper context. Philo displays a deep understanding of these forms and how they fit into the big picture.

As the story progresses, British Invasion focuses more than one might expect upon The Beatles. Yes, they were the biggest (and I’d say best) among the British musical exports of the era, but the bands that followed in their wake get perfunctory discussion in the book. Philo does a commendable job of outlining the American cultural scene into which The Beatles sprang in early 1964, debunking a few myths of his own (namely, that the country was in a deep depression post-JFK, and that The Beatles single-handedly rescued American consciousness from that malaise). But immediately after making a good case for his viewpoint, he writes (though in far more eloquent terms than I’m paraphrasing), “well, but yeah, they kinda did cheer things up.”

From there, Philo’s analysis is astute, and he makes all manner of useful connections. Still, he all but breaks down every single Beatles album, exploring its cross-cultural effects, and spends little time on the works of any other artists (save The Rolling Stones and Bob Dylan). Granted, since the Beatles had the lion’s share of the hits, they do deserve full discussion. But the work of other groups (The Animals, for example) is perhaps deserving of a more thorough and nuanced analysis than it gets here.

Where British Invasion seems to falter is in its last third: while Philo is very careful to include citations for many of his quotes (and conclusions stated previously by others), toward the end of the book, he makes some serious mistakes. The author discusses (at some length) the genesis of the Byrds song “Eight Miles High,” and while he gets many of the details right, he cites Roger (Jim) McGuinn‘s fear of flying as the source from which his (McGuinn’s) lyric came. The thing is, it was Gene Clark who was uncomfortable in airplanes, and the song featured his lyrics (with help from David Crosby). McGuinn was responsible for the music.

And so on. In the most offhand manner, Philo unquestioningly repeats the long-discredited urban legend that mass murderer Charles Manson auditioned for The Monkees in 1965 (Manson was a guest of the United States Federal Prison System in the years 1961-67). And he seems to think that Abbey Road was met with roundly thumbs-down reviews upon its release (that sounds more like Let it Be). All that said, it’s only because of Philo’s overall careful and thorough approach to his subject that these lazy mistakes are so glaring.

That final third of British Invasion is actually the part in which Philo’s keen observations are the most significant. He discusses the “Britishness” of the Monterey Pop Festival; touches on the (discussed-ad infinitum) contrast between the Woodstock and Altamont festivals, and then breezily discusses the relationship between UK and American music from the mid 1970s onward. But he then jumps back to his own personal story circa 1981, neatly stepping over punk and new wave.

As scholarly works go, British Invasion is good on the merits (Philo strives to make as many original points as he possibly can, and nearly always hits the mark), but it falls down on the details (perhaps a looming deadline resulted in some glossing over of easily fact-checked errors). As a general audience reader, it’s a bit heady, lacking in any firsthand reportage (seemingly all musician quotes are sourced from the works of other writers) and occasionally getting pretty far into the academic weeds. But there’s enough straightforward analysis to make the required few hours spent with British Invasion most rewarding.