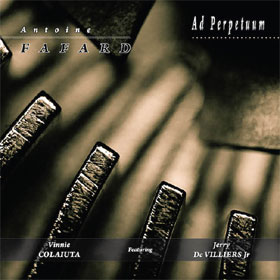 One doesn’t often think of melding progressive rock elements with jazz fusion; at least not if one wants to break even on an album release. But that’s the approach favored by bassist Antoine Fafard. Combining the best of (dare I say) smooth jazz with rock’s muscularity, Fafard is aided in his efforts by drummer Vinnie Colaiuta (Frank Zappa, Missing Persons) and, on one track, the multifarious Gary Husband (a frequent John McLaughlin collaborator and a jazz star in his own right). If Joe Satriani played keyboards and leaned a bit more in a jazz direction, he might sound like this.