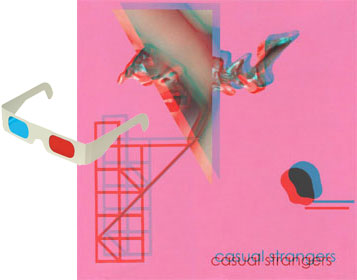 A fellow music lover and good friend of mine is quite wary of what one might call deceptive packaging in music. You know, that thing where a band says that the sound like some other band, or that they’re in some particular subgenre (or when their publicist uses the RIYL* and references another well-known band), and then they sound nothing like you expect.

It happens more often than he or I would like. Oftentimes, my resultant disappointment is enough to put me off the band completely. But occasionally, I’ll find that I appreciate what they have on offer even if it doesn’t sync with how they were being marketed. That’s largely the case with Casual Strangers. On their self-titled and self-released debut (vinyl) LP, this Austin quartet purports to have elements of krautrock and psychedelia in their mix. And while there’s a droning vibe to some of their songs (ostensibly, that’d be the krautrock), and they have male-and-female lead vocals a la fellow Austinites The Black Angels (that’s where you’d check the psych box), Casual Strangers have more of an 80s alternarock sound about them.

Certainly there are elements that at least partially justify the genre associations in their press kit: Moog analog synths on the record, and 3D graphics on the cover (complete with 3D glasses in the package). On the opening track, “Tune Your Brain,” crunchy/grunge-y guitars are supported by thudding basslines and sampled drums. But the song quickly unfolds into something more interesting and deeply-textured. “Casual Strangers (We Used to Be Friends)” has a romantic, slinky feel, and the juxtaposition of gentle picking on electric guitar with warbling synthesizer provides a dreamy air of regret. But when Katey Gunn launches into her spoken-word monologue (complete with “no duh” and “dude,”) I couldn’t help be reminded of Moon Unit Zappa on “Valley Girl,” or Julie Brown‘s “Homecoming Queen’s Got a Gun.” Comedy songs both; I’m pretty sure that’s not the association that Casual Strangers were hoping for.

Several of the songs employ drum machines that give way to real drums; it’s an odd signature, but it pulls the listener into the songs in unexpected ways. The band goes all-out with a stinging lead guitar solo to open “Looking Good.” Coupling that with the song’s male/female vocal dialogue between Gunn and Paul Waclawsky, and you end up with a rocking take on Berlin‘s “Sex (I’m a…).” That said, the tune could use a few more lyrics; here, they’re approaching Silver Convention territory in their lyrical sparseness.

“Banshee” features more of Gunn’s icy spoken-word approach; here she has a sort of Nico feel (without the Teutonic accent, of course). Waclawsky’s soaring guitar is the best thing about the song (and, I’m beginning to think, the album as a whole). “Space Blues” could well be titled “Hey Joe, Part 23.” But the band’s combination of the blues form and a psychedelic feel might remind some of Muddy Waters‘ Electric Mud album. It’s not very original, but it’s fun, and I expect it goes over great live onstage.

“Caribbean Cask” applies the band’s style to a vaguely exotica-flavored tune (courtesy of Gunn’s lap steel), with bonus points for spaghetti western-styled reverb guitar. An instrumental track (save for some “found” vocal snippets), it’s one of the best and most original tracks on Casual Strangers.

The start-every-song-with-a-drum-machine schtick being to wear thin by “Don’t Worry About a Thing.” The song itself is good, full of Dream Syndicate-style melodrama. Here Waclawsky takes his turn at talking-not-singing, which is fine if you enjoy an album filled with that kind of thing.

Despite its drum machine intro (see also: too friggin’ many other tracks here) and yet more spoken vocals (Waclawsky), the guitar and sonic effect on “Cats Meow” make it worth checking out.

The less said about “Put Your Mussy On My Mussy,” the better. It might be a piss-take on early 80s suburban punk; it might not. Either way, listening to it is an annoying way to spend 1:48.

More found audio provides the opening of the album closer, “Casual Strangers (See You Around).” Once the drum machine does its obligatory thing, the brief number serves up a catchy melody. Though it features a too-spare-by-half lyric, its boppy, Cure-like arrangement is catchy. And when I hear the “See you next time” shout-out as the song fades, I want to respond, “Okay, but bring more songs like on Side One and this last bit, leave the drum machine at home, and…sing!”

Verdict: Mostly not psychedelic. Mostly not krautrockish. But not without its charms, in a vaguely 80s retro sort of way.