By 1993, as the first signing of the reactivated Sun Records, Jason D. Williams released Wild. Sessions for that disc took place in the storied studio at 706 Union Avenue in Memphis. “A lot of big name entertainers who’ve recorded there use the word channel. They feel like they’re channeling the greats who have recorded there before them. Not me,” he insists. “That took care of itself. But my reason for being there was that, believe it or not, it was on my bucket list.” Jason had only played there previously, he says, “as a youngster, playing one song on a Johnny Rivers album.” In the 90s, while doing session in Memphis for Dale Watson, Williams thought, “Sun is right around the corner. Why have I never done a session of my own there? I know everybody who’s ever recorded here!” So he did.

“I had my little boy there with me,” Jason beams. “To see him asleep on the floor there at two in the morning was a real joy. My wife would be in the booth, and I’d be in the studio. We’d cut something, and I’d have to step over my son to get back to the engineer’s room. It was fun.”

Eventually starting his own label, Williams followed up Wild with a string of albums, and the titles set the tone: 2004’s Don’t Get None Onya; Rockin’; Killer Instincts; Recycled; and his latest, Hillbillies and Holy Rollers. While the sessions for 2010’s Killer Instincts were initially planned as a mostly-covers project, the strength of Williams’ original numbers – including the standouts “You Look Like I Could Use A Drink” and “White Trash Wife” – tilted the song selection toward new material.

Prior to Killer Instincts, Williams seemed uncomfortable trading on his genetic connection to Jerry Lee Lewis; even today he answers questions on that subject with uncharacteristically brief replies. Clearly he prefers to be measured on the strength of his own work. Still, there’s no denying that Williams’ visual style is highly reminiscent of a young Jerry Lee: stomping the upper registers of the piano with his right foot; his long forelocks dangling in front of his sweaty face; his overall playing approach that is equal parts mania and assured control.

On 2014’s Hillbillies and Holy Rollers, Williams serves up an assortment that is weighted evenly between originals and other people’s songs, but his renditions of the latter are Jason D. Williams through and through. Joe Ely‘s “Fingernails” ends up serving as a theme song of sorts: Williams pounds the daylights out of the ivories while explaining that “I leave my fingernails long so it clicks when I play the piano.” He’s as comfortable playing flowery licks on weepers like Hank Williams‘ (no relation) “You Win Again,” and though Elvis cut the most well-known version of “Mean Woman Blues,” Williams makes the tune his own. And Jason demonstrates his command of uptempo tent-revival gospel with the album’s two final cuts, “Old Time Religion” and “I’ll Fly Away.” 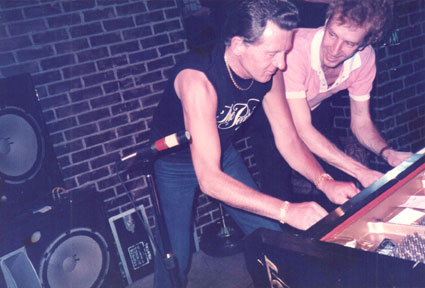 Jason returned to Sun Studio for Hillbillies and Holy Rollers, and the studio’s aesthetic formed an important part of the sound captured there. Williams says that all the album’s songs were recorded in “one take. On everything except ‘You Win Again,’ where I went in and added strings afterward. If we messed up, we’d just start over. And we just had a mic in the middle of the room.”

“You know,” Williams continues, “Roy Orbison said that he became a stronger singer every time he recorded at Sun. He had to sing over the instruments, the way they used to record. And I could certainly see what he was talking about when I recorded there, too.”

Though his trademark sound is to most ears an agressively-attacked acoustic piano, most days Williams plays an amplified Kawai piano. He favors a model that he says the company “stopped making in 1980,” and he has made an effort to find as many as possible of that increasingly-rare model for himself ever since. For live gigs – Williams tours to more than 160 dates annually – he’s joined by guitar, bass and drums. He chuckles and adds that the band is occasionally augmented by “another piece on the end: violin, saxophone, trombone…anything, as long as they can add to the show!”

These days, there are still a few items remaining on Jason D. Williams’ bucket list. Jerry Lee Lewis “lives just down the street; we visit from time to time.” And though it hasn’t happened recently (they have played together informally a select few times), Williams hopes that he will once again get to share a performance stage with his biological father. Until – and doubtless after – that happens, concertgoers will get the chance to see a high energy show that builds on the music foundation of old.

Jason D. Williams will appear onstage at the Martin-Lipscomb Performing Arts Center in Highlands NC on Friday, November 28 (that’s the day after Thanksgiving). Visit his website at www.rockinjasondwilliams.com.

Note: An edited version of this feature originally appeared in print in the September 2014 issue of Stomp and Stammer Magazine.