Jason D. Williams: A Mixing Bowl Combined With a Sponge (Part One)

Though his in-the-grand-tradition bio sheet asserts that Jason D. Williams first played a piano at age three, when I ask him about it, he concedes that his serious interest in the keyboard commenced around his ninth year. “I started taking piano lessons from a local piano teacher. I had a lot of great influences, from [African American blues pianist] Booker T. Lowery to Memphis Slim to classical artists. A lot of jazz greats like Phineas Newborn, too, plus a lot of good, left-hand boogie woogie players. And all points in between.”

Jason grew up in a small south Arkansas town called El Dorado. And there, his schooling in music would expand into some unlikely directions. He recalls, “There was a group of kids – they were a little older than I was – and they were into some of the west coast record labels like Takoma. We’d listen to people like John Fahey, Leo Kottke, George Winston, and Doc Watson. At the time, those were as big an influence on me as anything.” He also consumed a steady diet of big bands and jazz greats; he mentions Della Reese as a favorite. 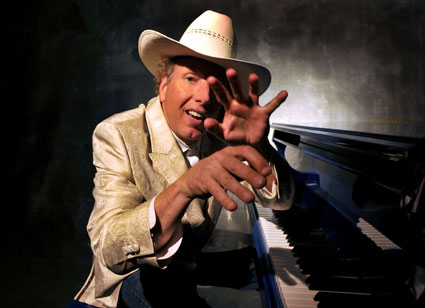 As a direct result of distilling those influences, one of the most fascinating dimensions of Williams’ own music is its variety. Jason is sometimes pigeonholed as a rockabilly pianist, but his style is too expansive to fit neatly into any such box. In his original and carefully-chosen covers, one hears blues, jazz, r&b, country, gospel. And that all-encompassing approach might remind listeners that the music of the early pioneers of rock’n’roll – Elvis, Jerry Lee Lewis, Johnny Cash, Chuck Berry, even Ike Turner – didn’t fit neatly into any one of those boxes, either.

“I was a mixing bowl combined with a sponge,” Williams says, mixing a couple of metaphors in that bowl. “I could watch anybody entertain, from Al Jolson to Jerry Lee to Cab Calloway. And I would take a little bit from each of them.” He muses on the all-around-entertainer nature of vaudeville performers who inspired him: “You had to be able to tap dance, balance stuff on your head. And play upside down. And I got all that from people like Sammy Davis, Jr., and watching old episodes of The Lawrence Welk Show.”

And in fact, though Williams was raised by a pair of loving adoptive parents, he eventually learned that his biological father was none other than the man known as The Killer, Jerry Lee Lewis. Jason was conceived mere months after Jerry Lee’s “High School Confidential” (from his debut LP on Sun Records) scaled Top 40 pop, country and r&b charts. So while he had studied and absorbed the work of many performers and composers, Jason is convinced that heredity played a part: “The style was probably genetically already there.” 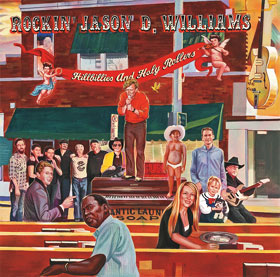 Showing that he has at least a touch of his biological father’s bravura, Williams asserts, “I’m a combination of Joe Namath, Vladimir Horowitz, and Jackson Pollock.” I laugh and then pause, giving him space to elaborate. He doesn’t, leaving me to ruminate on this name-checking non sequitur.

The Jason D. Williams story – or at least the performing and recording part of it – began when he left El Dorado at sixteen. He joined the touring band of rockabilly legend Sleepy LaBeef; he still occasionally performs with the guitarist. At the tail-end of the 1980s, he – or at least his hands – starred on the big screen in the feature film Great Balls of Fire, performing the songs made famous by Jerry Lee Lewis. That same year Williams signed with RCA and cut his first album, Tore Up. On that record, his original songs fit in seamlessly with rocked-up readings of chestnuts like “St. James Infirmary” and Larry Williams‘ 1958 classic “Slow Down.”

A regular solo gig at Memphis’ famed Peabody Hotel (the one with the ducks) increased Williams’ profile. A vertigo-inducing 1990 music video of Williams and band atop Knoxville, Tennessee’s iconic Sunsphere (performing “Tore Up” and “Everybody Rockin’ on a Saturday Night”) does a good job of capturing the excitement of the pianist in a live setting, and showcases his dazzlingly precise speed-riffing on the ivories.