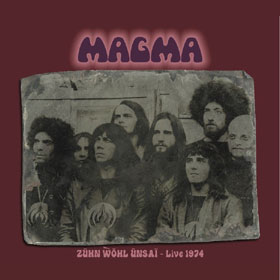 To some – okay, to most – the idea of a progressive jazz-rock group performing music in an obscure language of their own making might seem, laughable, pretentious, or…laughably pretentious. But science fiction based concepts weren’t all that unusual for bands of the 1970s, especially European prog outfits. So if one can set aside reservations about the lyrical approach, then the music retains its potential to impress on its own merits.

It’s relatively easy to take this more open-minded approach when it comes to a band such as Magma, because that group – founded in 1969 by Christian Vander – probably would have sung in French, which you probably don’t speak any more than you do Kobaian. So for Anglophones, the music of bands like Grobschnitt (and, to a lesser extent, Gong) and Magma can be judged from a musical standpoint, which makes more sense anyway.

Magma’s convoluted story-songs concern themselves with the story of refugees from the planet Earth, searching the galaxies for a new home in the wake of their old planet’s ecological catastrophe. But to these ears, Magma’s music is instrumental with, let’s say, some odd vocalizations.

In the period 1970-1978, Magma released six or seven studio albums (depending on how one counts), and a pair of live sets. The first of these, Live/Hhaï, documented a 1975 Paris concert that included two of the six movements of their 1973 opus, “Mëkanïk Dëstruktïẁ Kömmandöh.” That extended piece never appeared in a complete version on a live Magma album until this newly-released 2CD set, Zühn Wöhl Ünsaï – Live 1974 (yes, Magma makes things quite difficult for anyone attempting to cite song or album titles in print). The sprawling “MDK” runs in excess of thirty-five minutes, so for fans of the group, this new set represents the first opportunity to hear it in its entirety.

As with many of their European prog forebears, Magma’s music is heavy on strident percussion. As the group’s leader, visionary and lyricist and drummer, Vander was in the ideal position to push the group in the direction he sought. The particular lineup that is featured on Zühn Wöhl Ünsaï would never make a studio album; by the time they entered the studio to record a followup to MDK, guitarist Claude Olmos had departed, to be replaced by – of all people – Welsh guitarist Brian Godding, late of Blossom Toes.

So there’s at least two reasons for any fan of Magma to want this album: the rare set list and the rare lineup. But what about the rest of us: why would we be interested? The answer is pretty straightforward, if one is a fan of that challenging nexus wherein rock, jazz and experimental music all convene. Intricate meter changes, hypnotic and dexterous electric piano lines, and unpredictable shifts in tone and volume: all of the characteristics that make up the best (and, true, the worst) of progressive rock are all here in copious amounts. After a few minutes of listening to the music, the obscure vocals – though quite prominent in the mix – take on the role of just-another-instrument. Vander does introduce each piece in Kobaian, his voice treated through what sounds like a ring modulator. It’s odd stuff to be sure, but also oddly alluring.

The second disc features two more extended tracks: “Kourusz II” is a lengthy drum solo that would not appear on record in any form until a 2000 CD of the same name collected two and half hours of Vander solos. The space-rock-meets-space-classical a la Holst piece “Theusz Hamtaahk” is even longer; it, too would remain unreleased in any form until the early 1980s.

The 2CD set was originally recorded for and broadcast by Radio Bremen (Germany), and that should tell most listeners all they need to know about the recording quality of this set: it’s excellent.

Put simply, Zühn Wöhl Ünsaï is some crazy stuff, but for the adventurous, it’s well worth the trip. And for those already familiar with the weird and wonderful world of Magma, it’s an indispensable addition to the shelf.