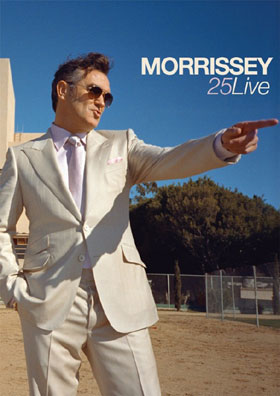 In pop culture, certain truths evolve into long-running inside jokes. For example, if you booked Sly Stone for a gig, you could count on him (a) not showing up, (b) showing up right around the time the gig is supposed to end, or (c) walking out the stage door mid-act to “take a pee” and then not returning. And with former Smiths vocalist Morrissey, buying an advance ticket to a date on one of his tours is akin to buying a Powerball lottery ticket: your odds of getting an return on your investment are one in a million.

Well, okay, it’s not quite that bad. But just last week Moz announced the suspension of yet another tour, this time due to him ostensibly catching a bug of some sort from his opening act. Yeah, whatever. Terminally precious, Morrissey has a long history of this sort of behavior, and his long-suffering fans continue to buy tickets. They’re the music fan version of Charlie Brown, and Morrissey is Lucy van Pelt with the football. Aaaargh!

But the elusive fact remains: the man does occasionally put on a show. And when he does, it’s often very, very good. While there’s no documentation letting us know just how long the film crew had to follow him around to actually catch a show, the new DVD 25Live is a full concert performance. Morrissey and band appeared onstage at Hollywood High School in March 2013, and the entire show was filmed and recorded.

The DVD opens to the strains of The New York Dolls‘ 1971 classic “Looking for a Kiss” (superfan Moz was instrumental in getting the Dolls to reunite a few years back). Black and white backstage footage is shown, with brief fan interviews letting us know just how hardcore Morrissey’s fans really are. (This fact will be hammered home as the concert gets underway.)

The production values – both onstage and in the DVD – matter-of-factly put forth the idea (accurate or not) that Morrisey is the world’s biggest star. Everything about the DVD is top-notch and professional. The band – all dressed in matching jeans and t-shirts – perform flawlessly, yet with the fire and passion that Morrissey’s emotional (though generally not “emo”) songs require. And the man himself is on-key throughout, and is seemingly having the time of his life in front of the capacity crowd of young fans.

The band charges through a pleasing survey of Morrissey’s solo material, sprinkling the set with plenty of Smiths classics. Morrissey’s lead guitarist (and musical director) Boz Boorer does a fine job of conjuring Johnny Marr‘s original licks, and his own personality shines on the newer material. Morrissey’s curious blend of upbeat music wedded to somber, melancholy lyrics (the crowd happily sings along: “You have killed me, you have killed me”) is well served by the performance, the venue, and the audience.

The editing of the DVD leans in the direction of warts-and-all, though there really aren’t any warts. Morrissey’s cryptic in-between-songs banter is included, as are the count-ins. The 21st century ADD technique of endless quick-cutting is in full flower here: rarely does any one camera angle linger onscreen for more than two or three seconds.

At one point, the singer hands the mic over to some front-row fans, affording them the chance to preserve in high definition audiovisual their fawning spoken tributes (Example: “Thank you for the life lessons you’ve taught us”). Though one suspects — hopes? — such words would make a performer squirm just a bit, for his part Moz doesn’t seem to mind. And during the encore, when Moz carries around a little boy — handed up from the crowd while wearing his Smiths t-shirt — one can clearly see the beefy security personnel manhandling the front-row crowd to keep them offstage. At that moment I couldn’t help recall the “Sally Simpson” scene from The Who‘s Tommy, such is the near-messianic stature Morrissey seems to have among his fans.

The DVD’s title 25Live refers to the number of years in Morrissey’s career to date; the video includes nearly as many songs. And considering the disc’s relatively modest price – about twelve bucks for the Blu-Ray, a bit less for the DVD – it represents a sure-fire way to enjoy an evening with Morrissey. (There’s no truth to the rumor that every other copy of the disc features footage of a silent, empty stage.)