A deep love and understanding of Celtic cultural and musical traditions; a foundation of classical training; and a fresh look at celebrating the Holiday season: that was the recipe for “Christmas in Scotland: Seasonal Music and Stories from Celtic Lands,” a holiday show at Asheville’s Isis Theatre on December 27, 2013.

Hosted by award-winning fiddler (and Asheville resident) Jamie Laval, “Christmas in Scotland” featured music and storytelling focused on the season. But not, perhaps, the season you’d think. While Laval acknowledges that “we have our own signature music from Appalachia,” he notes that “by the time Scots-Irish settlers came to this area, the Christmas music tradition had already been well-established. A lot of the traditional carols that we all know and love had existed for centuries.” 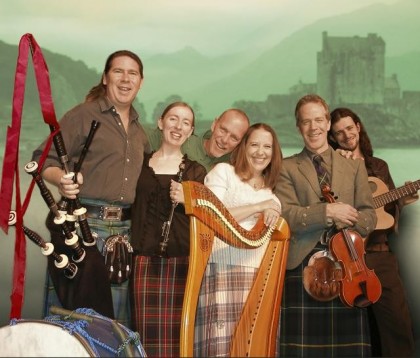 “Those were village dance tunes,” he explains. “The church took a hold of them, slowed them down, and added Christian-based lyrics to them. By the time the settlers came here, the tunes were thought to be regular Christian Christmas carols. But if you look way back, that changeover from being pagan-based holiday music had already long since taken place.”

And it’s those pre-Christian traditional village folk dance tunes that Laval and his compatriots would play at this special performance. “I’ve made my specialty in really, really ancient Scottish music, Laval says. “And I try to give a fresh spin to it.” Laval is well-suited to such an ambitious goal: he began his formal musical training in British Columbia at the Victoria Conservatory of Music, where he studied classic violin. But he quickly fell in with the region’s folk traditions. “My first summer job was playing chamber music in the lobby of a grand old lodge,” Laval recalls with a chuckle. “Everyone who worked at the hotel had a tendency to spend off-days at the grange hall dances. So after being in music a very short time, I started doing square dances, barn dances.” Initially, those folk dance events were a mere sideline and hobby for the young fiddler. “But,” he continues,” over the years, as I pursued a classical career in symphony playing, I got better and better at the folk music.” He says that he eventually devised his own style, a “signature rendition of Scottish and Irish” traditions within the framework of the Celtic music format.

“Ten or twelve years into classical music,” Laval recalls, “I realized that my heart was really leaning more toward folk music than classical. I made a decision to turn a corner. He went out in style, though: his final classical gig was Puccini’s Madame Butterfly, performed with the Seattle Opera. “A grand send-off,” he laughs.

Celtic music is handed down through note-for-note re-creation of the tunes. Asked if he finds that relatively strict format limiting or liberating, Laval chooses the latter, and attributes it to a characteristic one might not think to associate with the style: groove. And, unlike classical, “the liberating part is that there’s no requirement to be faithful to a score.” In folk music, Laval points out, “it’s perfectly permissible to re-render the music in a different tempo, a different harmonic structure, with different emotion.”

Reflecting on the universal appeal of folk music, Laval suggests that humans are “hard wired for rhythm.” Moreover, he says, “I understand the depths of emotion that come across through folk music.” That, he says, is due in part to the fact that “folk music is the product of not one composer, but a collective body of people as the music is passed from one generation to another. It gets imbued with the sentiments of each of its contributors. And so the music ends up being an expression of a people, of a whole culture.” In Celtic music, Laval hears the “yearning and longing and struggle and triumph that’s built into that long tradition.”

And that culture – with its long-held pre-Christian traditions – was the focus of the “Christmas in Scotland” show. “This is a chance to put together the kind of lineup I don’t usually get to play with,” says Laval. He customarily performs solo or with a very small group. Bigger ensembles usually necessitate large venues and large stages, with the accompanying divide between performer and audience. Laval promised that “Christmas in Scotland” at the Isis, would be “intimate, but yet I get to work with dancers. And that’s always fun.”

An edited version of this feature ran in the December 25, 2013 issue of Mountain Xpress.