Bill Kopp: Continuing on that point, if I may. As much as I like the Golliwogs and Blue Velvets material, musically it – especially the earliest tracks – really doesn’t sound a lot like what we’d eventually come to know as the Creedence Clearwater Revival sound. Not just because Tom was singing lead, but the overall musical sound was different. Was it a case of one day hitting on the sound and the light bulb sort of went on, and everybody said “yeah, that’s it”… or something else?

Doug “Cosmo” Clifford: It wasn’t an overnight sensation. It’s evolution, really. When we started making records as Tommy Fogerty and the Blue Velvets, the rock’n’roll style that we were playing was certainly different than what we ended up doing. But the evolution took time; we switched lead singers as well. I was very happy that we went that direction, because I was really heavily influenced by r&b and the black artists of the day. Not leaving Elvis out, or that side of the coin, but I liked the r&b stuff better, as a drummer. It was something that grabbed me. 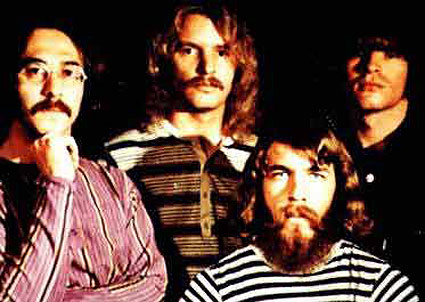 BK: Everybody knows that it’s John Fogerty‘s name on the composer credits for most of the songs. But as far as the arrangements, how in general did those develop: did he come in with a new song and tell everyone their parts, or did he make demos of them by himself (like Pete Townshend did with The Who)?

For example, “Suzie Q.” We were playing in the clubs, five sets a night. And we needed to stretch material out! We were a Top 40 band. So we stretched that one out. But what happened is that I came up with the quarter-note feel – it had been a rockabilly song – and that change brought it more into a dance groove. And that’s the same thing that “Born on the Bayou” has: a quarter-note feel with accents. But there, I changed the bass drum parts. Taking out half the notes gave the songs more power; that was a trick I learned – again – from r&b.

I’ll give you an example that will summarize it for you: in the four years that we were Creedence Clearwater Revivial, we had twenty hits or whatever. And once John got rid of the guys who were “holding him back,” he’s had two top ten singles in forty years.

DC: You read stuff [about Stu Cook and me] that says, “all they did was complain; they wanted to sing songs.” That’s bullshit! Tom wanted to sing songs. And Tom should have sung songs. We owed him; he brought us along when we were only thirteen years old, backing him up and starting the recording process. It was Tom’s dream, and he was a guy with a house, and a mortgage, and a regular job. And he gave it all up. It was courageous. And he shared it, handing the reins over to John. And how was he repaid? “Sit down and plan rhythm guitar, and shut the fuck up.”

Stu and I always took Tom’s side, so that put us in the doghouse. We weren’t saying we wanted to write or sing songs. What we were complaining about was the business. John – control freak that he is – had to be in charge of everything. And he lost the most: he doesn’t own his own songs to this day.

When we touch on those issues, I get a bit riled up. Because it was all so stupid.

BK: For both you individually and for CCR as a band, was the goal of live performance to re-create the studio versions, or was it an opportunity to re-frame them, to stretch out a bit, to put more of your own stamp on the songs?

DC: It was to push the album. We didn’t stretch much; the only time we did that was on “Keep On Chooglin’” and it was a sort of repetitive shuffle beat. That was the last song in our shows.

Another classic example of [John] punishing the guys in the band: we were playing a sold-out tour date in a basketball coliseum, somewhere in the Midwest. It was so loud, I thought the building was gonna come down; it was like a freight train, like standing next to it on the track. The building was shaking. We finished the show and went into our dressing rooms. I was pretty pumped up. I get pumped up; I’m a drummer. So we had three encore songs from which we would pick, and I asked, “John, what are we gonna do? What songs?” He said, “We’re not going to do an encore.” I laughed. And he shouted, “We’re not doing an encore! Encores are phony, and from this moment on, Creedence Clearwater Revival will never do another one!”

I said, “You’re wrong. You’re wrong.” and I went blind with rage. He was sitting at a table; I picked the table up with him on it, raised it up and he fell off, rolling against the building. Everything was in slow motion now. I realized that I had the table up over my head. I dropped it, and the legs broke off. I said again, “You’re wrong. You’re wrong.” And then I said, “Beer in the dressing room!” because up to then we weren’t allowed to have beer in the dressing room. I wanted something as a concession, and that was the only thing I could think of.

We never did another encore, and that was the beginning of the end. To me, when you go out [onstage], you’re going out to earn that encore.