Mention the name Van Duren to a powerpop fanatic and you’ll likely get a reply that’s equal parts gushing enthusiasm and reverent tones. While he’s not well-known among the pop landscape in general, those in the know consider his debut LP Are You Serious? (1977) in the same class as the music some of his more famous friends and fellow Memphians put out. Said friends included Big Star, The Scruffs, Tommy Hoehn and a select few others. In fact Jody Stephens and Chris Bell played with Duren in a post-Big Star band called the Baker Street Regulars (sadly that band never released any recordings). His highly melodic compositional style – stylistic similarities to early Todd Rundgren and Emitt Rhodes can be heard – coupled with his clear, expressive voice makes for some highly appealing music.

Duren has never been the most prolific of artists (eleven albums; on average, one every four years) and much of his back catalog is difficult to locate (used vinyl copies of Are You Serious? fetch upwards of $90, and that assumes you can even find them). His Allmusic discography doesn’t even list all of his output: 2010’s Resonance Road isn’t mentioned, nor is Chronicles, the (undated) “authorized bootleg” anthology of his band Good Question. But any and all of his music warrants the effort required to find it.

And it’s gotten a bit easier of late: his partner in Good Question is Vicki Loveland. And the pair have just released their first collaborative album (credited to LovelandDuren), Bloody Cupid. Though I was lucky enough to meet Van during a musical pilgrimage of mine in 2011, and remained in touch with him ever since, we didn’t schedule an interview until now. Last week I spoke with Van and Vicki about the new album. 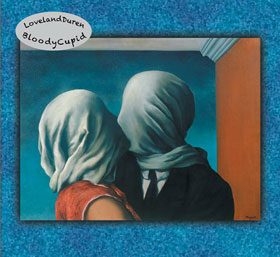 Bill Kopp: Van, I know a good bit of your musical history. But Vicki, you seem to be coming at things from a different place musically. Tell me a little bit about your background.

Vicki Loveland: If you want to start at the very start, my mom was a big band singer. I was the youngest of four kids, and I was around my mom when she was doing gigs. And my father was a deejay in Jacksonville FL, where we lived when I was very little. So I’d go to the radio station with him, and hear all kinds of music. And we had a very musical family, so as I grew up, we all sang together. We moved to Memphis when I was about five years old.

And my older sister had a band; when I was about 12 years old, she started playing. I’d come along to her rehearsals. By the time I was 14, I was doing gigs with her band when she couldn’t do them. I got the call to have my own band as a result of all that, and so it all sort of organically just happened. I knew that playing music was all I ever wanted to do; I loved it form the time I was able to understand that I could sing.

I started doing session work when I was about 16, and went on the road as soon as I got out of high school; touring, I traveled all over the USA. Van and I met each other doing session work. Later, I went back and got my degree in Music at the University of Memphis; I was in their Recording Technology program, so I got to spend some time on both sides of the glass.

BK: This question is for both of you. Tell me about the songwriting process. Do you sit down together an create songs from the ground up, or do you start individually and then help each polish the songs, or something else?

Van Duren: It happens both ways. Sometimes I’ll bring in a musical idea that I’ve been working on that very day, and we’ll sit down across from each other with a guitar, and take it from there. Sometimes it starts with a lyrical idea that Vicki has; she brings it in, and we do a version of the same thing. It comes from different sources, but every one of those songs [on Bloody Cupid], we sat across form each other and wrote together. 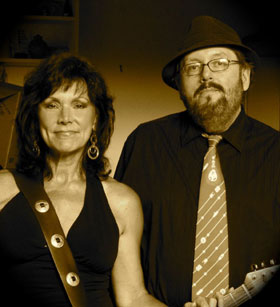 VL: We actually went down to Gulf Shores AL [about a 7-hour drive south of Memphis – ed.] and wrote for an entire week. We came up with five or six songs, and it just kept flowing. So we ended up with the twelve songs that are on the record.

BK: The track “Lines in the Sand” has that timeless quality, that trademark sound, that – for me – means it would have sounded right at home on Are You Serious? But having the male-female lead vocal harmonies takes it to a different place. I know you’re both on all the tracks, but the sequencing of the album reminds me a little bit of John and Yoko‘s Double Fantasy, in that it seems to bounce back and forth between tunes that feature Van a little more, followed by tunes that are a little more Vicki. Is that right, and if so, was it intentional?

VD: You’re absolutely right about that, the variation. Not only the who-sings-what, buy the stylistic variation of the material. First of all, I insisted that we start the record off with something Vicki sang. Because people like yourself who are familiar with what I’ve done in the past, I didn’t want that to be the pattern. I had to talk Vicki in to that, but she finally agreed.

But beyond that, some things are strictly a duet, some with mostly her singing, some mostly me, and all shades in between.

VL: What happened with the songs that we wrote, we didn’t sit down and say, “All right, let’s write a song for you to sing,” and so on. It just sort of happened that way…

VD: We didn’t start out to say, “We need this many Vicki songs and this many Van songs.” It really just ended up that way; and the sequencing was the last thing we did. It was almost serendipitous, if you will.