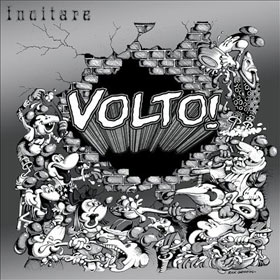 In the related and sometimes overlapping fields of marketing and customer service, “bait and switch” is – quite rightly – considered a bad thing. Drawing a potential customer in with promises of one thing only to deliver another (or worse yet, a sales pitch for another) is considered an unethical practice.

But somehow when it’s done in music — especially when there’s no malice of forethought, it seems okay to me. A case in point is the new album Incitare by an outfit calling itself Volto!. Volto! (the exclamatory is part of the name) is an augmented trio (three guys plus an auxiliary sorta-member) that plays a kind of instrumental music. What kind? We’ll get to that in a moment.

The trio includes Danny Carey of Tool on drums, Pigmy Love Circus‘ John Ziegler on guitars, and bassist Lance Morrison, the last of whom has played with Alanis Morisesette and Don Henley. On Incitare, they’re joined by keyboardist Jeff Babko; he might not be a full-fledged band member, but the depth of his playing suggests he doesn’t know this. Tool, of course, is a kind of prog-metal group, and Pigmy Love Circus is (or was) punk-metal. Both Morissette and Henley, despite what one might think of them, are decidedly mainstream artists.

So it’s something of a surprise to hear Volto!, because they sound nothing like any of those. Yet the bait-and-switch continues: if you had to guess, you might expect Incitare to sound like metal, or to be some sort of progressive rock outing. But though there are elements of both of those styles, what this album really is, is jazz.

Now, we’re not talking Wes Montgomery guitar jazz here: Ziegler’s thick and distorted tone has much in common with the sounds Joe Satriani coaxes from his axes. Yet the songs and arrangements seek to hybridize Satriani’s style of tuneful yet power-packed instrumental prowess with the complexity of jazz. On some level, then, Incitare is a fusion album.

All four players approach the project giving their all. And it’s a balanced record. While on “Billz” the band musters behind Ziegler’s massive riffage, they feature Babko’s organ out front for long sections of on “Whopner.” Babko’s keyboard textures aren’t radical; they’re mostly recognizable organ stops, synth patches or warmly familiar Rhodes sounds, but the manner in which he plays them is where the interest lies. Echoes of Jan Hammer‘s 1970s work are evident on the fleet-fingered “Tocino.”

Ziegler, on the other hand, makes serious use of effects; oftentimes the kind of sound he cranks out is nearly as interesting as the notes through which he delivers it. And Carey’s role shifts between the more traditional (read: rock) approach of laying down and maintaining the beat, and doing something much more musical: on the jazz-metal of “Drumbeaux,” he trades licks (after a fashion) with Ziegler.

Jazz purists – should they still exist in 2013 – might be put off by the more metallic elements of Incitare, but they shouldn’t. There’s a level of accessible complexity at work here that adds to both genres: jazz and rock. But for those more inclined toward the jazz end of things, “Quirk” is likely to hit the sweet spot. Deft fretboard work is laid atop some tasty jazz chords, and some of Babko’s most effective (yet understated) work on the record. “BHP,” however, has sections that might conjure thoughts of Opeth. But even those are offset by knotty jazz sections that recall early 70s fusion. There’s an improvisational bent to the record, and that’s a function of the fact that all tracks on Incitare were first, second or third takes. That’s most obvious on the free-form noisefest “Meltdown,” but it’s evident on all of the tracks.

What’s perhaps most interesting about Volto! is that while on paper, one might expect them to sound a bit like modern-day King Crimson, they don’t. Not a bit. They feel more like Pat Metheny‘s band fronted by Steve Vai. Or something. The high melodic quotient draws in more conventionally-minded listeners, while the instrumental prowess and ambitious arrangement will tantalize and satisfy more adventurous listeners. Recommended.