Initially a Swedish death metal band, Opeth has since its 1990 inception in Stockholm expanded both its sound and its appeal. While the band was an exemplar of the hard-edged sound, they have proven to be masters at mixing metal and melodicism. In May 2013 the band played a twelve-song headlining set at Asheville’s Orange Peel. Days before the show, I spoke with drummer Martin Axenrot. 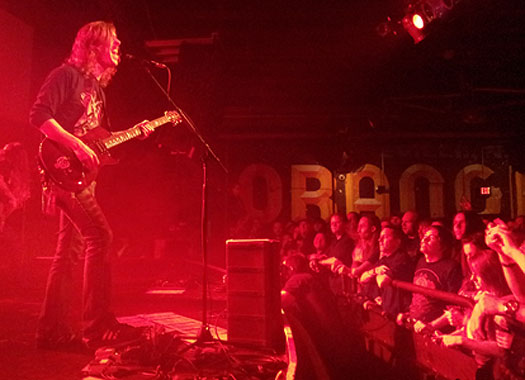 Axenrot is currently drummer in two bands besides Opeth (Swedish speed/death metal bands Bloodbath and Witchery). I asked him if he adapts his style to fit the different bands. “I listen to hear what sort of things they’re [each] searching for,” he says. Axenrot stresses the importance of getting it right, avoiding what he calls the “Arnold Schwarzenegger in a romantic movie” effect.

Mikael Åkerfeldt essentially writes all of the music for Opeth. When he brings the songs into the studio, he creates demos for them. But he affords his band mates creative latitude: for 2011’s Heritage, Axenrot says, Opeth “played the songs live in the studio” and, in the process, refined each of their individual parts. Åkerfeldt did, Axenrot chuckles, “tell us what he thought of what we [each] did. But mainly, we recorded the drum parts live.” He makes the point that it is more important to “play what the song needs than to just play a cool drum part.”

Axenrot played on one track on 2005’s Ghost Reveries, and then everything on Watershed (2008) and Heritage, plus two live albums The Roundhouse Tapes (2007) and In Live Concert at the Royal Albert Hall, released in 2010. He has been a key member of the band as Opeth has transitioned from strictly death metal to a balance between that and progressive rock. “That was my fault,” Axenrot laughs. “We lived together very much on tour, and we talked about it a lot. We thought it would be cool to [make] an album where we show different sides, maybe, of the songs we had done before.” (On the night I saw them at the Orange Peel, Opeth recast “Demon of the Fall” from their 1998 album My Arms, Your Hearse into a lovely – and highly effective — acoustic piece.) So that approach informed the compposition and arrangement of the songs that would form Heritage. But Axenrot stresses that this varied approach isn’t really that new for the band: “All of us have always done different sorts of things on all the albums.”

Nonetheless, the shift from death metal to an embracing of a wider array of styles has had some other effects upon the band. “Maybe the crowd is a little older now,” Axenrot observes. And he notes that younger fans “are interested in some of the older bands; they want to know who we ware influenced by.” Many fans – especially those for whom death metal is not their preferred genre — came to learn about Opeth through their connection with Porcupine Tree‘s Steven Wilson, a frequent collaborator of Åkerfeldt’s, and co-producer of some of their albums including 2003’s breakthrough Damnation. Axenrot says that his own father initially didn’t greatly enjoy the harder-edged side of Opeth’s music, but that eventually it grew on him and “he understands it” now.

Opeth’s stage show avoids the spectacle common to some rock acts; Axenrot says the bands avoids the “pyrotechincs; it’s about the music.” Onstage, Åkerfeldt and Axenrot are joined by Martín Méndez on bass, guitarist Fredrik Åkesson, and Joakim Svalberg on keyboards. They prefer to let the music speak for itself, serving up a mixture of growling, thunderous death metal and soaring, prog/space-rock textures.

Heritage was released in September 2011, more than a year and a half ago. And at present the band is in the midst of a tour. But Axenrot says that “Mikael has a few songs already. You never know if those songs are going to be the ones on a new album, though,” he cautions. He hopes that – after the tour and some festival dates – Opeth will enter the studio “late this year” to begin work on a studio followup to Heritage.