It’s the rare modern act that bridges audiences young and not-so-young. Australia’s Tame Impala is one such act. In the studio, the Australian Tame Impala is essentially one man: Kevin Parker. An unabashed sixties music fetishist, Parker crafts the music (two albums and an EP to date) doing all of the playing, songwriting and singing himself. But for the first full-scale tour of the USA, Parker assembled a band to play the music. 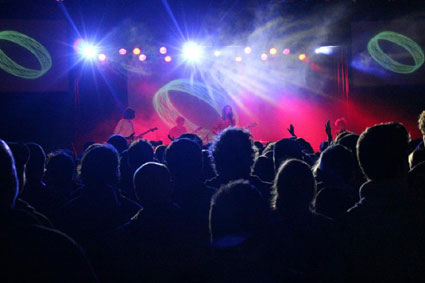 With a dreamy, psychedelic sound that owes serious stylistic debts to John Lennon and Todd Rundgren, Tame Impala still manages to come off modern enough to appeal to listeners not well-versed in the musical aesthetic of 1960s and 70s rock/pop. By folding in modern elements such as looping and sampling, Parker creates a sound that draws form the best of old and new. ( A friend of mine offers that Tame Impala sounds a bit like “Dungen, but singing in English.”) And while the 2010 debut album Innerspeaker begins to sound a bit samey when played all the way through, there is enough creativity at work – and plenty of hooks among the swirling drone – to keep listeners’ attention.

Tame Impala branched out its sound for 2012’s Lonerism, a release which deftly avoids the dreaded sophomore slump. Both a commercial and critical darling, Tame Impala seems poised for further success. The group’s February 2013 show at Asheville’s Orange Peel followed the same set list they used on most other dates around the time, but when it works, it works. Playing to an enthusiastic packed house (the show sold out far in advance of the performance), the live lineup of Tame Impala tore through their catalog, unafraid to front-load the set with some of their more well-known (and best-loved) numbers. “Solitude is Bliss” was wheeled out a mere four songs in, and they closed the set (relatively brief encore notwithstanding) with an especially effective reading of what may be their best number, the non-LP “Half Full Glass of Wine.”

Had scheduling permitted, Tame Impala could easily have booked a multi-night string of dates in Asheville, and other dates on the tour (still in progress ta press time) have been equally well-received. But there’s wisdom in the leave-’em-wanting more strategy. A band to watch.